Blandford Nature Center offers outdoor educational programs on 143 acres of land that is rich in wildlife. Founded by Mary Jane Dockeray in 1968, the nature center has a visitor center with classrooms, a working garden, and dozens of historic buildings for demonstrations. Several walking trails take visitors through forests, wetlands, and meadows. Outreach and community engagement is at the heart of Blandford’s programs and annual events, which include edible plant walks, maple syrup making, and storytelling evenings.

The nature center is also a wildlife rehabilitation center for owls such as this one. 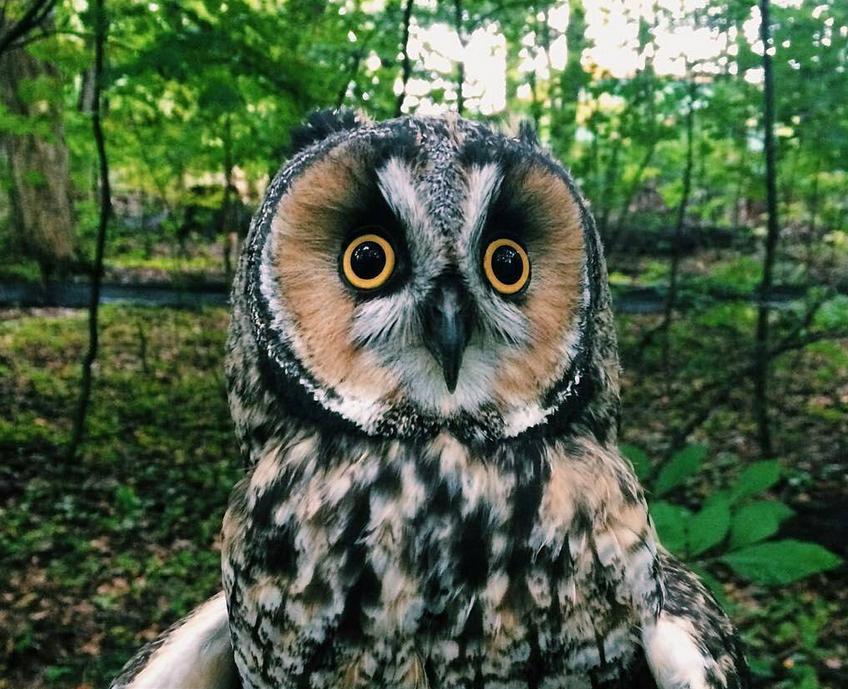 The front desk of the visitor center, built in 1968

Classrooms at the visitor center 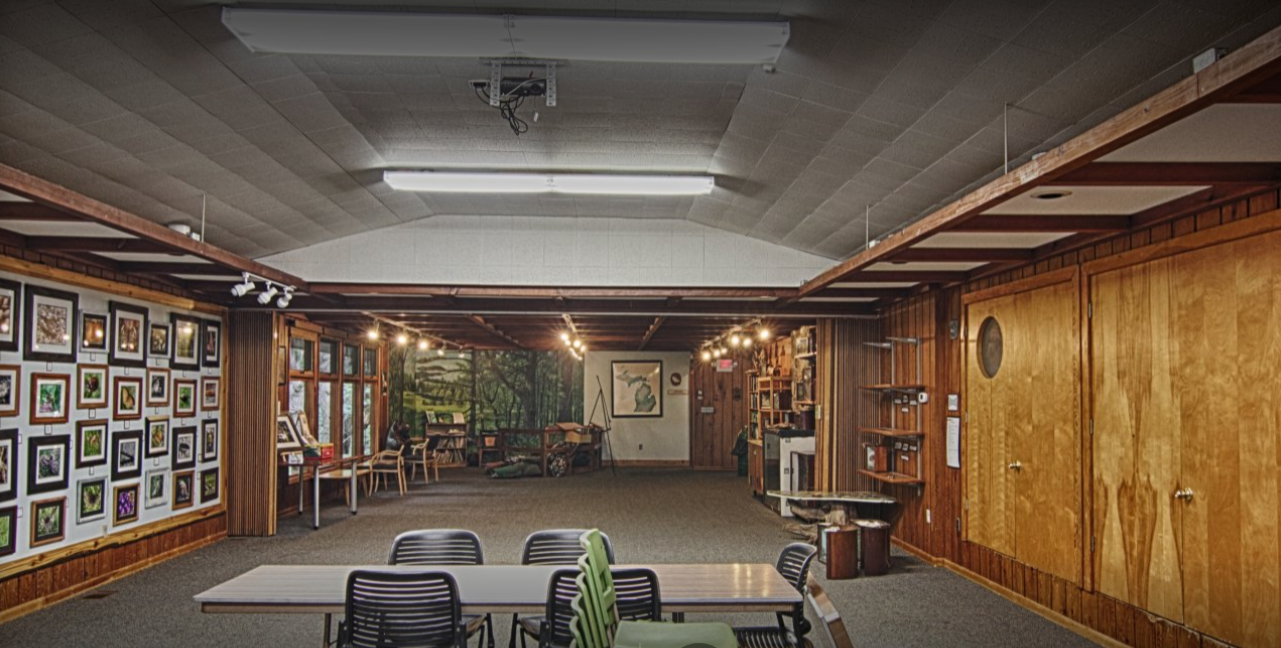 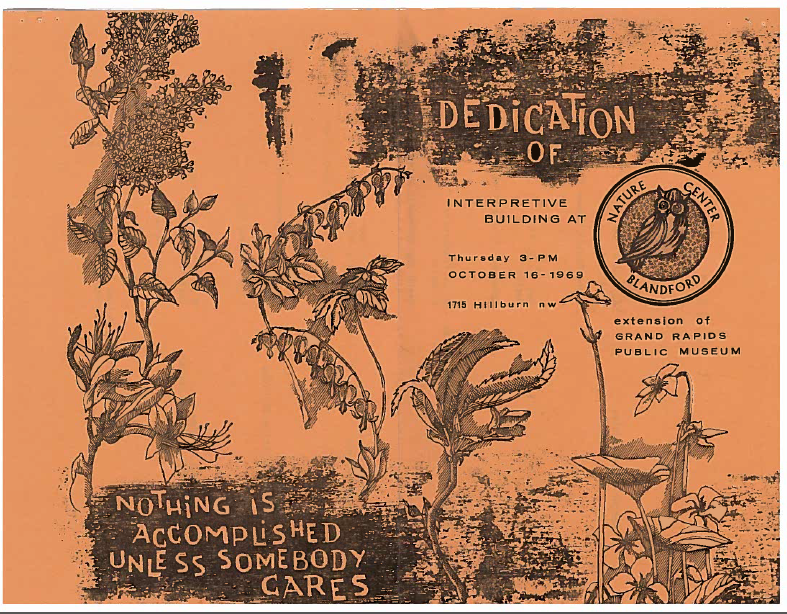 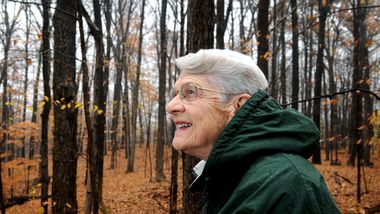 The sugarhouse, where maple syrup making demonstrations are done in late winter/early spring 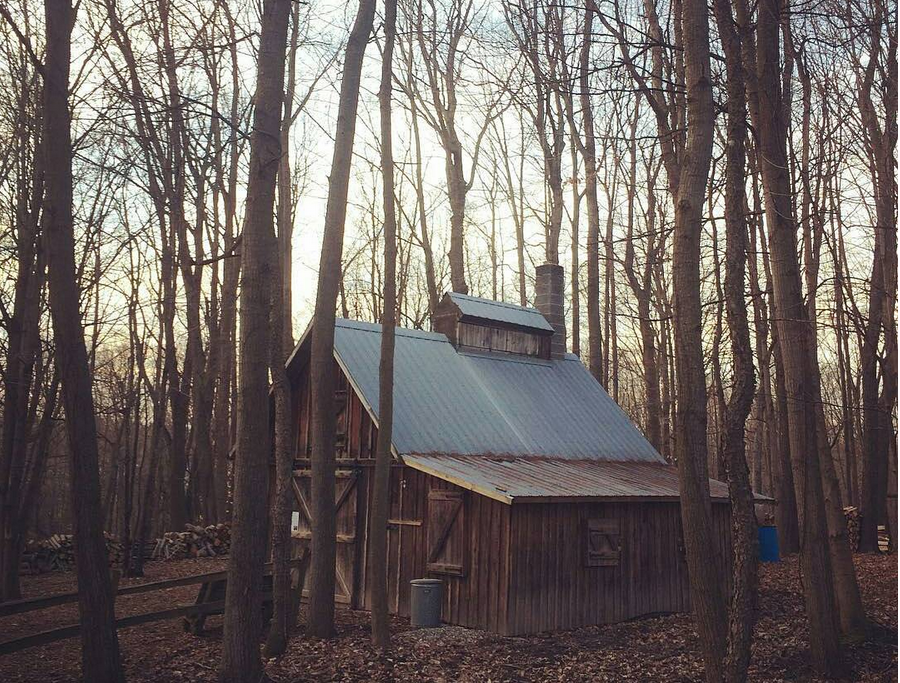 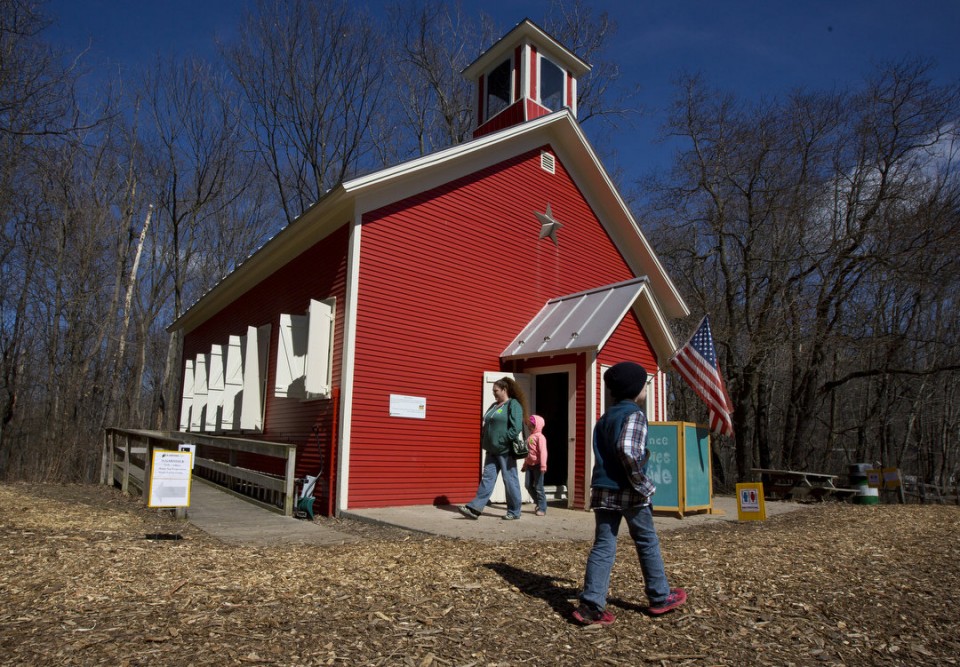 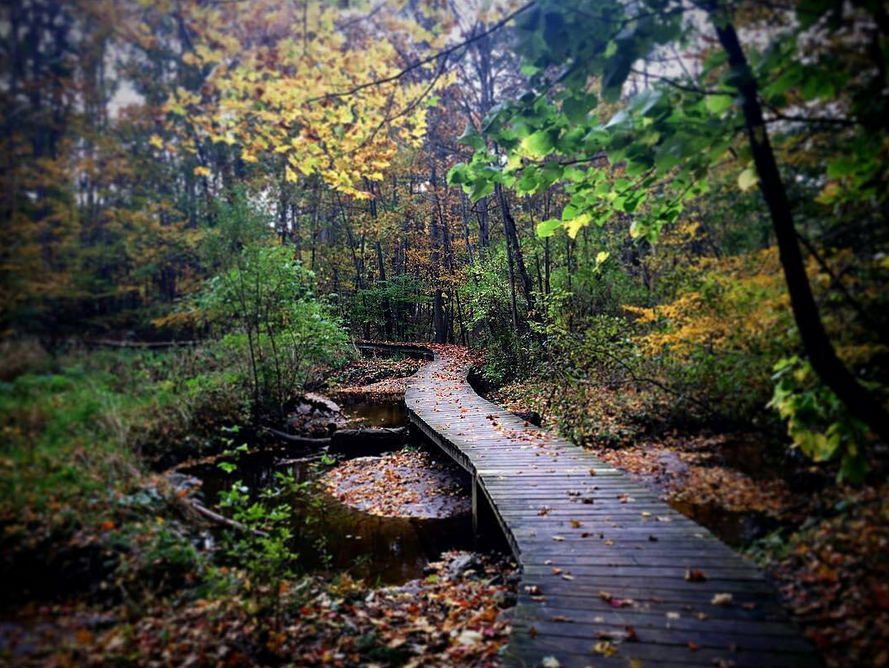 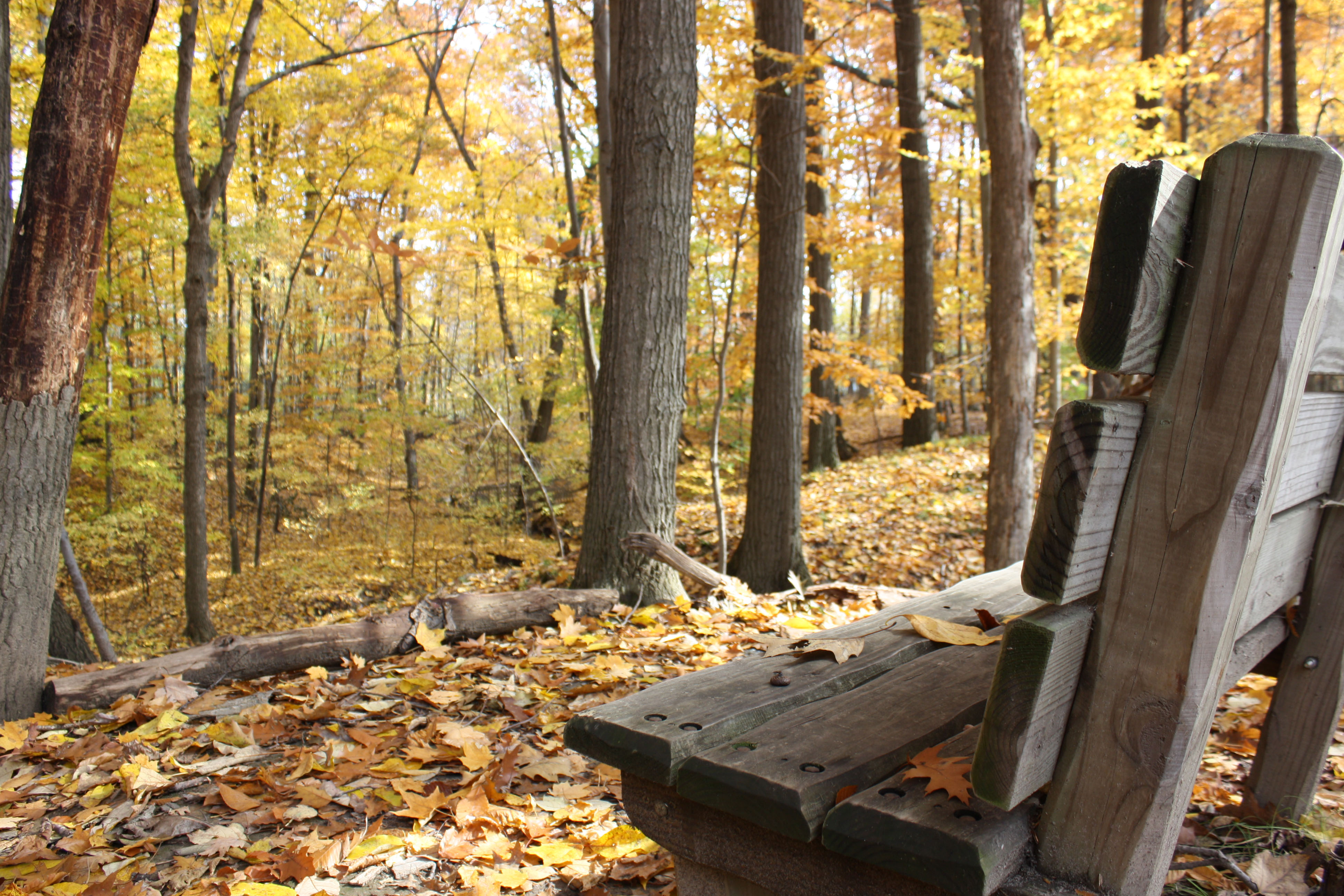 A map of the main part of BNC 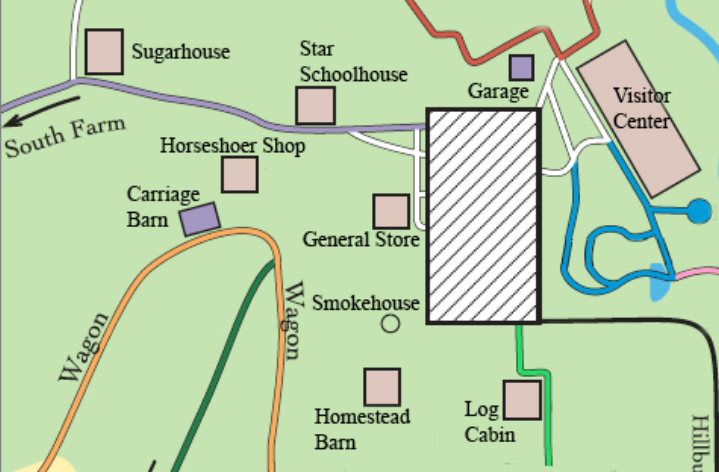 The story of Blandford Nature Center begins with Mary Jane Dockeray. Dockeray grew up in the 1930s playing with her friends in the forest known as Collins Woods near her parents’ chicken farm on Collinwood Avenue (now Collindale Ave)1 While on a walk one day with her aunt, Dockeray was amazed to learn that there were names for different types of rocks. She resolved then and there to study all the names and eventually went on to earn a degree in geology, with advanced degrees in conservation education.1 Dockeray became a “nature lecturer” at the Grand Rapids Public Museum after her graduation in 1949 and was later promoted to Curator of Natural History. She created over 100 natural history programs, traveled around teaching in local schools, and led groups of students on field trips to the same land that she had played on as a child herself.2

The land at that time was owned by a man named Victor Blandford. Afraid that the property would be sold and developed, Dockeray and the director of the museum, Frank DuMond, approached Blandford in 1964 about preserving some of the land. Blandford agreed to donate 17 acres to use as a park, overseen by the museum.2 In 1968, a visitor center was opened with funds donated by the museum association and donated labor.3 A state recreation bond and other donations eventually led to the center acquiring a total of 143 acres. Dockeray served as the center’s curator-naturalist until 1990.

The center was overseen by the Grand Rapids Public Museum until 2003, when it passed under the management of the Grand Rapids Public Schools. These were rough years for the center as a lack of funding almost closed it down. Thankfully, in 2009, the Wege Foundation agreed to donate funding to hire an Executive Director for five years to stabilize the center’s finances. The Blandford Nature Center became an independent non-profit with 501(c)(3) status.4

There are several historic buildings that have been added to the nature center to show what life was like for pioneers living in Michigan. The General Store was constructed in 1987 and hosts programs inside a recently expanded classroom space. There is an authentic 1866 log cabin, built by the Robinson family in Wayland, Michigan. It came to Blandford in 1971 after being disassembled and reassembled piece by piece. The homestead barn nearby was also built in the 1800s and donated the center. Another barn was constructed for the US Bicentennial from pieces of several historic barns in the area. For a time, it was used to house farm animals along with a nearby chicken coop. A third barn is houses supplies for Blandford’s Community Supported Agriculture program. A matching farmhouse built in the 1940s is being restored to be used as administration offices. The Star one-room schoolhouse was built in 1853 just a few miles away from the center. The R.B. Stilwill Horseshoer Shop was built in 1889 and contains the original floors, a fully functional forge, and everything that was in it when it was donated in 1970. A carriage barn behind the shop was built between 1890 and 1910 and is used for storage. Next to the shop is the sugarhouse, which is opened in late winter to demonstrate how maple syrup is made.3

Year-round educational and community programs are a vital part of Blandford Nature Center’s operations. Outdoor classes and walking trails foster an appreciation for the natural resources surrounding the center. The programs “strive to help people get their hands dirty and discover their relationship to the natural world.”5 A campaign is underway to renovate and expand the visitor center, which will be renamed in honor of Mary Jane Dockeray, who continues to be actively involved as a frequent volunteer. In 2015, the center welcomed 45,000 visitors.6