Although a precise history of the blues and its origins can never really be pinned down, Dockery Farms is often called the "birthplace of the blues." This is largely due to the influential musicians who lived and worked on the property as tenant farmers. Artists included Charley Patton, Henry Sloan, Howlin’ Wolf, Willie Brown, Tommy Johnson, and Roebuck “Pops” Staples.

Dockery Farms is commonly referred to as the "birthplace of the blues." 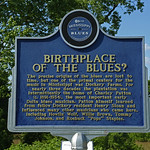 In its heyday, Dockery Farms essentially functioned as its own town. Founded in 1895 by William Alfred Dockery, the property eventually had its own elementary school, churches, post and telegraph offices, its own currency, resident doctor, railroad depot, ferry, Blacksmith shop, cotton gin, cemeteries, picnic grounds for the workers, and a commissary that sold dry goods, furniture, and groceries. At one time the property housed four hundred tenant workers and their families. Will Dockery often held concerts on the commissary porch and all-night picnics, where various blues artists performed. The property is listed on the Mississippi Blues Trail, as the possible "birthplace of the blues."