This one-story, three bedroom and two bathroom Colonial home constructed by Joseph Woodnick in 1926 is a historical landmark in the Orlando area and recognized for the detailed construction as seen on the 9 windows, roof pitch, door placement, porch and pergolas. Perhaps the home is best known for being used as the home to the Buckman’s in Ron Howard’s film “Parenthood.” This home is listed as privately held by the Taylor family and is not open for public display.

A Black and white photo of the Eastin House located at 1327 Eastin Avenue prior to the remodeling and renovation that took place on the early 1970’s. 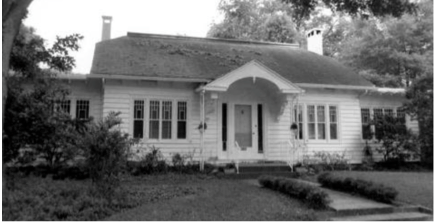 A 2005 photograph highlighting the details and expansive windows in the front of the house.

This Colonial crafted home built by Joseph Woodnick photographed in 2005.

Google Maps was utilized to pin point the location of the historic Eastin House. 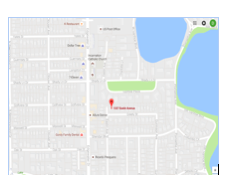 In 2005, Bess Taylor, owner of the Eastin House, submitted to the Municipal Planning Board a zoning map, Agenda Item 5, for historic consideration to be approved as a Historic Site. 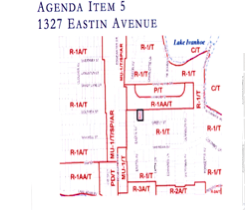 A 1992 survey conducted for the city of Orlando of the Ivanhoe area of College Park, featuring number 3, the Eastin House. 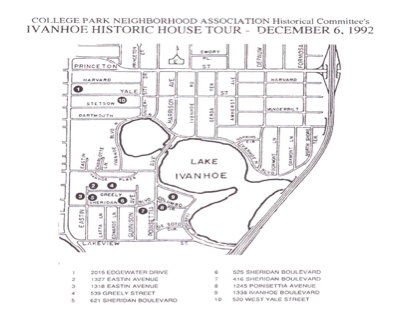 Present owner, Bess Taylor, filed paperwork to have this 1926 Colonial home approved as a historic landmark in Orlando as a means to preserve the home and its role in the development in the area.  The Historic Preservation Board approved the home to be listed as one that made considerable contributions regarding “broad pattern our history and Criterion because it embodies the distinctive characteristics of a type and period, it represents the work of a master and it possesses high artistic values” ("Municipal Planning Board - Agenda Item 5 1327 Eastin Avenue." Edocs City of Orlando. N.p., 15 June 2004. Web. 30 Oct. 2016.) on October 1, 2003. This one story three bedroom, two bathroom home with a two car detached garage features Colonial bungalow style craftsmanship that was very popular in the 1920’s.  The home is also known for its attention to detail as seen in the 9 double hung windows that are wood case style, the sidelights, the downspouts, the pergolas and the carved rafter tails/brackets.  In the 1950’s, some slight changes were made to the home and further improved in 1989 with the additional casement of the added windows.

An owner of a local lumber company who was a highly regarded contractor built the home.  He paid close attention to creating outstanding ornamentation in such a small bungalow.  James and Fannie Fitzgerald purchased the property in 1926 and they hired Joseph Woodnick to build them this $4500 home. Woodnick was well known in Orlando for the fine craftsmanship of the homes he built from 1921 through the 1940’s.  The home was featured in Ron Howard’s 1989 film “Parenthood”.

http://www.cityoforlando.net/city-planning/wp-content/uploads/sites/27/2015/02/Orlando-Local-Landmar... Moore, Ernest C. "Historic Landmarks." The Journal of Higher Education 4.9 (1933): 500. Orlando’s Local Historic Landmarks. 13 Jan. 2015. Web. 26 Oct. 2005. This sight provides details on this 1926 the Colonial crafted house that was featured in the move “Parenthood” directed by Ron Howard. The one story home is known for the number of windows that provides a distinctive appearance and allure to the home. John Woodnick’s built the home and was knows in the Orlando area for building outstanding quality homes from 1921-1940. This website detailed the features of the architectural historic home. This is a helpful source for getting an overview of Eastin House. http://oldetownbrokers.com/blog/celebrate-american-heritage-with-colonial-homes/ Http://oldetownbrokers.com/blog/author/otblog/. "Celebrate American Heritage with Colonial Homes." Olde Town Brokers Blog Orlando FL Real Estate. N.p., 07 July 2015. Web. 27 Oct. 2016. This site is designed for those that are interested in Colonial designed architecture and goes into great detail to depict the characteristics of a Colonial style home. The article includes information on where to find Colonial style homes, their unique features, shape, and roof pitch and door placement. Those Orlando residents interested in this style home are provide neighborhood names for touring/viewing the homes as well as Local Landmarks that includes the Eastin House which features a number of incorporated architectural styles. This site will provide designers and architectures information on historic Colonial style homes in the Orlando area. College Park Neighborhood Association Historical Committee's. "Ivanhoe Historic House Tour - December 6, 1992." IVANHOE HISTORIC HOUSE TOUR - DECEMBER 6, 1992 (n.d.): n. pag. My College Park Neighborhood Association. 6 Dec. 1992. Web. 30 Oct. 2016. Researchers seeking information on permitting, construction and use of the home will find what they are looking form at the College Park Neighborhood Association Historical Committee site. The home located at 1327 Eastin Avenue received a permit in 1926 b Joseph E. Woodnick to build a bungalow style home for $4500. The house is comprised of intriguing details such as the porch, the design over the front entrance way, multiple wood paned windows, the custom made wood fence and the large yard. The home was inhabited by The Dibble’s for over 15 years and then was acquired by the Taylor’s who restore many of the homes original designs in 1969. The house design of the 1920’s was a popular style and was selected by Ron Howard to be the home used in the movie “Parenthood”. "Municipal Planning Board - Agenda Item 5 1327 Eastin Avenue." Edocs City of Orlando. N.p., 15 June 2004. Web. 30 Oct. 2016. Planning and zoning enthusiasts and architects will find this City of Orlando historical request site interesting regarding the process the Taylor’s experienced obtaining approval for the Colonial home to be registered as a historic site. The home, built in 1926, met criteria such as certain characteristics reflective of the time period that is was constructed. The site continues to set the criteria for which homes need to pass in order to be selected as historic. The Eastin home was acknowledge for the detailed craftsman style word on the wood, 9 windows with wood casements that were both fixed and double hung, sidelights and as well as the pergolas. The document provided in depth information about the builder John Woodnick. http://articles.orlandosentinel.com/1989-08-04/lifestyle/8908032186_1_helen-house-frank-house-filmin... Hinman, Catherine. "The Scene-spotter's Guide To 'Parenthood' Locations." Tribunedigital-orlandosentinel. Orlando Sentinel, 04 Aug. 1989. Web. 30 Oct. 2016. This site appeals to those interested in filming locations used in the entertainment industry. The historic home located on Eastin Avenue in Orlando was selected by Ron Howard and was presented as a home in St. Louis for the film “Parenthood”. The article spends a significant amount of time dedicated to the movie, opening scenes, and characters rather than the historic value of the home. Researchers seeking information on the history, architecture and approval process for being selected as a historic home would have to look at other articles and sites.