Named UFO in resemblance to the USO (United Servicemen’s Organization) a block away, the UFO was a GI Coffeehouse that operated during 1967-1968. The UFO was the very first of the long chain of GI coffeehouses that popped up during the Vietnam War. In the beginning, it was a place for GI’s to spend their free time leisurely but later developed into protests and other methods to further the anti-war movement. It was the first of several GI coffeehouses that contributed to the soldier anti-war effort during the Vietnam War. It was a center where GI's who disagreed with the war could openly voice their opinions. A number of GI newspapers also debuted through these coffeehouses.

A still of a newspaper mentioning the activities that happened because of the GI Coffeehouse in Columbia, SC. 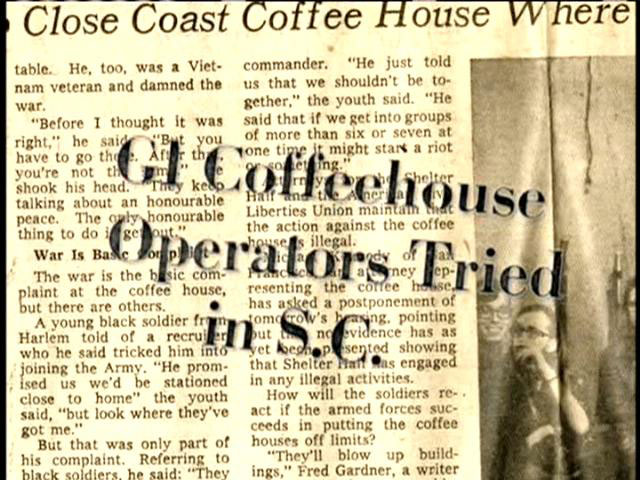 Another still of a newspaper mentioning the activities that happened because of the GI Coffeehouse in Columbia, SC. 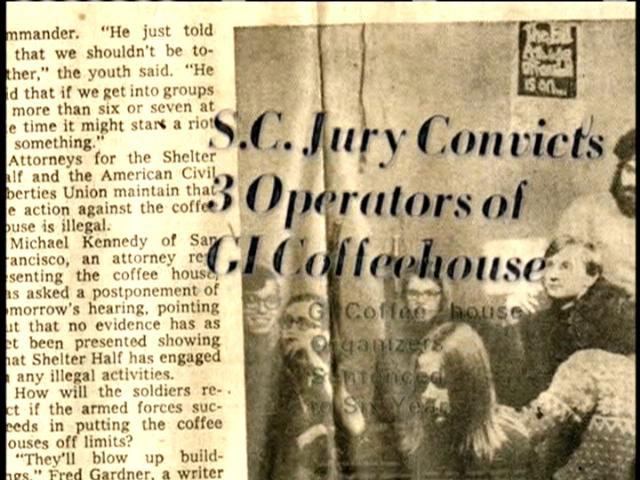 The counter-culture movement during the Vietnam War was a time of social revolution. Although it is generalized that everyone protesting the war were together in their voice against it, in actuality this movement was comprised of many different groups fighting for their own reasons and causes. One group of the many, was a number of soldiers who did not agree with the Vietnam war.

In the late 1960s/early 1970s, a chain of GI coffeehouses were opened up near various military bases. The first of these GI coffeehouses began in Columbia, SC and branched out to other locations later that year. The coffeehouses were places where GI's were able to enjoy themselves by drinking coffee, conversing with others, and were offered the opportunity to read anti-war newspapers if they chose to. Many of the GI coffeehouses were met by hostility from the pro-war community. Despite these occurrences however, they were still able to protest and express their opinions on the Vietnam War. By having these areas where they could meet and discuss issues together, the soldiers were able to band together and orchestrate ideas to aid their goal to end the war.

In 1967, the UFO was founded by Fred Gardner in Columbia, South Carolina outside of Fort Jackson.  Serving one tour, Gardener understood the hardships that soldiers experienced. Therefore, Gardener wanted to create an environment where soldiers could go to relax and get away for a while. He invested 10,000 dollars into a building in order to create his vision for his fellow soldiers. He and his partners found the perfect spot to create his vision. It was near Fort Jackson and a block away from the USO (United Servicemen’s Organization).

Gardener and his partners worked to get the building up to par and worked to make it interesting for GIs. They hung posters of Bogart, Monroe, Cassius Clay (Mohamed Ali), Bob Dylan, a cannabis plant, and Lyndon Johnson holding up a hound dog by the ears. They spread the word about their coffee house by going to the South Carolina State Fair to attract white people and the Palmetto State Fair for African Americans and handing out baked goods. The UFO was a desegregated place, not only based on race, but a place where students and GIs could also interact freely. The GIs would play music and paint new pictures on the walls. Musical acts were also booked in order to entertain the people.

This coffeehouse later became a popular hit with GIs who were not interested or did not support the Vietnam War. It became a place where they could freely voice their opinions on the war without consequence. This led to the GIs forming a group and a plan to be able to exercise their right of free speech. They decided to perform an act of protest on February 13th by praying for peace in front of the chapel across from post headquarters, while dressed in their uniforms. The plan was to test the waters to be able to freely express themselves. The results would determine one of two things. If they were not reprimanded for these actions it would prove that they would be able to protest peacefully without consequence and could orchestrate even more protests. However, if they were arrested they would be able to illustrate to the America public their treatment.

The protest of thirty GIs was met with Army opposition. When arriving to the chapel, the GIs were told that the plan was canceled. Despite what they were told two soldiers were determined to express their points of view and dropped to their knees to pray regardless of the news. Bob Tartar and Steve Kline were arrested for disturbing the peace but the charges were later dropped. Others in the crowd of GIs began shouting "Why should we fight for that fascist General Ky?" and "We want to have a free meeting!" These people were also taken away but were never charged with anything. This protest marked the first movement of opposition to the War by military personnel. It would later develop further and grow into a larger GI anti-war movement. For more information on GI coffeehouses see “Oleo Strut”.