The Old Opera House opened in 1911 and closed in 1948. Thanks to preservationists and local residents, the theater once again offers a space for live performances. 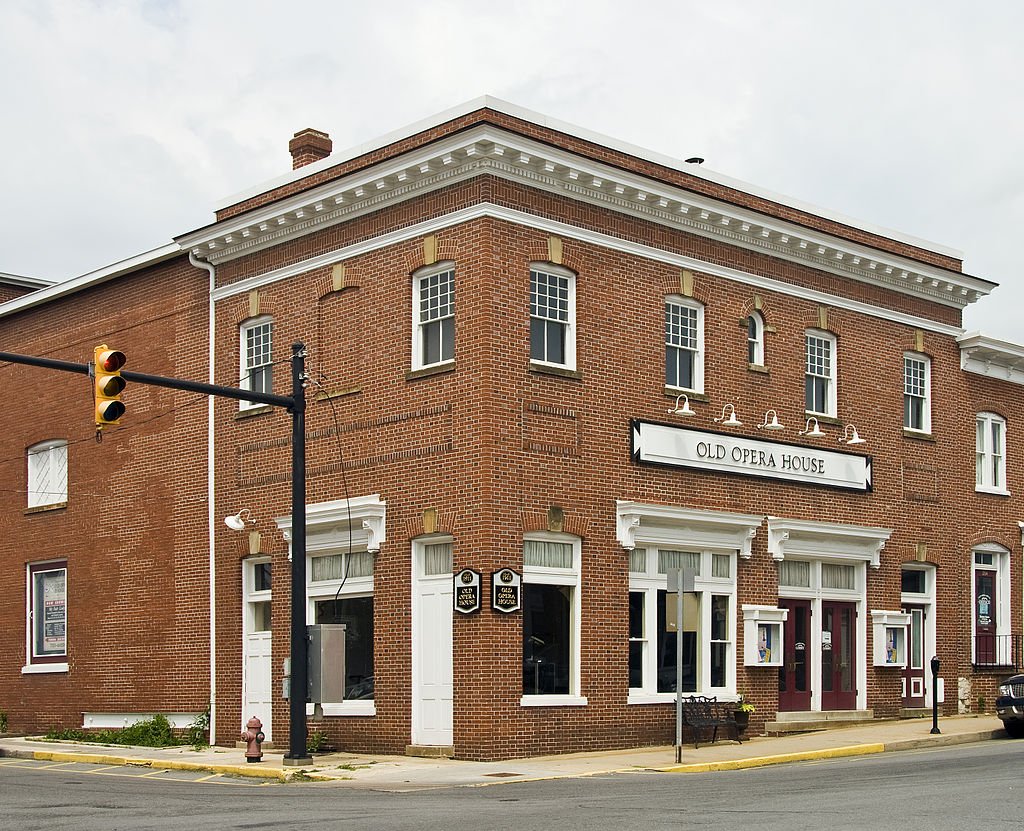 In the early 1900s Annie G. Packette, a noted local and descendant of the Washington family, sought to increase the role of the performing arts in the Charles Town community. In 1910 she spearheaded an effort to raise $50,000 for building an opera house on North George Street. Washington D. C. architect Thomas A. Mullett was commissioned to design the structure. The New Opera House, as it was originally called, was given a simple design, with seating for at least 500, an orchestra pit, and a curved balcony. The house had its grand opening on February 14, 1911 with a performance of the comedy play Bachelor Girls’ Federation of Clubs, featuring local actors. Proceeds from the show went to the local United Daughters of the Confederacy branch to care for Confederate veterans.

The New Opera House originally hosted theatrical performances but also included vaudeville, minstrels, readings, circuses, and even basketball games and boxing matches. Occasionally it held church services and election returns, and at one point it stored supplies for disaster relief. The first films began to be screened in 1915. By the 1930s, with the introduction of the “talkies,” the opera house was serving primarily as a movie theater. Business declined as movies overtook live entertainment, and in 1948 the opera house closed. The building was converted into commercial space and for the next few decades it served variously as a florist shop, antique store, apartments, and a bowling alley. Gradually it began deteriorating and accumulating waste, including a large amount of pigeon droppings in the auditorium.

In 1971 a group of local citizens, including Dixie Kilham, owner of the Hilltop House hotel in Harpers Ferry, arranged to clean out the inside of the building. In 1973 the Old Opera House Theatre Company was formed with the intention of acquiring, restoring, and reopening the theater for performances. The Todd family, which owned both the theater and an adjacent building constructed in the 1890s, agreed to donate both structures to the group. The next several years were spent fundraising and doing restoration work. The theater ceiling was re-plastered, a new floor and new seats were installed. The second building meanwhile was converted into space for a theater workshop, offices, and a rehearsal area. In 1978 the New Opera House, renamed the Old Opera House, was added to the National Register of Historic Places.

The opera house reopened to the public in October 1976 with a production of My Fair Lady. Today the theatre company hosts six plays, a one-act play festival, a ballet, and a summer youth theatre camp at the opera house. In 2008 the Old Opera House Arts Centre was established to offer lessons in acting, dance, and voice to people of all ages. The lower level of the building is now also home to the Jean Heiler Gallery, showcasing the work of local artists. The opera house also operates a thrift store on North Charles Street as a fundraising initiative.