Home to the Arizona Theatre Company (ATC), the historic Temple of Music & Art is a cultural arts venue built in 1927. Constructed in an elegant, Southwestern style, the Temple exudes grace and class with its beautiful surroundings of cobbled stone, fountain–splashed patio, and quiet tree-lined street. The spacious Alice Holsclaw Theatre with its 623 seats is a marvelous place to see either Shakespeare or concerts. If a smaller, more intimate setting is desired for a performance, the more intimate Cabaret Theatre is available upstairs. In Concert! Tucson also hosts performances of Contemporary, Folk, and World Music at The Temple of Music & Art. 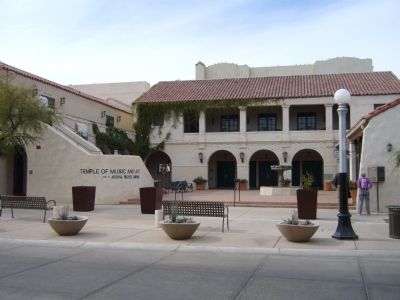 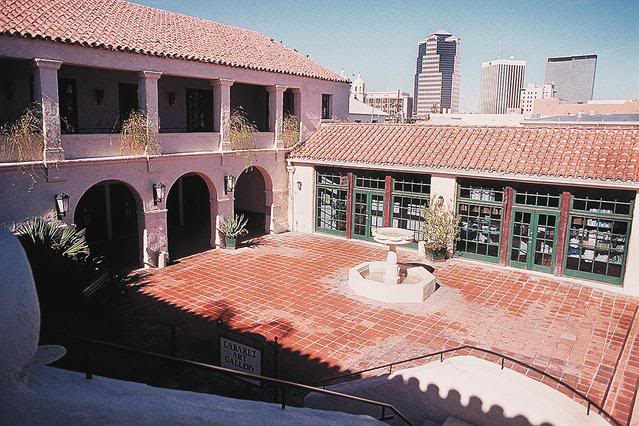 Home to the Arizona Theatre Company (ATC), the Spanish Colonial Revival-style Temple of Music and Art was built in 1927 by the Saturday Morning Musical Club as a performance arts space. In 1963, it was renamed Tucson Music Center.

In 1970 in became El Cine, screening Spanish language movies, and this continued until 1972 when it became the Cine Azteca. It remained the Cine Azteca until 1976, when it was returned to its original use and the original name was revived.

In 1982, a property developer purchased the building and demolition was planned, but In 1984, the newly formed Tucson Artists Coalition successfully demonstrated and succeeded in saving the building, and it was purchased by the City. Between 1984 and 1990, extensive renovations were carried out, and in 1990, it reopened as the Temple of Music and Art with a performance of “Amadeus” by the Arizona Theatre Company. (6)

Over four decades ago, quality professional theatre for the people of Arizona was just a dream. Today, ATC is recognized as one of the most dynamic theatres in the country. Founded in Tucson by Sandy Rosenthal in 1967 as the Arizona Civic Theatre, ATC achieved professional status in 1972, when it began hiring Actors’ Equity performers on a modified League of Resident Theaters (LORT) contract. The Arizona Civic Theatre began presenting a portion of its season in Phoenix in 1978, and a year later the name was changed to the Arizona Theatre Company.

As the professional resident theatre of Arizona, ATC has been performing full seasons in both Phoenix and Tucson to a combined audience of more than 150,000 since 1983. ATC has been cited as a national model for professional performing arts institutions in consideration of how it has managed and produced full performance seasons in two cities and how it has built audience support and established fiscal stability in both communities.

In over four decades, ATC has produced more than 200 plays, from the classics of Shakespeare, Shaw, and Moliere to the works of contemporary writers such as Shepard, Stoppard, and Fugard. ATC has also committed itself to the development and presentation of new works, both on the main-stage and through special programs. This wide-ranging repertoire presents an exciting challenge to all departments at ATC – a challenge that is consistently met through the high standards that have come to be expected of the company.

ATC is actively involved in numerous educational and outreach programs in its various communities in an effort to increase public awareness of ATC and cultivate current and future audience interest and support. ATC performs in Tucson’s historic Temple of Music and Art and at the state-of-the-art Herberger Theater Center in Phoenix. (2)