Now home to the Hemphill County Library, this historic building was constructed by methe local chapter of the Women’s Christian Temperance Union in 1906. The building is historically significant as the only structure in the nation that was built, owned, and operated by a local chapter of the Women’s Christian Temperance Union beyond the second half of the 20th century. The members of Canadian's local chapter built the structure using their own donations and funds raised from annual bazaars. The building is now used by a number of civic groups and is home to the public library for Hemphill County. The Canadian, Texas chapter of the WCTU was established in 1902 determined to abolish liquor by local option election. Hemphill County went “dry” a year later, and the women continued to meet weekly in this building until the 1970s. 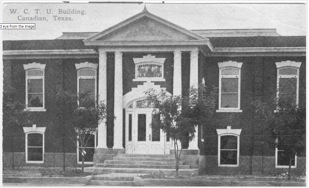 The WCTU building was constructed in 1906 and is now home to the county library. 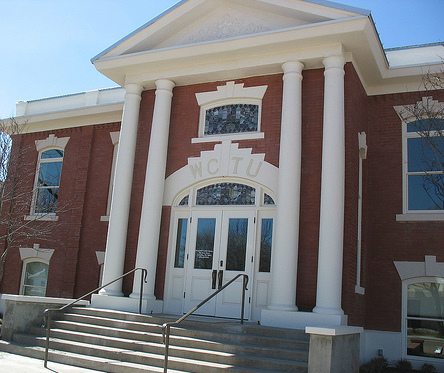 By 1900, the town of Canadian, the Hemphill County seat, was a major shipping center with railroad division headquarters and roundhouses, cotton gins, elevators, churches, banks, public schools, various stores, and other small businesses.  Canadian also had at least 13 saloons and was a “wet” community since its founding in 1887.1

Through the efforts of Mrs. Elizabeth Johnson and Mrs. L.N White, the Women’s Christian Temperance Union (WCTU) was organized on November 26, 1902 by Mrs. Nanny Webb Curtis who was organizing chapters throughout the state of Texas.  The ladies felt a union was necessary to fight against the saloons that existed in Canadian during that time.  Their first meeting attracted about twenty members.  Mrs. Johnson was the chapter’s first President. She was a woman of great talents and vision, and together with her devout spiritual convictions, she directed the activities of the WCTU chapter for 39 years.  They held their weekly meetings on Wednesday afternoons with their ultimate goal being the implementation of a local option election that would determine whether Hemphill County would be “wet” or “dry”.  On December 30, 1903, they were victorious in abolishing the sale of whiskey with a vote of 64 in favor of it and 34 against it.2

Their chapter of the WCTU continued to grow and in 1905 they began to dream of obtaining their own building for the purpose of their meetings and other union activities.  They solicited money from the community and were about to purchase a lot for $400.  In 1906 they held their first bazaar and turkey dinner to raise money to erect a building.  In 1911, they had raised the necessary funds to begin the construction process and their building became a reality.  Just six years later, on December 26, 1917, a mortgage burning celebration was held because the debt for the building had been completely paid off.3

Canadian’s local chapter of the WCTU officially stopped meeting in 1972 and donated the building to Hemphill County.  The national chapter continued to operate until the 1980s.  The building now currently houses the Hemphill County Public Library.  The annual bazaar that was initially began to fund the building is still held in Canadian every year and the library benefits from its proceeds.4