The lodges make up nine buildings across from the Robins Center used by the University of Richmond's fraternities for social events. The original lodges were built in 1954 and by 1960 there were a total of ten lodges used by fraternities. Through the years alterations have been made on the physical buildings but the rules enforced at the lodges have shifted with the decades. From their inception till today, the lodges represent a social hub at the University of Richmond. 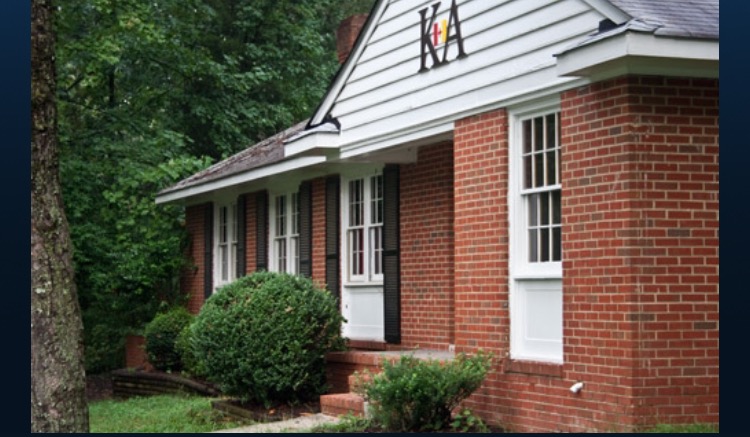 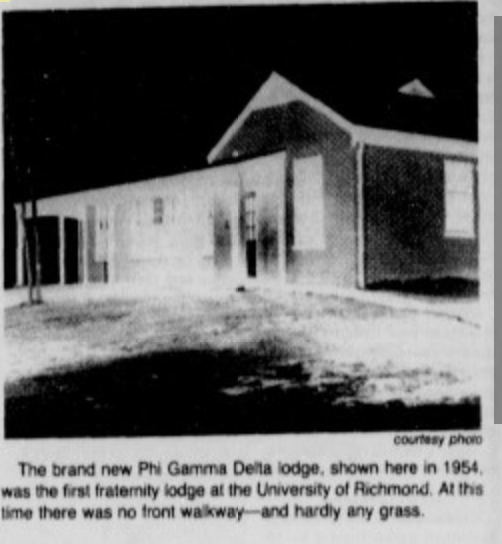 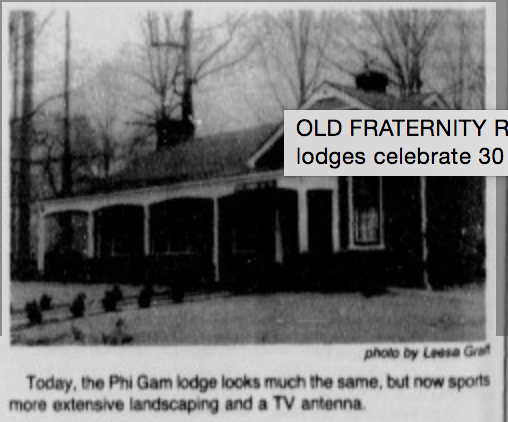 A current image of the FIJI lodge 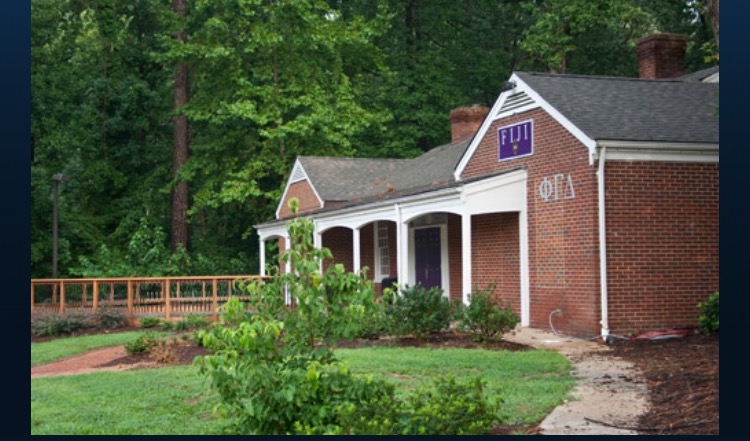 A current image of the Theta Chi Lodge 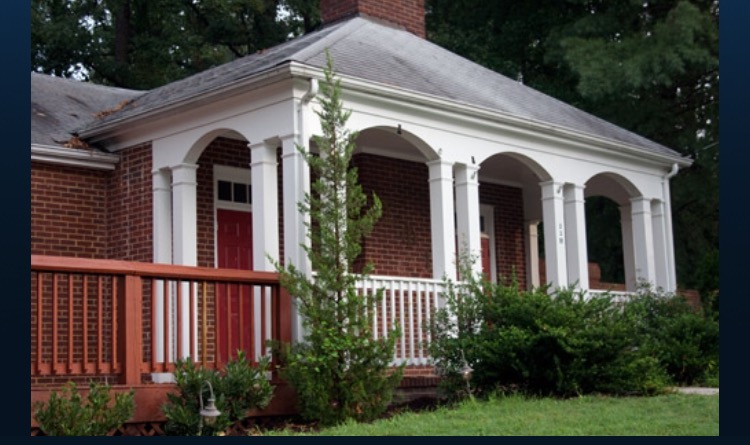 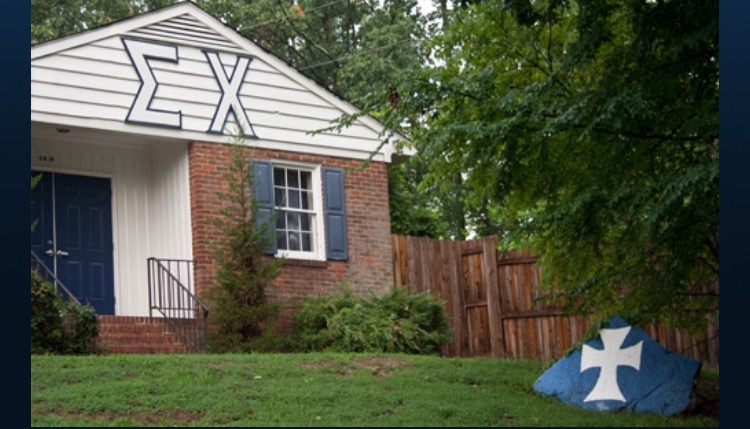 The lodges were never intended for residential use; they only served as a social gathering place. The lodges were and remain inconsistent with the traditional architecture of the school. Originally the lodges’ suburban architecture was due to limited funding but the need to make them uniform to campus has never been a concern. The goal of the Interfraternity Council was to construct three lodges on the northern end of campus but the road to access the lodges did not yet exist. The responsibility of constructing the road, sewage and water lines was assumed by the University.  The funding for the lodges came partially as loans from the University, capped at $7,500, in addition to the land given to the fraternities for free.2 In May 1952, after two years of fundraising, Phi Delta Theta, Phi Gamma Delta and Sigma Phi Epsilon broke ground on what is now called “old frat row”.3 Other social fraternities were inclined to construct their own lodges and by the end of 1956 there were five lodges on the row.4 The progression continued in 1958 when five new lodges began construction on what is now called “new frat row”.5

By the 1960s the fraternities and the University were determining the policies and purposes for these new social enclaves. In that decade fraternities had to pre-register the parties in the lodges and chaperones were required if women were expected.7 This requirement continued and still exists to some degree, but what the authorities expected and accepted changed over the years. In the 1960s the fraternities pushed back on this policy and demanded that the University instill more trust in them. The physical division between the Richmond and Westhampton campuses made the lodges a primary location of coed interaction. The question of when and under what circumstances women were allowed to lodges was a major concern of the 1960s.

Issues involving alcohol appeared in the late 1960s and continue to persist as a problem into the decades that follow. Even when low-percentage beer was legal, the University remained strict in the sixties on its policies but fraternities were not compliant. In the fall of 1966 SAE was expelled from campus with six other frats penalized due to out of control drinking. In response to these actions the Interfraternity Council created an elaborate court system to hold fraternities  accountable for staying sober at the lodges.8 Fraternity leadership complained that these alcohol policies were outdated but recognized that they had to comply with the University policy because of the financial support received in the construction of the lodges.9 In 1968 the fraternities submitted a request to either build new residential houses or add on to the to lodges for housing. Considering the financial state of the University of Richmond at this time, this proposal was rejected due to lack of funds.10

In the 1970s the use of lodges and the social scene around Greek life grew rapidly. The University received a donation of $50 million from E. Claiborne Robins, forever changing the trajectory of the school. This donation, along with merging of Richmond and Westhampton colleges, influenced the social dynamics of campus.  The era of the seventies marked a time of sexual liberation and increased acceptance of drug use. In response to cultural shifts, the University changed the policy for alcohol to allow drinking on specific areas, one of which being the lodges.11 The first publicized appearance of drugs within the fraternity cultural arose in the late 1970s when students were caught with LSD and cocaine.12 Instances like these became a regular occurrence in the decades to follow, as they were on campuses across the country

The increase in funds and the integration of gender helped established what is now considered the “college experience”. This quintessential college experience had a heavy emphasis on the social life of the college student. The weekend became a coordinated string of social events predominantly surrounding Greek life and lodges. The hype surrounding  these events encouraged, then and now, social conformity, though that conformity has become less pronounced due increased student diversity. The routine and expectation of weekend social events surrounding fraternities (and specifically lodges) remain a cornerstone of students’ social lives of the University of Richmond.

The lodges consistently continued their roles as the predominant location for alcohol consumption  and coed social interaction on the University grounds but the nature of those activities changed with the eras. It was in the 1980s when the culture and attitudes associated with fraternities began to become clear. These traits include hyper masculinity, entitlement, and competition.  The 1980s mark the campus’s first acknowledgement on the issue of rape,  a reaction in part  to the more of sexually liberal culture of the seventies. The sexual assault on campus was frequently tied to the events held by fraternities. In 1988, a Collegian article stated that women who were concerned about sexual assault should simply not attend the lodges.13 In another article, the author claimed that lodges provided a space to allow “men to be men”.14 In the eighties the lodges were the primary location for coed social interaction because housing was staunchly segregated by gender and had restricted visiting hours. When the question of coed housing arose one fraternity member stated: “The girls come to our lodges on weekends —why should we have to deal with them during the week?”.15  In a celebration held for the 30th anniversary of lodges in 1984 many Greek life members stated the system of lodges and fraternities have remained the same over the years.16

The purpose of lodges and culture of fraternities stayed consistent through the1990s, but there were various structural changes to the lodges. Many of the lodges were either renovated or demolished on old frat row. In 1996 renovations were required  for many of lodges to meet fire safety standards.17 In the late nineties three houses on old frat row were demolished and two new ones were built in the following years.18 In the absence of lodges, more fraternities started having parties off campus or at the apartments.  In the nineties more of the student body participated in Greek life social events, making it more competitive to get into to lodges.  Despite larger student body participation fraternity membership decreased over the nineties from 55% to 45%.19 This trend continued into the 2000s and today with only about a third of the male undergraduates in Greek life.

Today, the lodges are arguably the least glamorous and most dilapidated buildings on the University of Richmond campus. Despite their lackluster appearance and peripheral location, they embody a large part of the student body’s social experience. From the 1950s to today, the social preoccupation has been fixated toward Greek life and the lodges.