Margaret “Margo” Jones, a native of Livingston, Texas, was one of the leading figures of American theater. She played a key role in the careers of many actors and playwrights including Tennessee Williams and William Inge. She directed two well-known productions, The Glass Menagerie and Inherit the Wind, on Broadway. She was an advocate for non-profit professional theaters and theater-in-the-round, and she carried out these ideas both on Broadway and in her own theater in Dallas. She died in Dallas in 1955 but her influence on the theater continues to exist today. 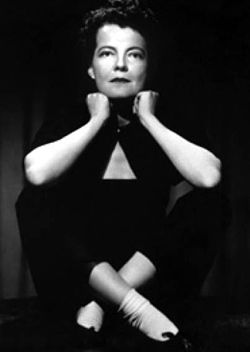 Margo Jones working in her apartment 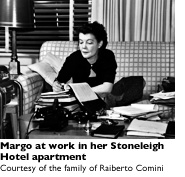 Margaret (Margo) Virginia Jones was born on December 12, 1911, in Livingston, Texas.  She was the second child and only daughter of Richard and Martha Jones.  She graduated from Livingston High School at the age of fifteen and began school at the Girls’ Industrial College of Texas in Denton, known today as Texas Woman’s University.  She earned a Bachelor’s Degree in Speech in 1932 and a Master’s Degree of Psychology and Education in 1933. After earning her degrees, she worked and studied theater at the Southwestern School of the Theater in Dallas.1

In 1935, Margo began traveling around the world seeing theater in Japan, China, India, Africa, England, and France.  Margo returned to Texas and founded the Houston Community Players in 1936 and directed in that theater until 1942.  She earned national attention for her work and in 1939 was named by Stage magazine as one of twelve outstanding theater directors outside of New York.  She was the only woman selected.2

Margo met playwright Tennessee Williams in 1942 and it would change the course of her career.  She directed his play You Touched Me at playhouses in both Pasadena and Cleveland that would bring Williams to the attention of national theater critics.  During her work with Williams, she had been developing an idea that would change the face of American theater.  She wanted to establish a network of non-profit, professional theaters outside of New York City that would present plays that were up and coming, as well as the classics.  In 1944, she proposed the idea to a Dallas theater critic and he encouraged her to apply for a Rockefeller fellowship.  She began the fellowship in 1944, but interrupted her work to co-direct Williams’ play The Glass Menagerie. With the money and success she acquired from this job, she was able to open her first prototype theater in Dallas.3

The Dallas Civic Theater opened its doors in 1947.  The theater was the first professional arena theater (theater-in-the-round) in the country and was the first non-profit, professional theater.  The first season of the theater included William Inge’s The Dark at the Top of the Stairs and Tennessee Williams’ Summer and Smoke.  Later seasons included the works of Shakespeare, Chekhov, and Dorothy Parker.  Margo took two plays from her theater in Dallas and produced them on Broadway as well.  In 1955, after it had been turned down by Broadway producers as “too controversial”, Inherit the Wind was produced in the Dallas Civic Theater and after its immense success, made its way to Broadway.4

Margo died in Dallas in 1955 at the age of 44.  She had been accidentally poisoned by carbon tetrachloride that had been used to clean her apartment’s carpet.  Today, strong regional theater companies continue to thrive throughout America, which was Margo’s dream of a decentralized theater.  Her burial site in Forest Hills Cemetery in Livingston, Texas has a historical marker dedicated by the Texas Historical Commission honoring her work in the world of theater.5