In the middle of the afternoon of May 3, 1887, Sonora, Mexico and Cochise County (AZ), United States were hit with a large earthquake. While Sonora was hit the hardest, with many buildings crumbling and many deaths, cities and towns all throughout Cochise County (Douglass, Bisbee, Sierra Vista and Tombstone to name a few) were slightly damaged and rang with many aftershocks. This 7.6 earthquake kills about 40-50 people and is so far the only earthquake to affect Arizona with any type of considerable damage.

1887 sketch by Dr. George Goodfellow of the 1887 Sonora earthquake fault zone based on several weeks of field study. The U.S./Arizona border is shown at top. 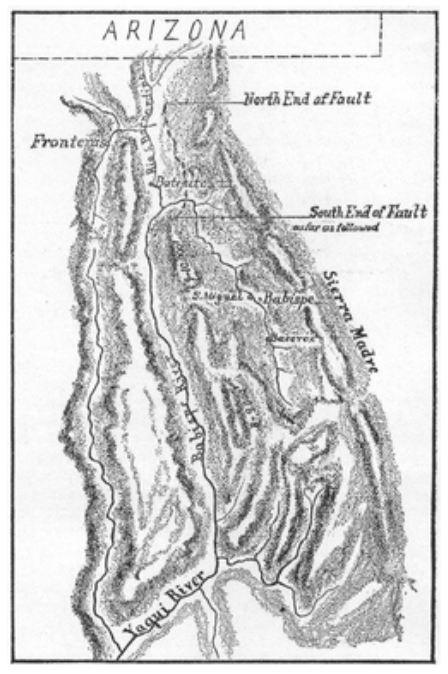 1887 photo show the displacement of ground along fault lines. Displacement was as high as 16 feet. Courtesy of the Arizona Geological Survey 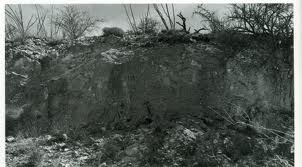 Map of the Mexico/Arizona border. Dot is the epicenter of the earthquake. 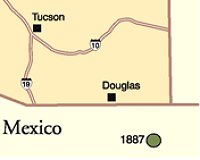 An adobe home destroyed by the 1887 earthquake just south of Douglas in Sonora, Mexico. Specifically, this was in the small Mexican town of Bavispe. Photo from AZ Historical Society.

This geological map depicts, by color, which areas were hardest hit by the 1887 earthquake. Courtesy of the Arizona Geological Survey. 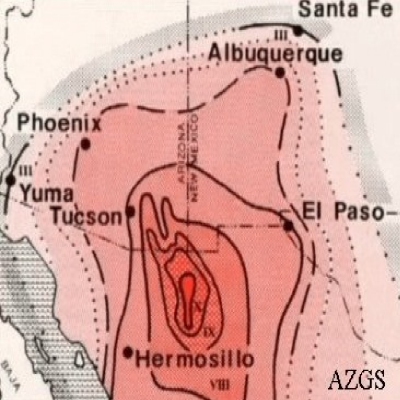 The earthquake was located near the southern end of the extensional Basin and Range Province. The western margin of the Sierra Madre Occidental plateau is formed by a series of west-dipping normal faults, over a distance of at least 190 miles. The earthquake occurred within this zone. Towns near the epicenter suffered significant damage, particularly in Bavispe, where most houses were destroyed and 42 of the town's 700 inhabitants were killed. Houses of adobe construction were also destroyed in Tepic and Moctezuma. The houses were roofed with heavy log rafters that were untied to the adobe walls and fell in when the walls collapsed. The earthquake triggered many rockfalls and landslides and caused ground fissures. Moderate to severe damage occurred in northeastern Sonora, northwestern Chihuahua, southwestern New Mexico, southeastern Arizona and the westernmost part of Texas.

The earthquake was associated with a surface rupture consisting of three segments with a combined length of 63.4 miles, the longest normal fault rupture recorded for an earthquake in historic times. The three faults that ruptured were the Pitáycachi, Teras, and Otates faults from north to south. The magnitude of the event has been estimated as 7.6 on the moment magnitude scale from an analysis of an isoseismal map drawn up for this event, following a re-evaluation of earlier estimates of felt intensity.

There was a prolonged sequence of aftershocks that are interpreted to continue to the present. Particularly large aftershocks (about magnitude 5) occurred on 26 May 1907, 17 May 1913 and 18 and 19 December 1923.

The earthquake destroyed most of the adobe houses in Bavispe and killing 42 of the town's 700 residents, Dr. George E. Goodfellow in Tombstone, Arizona Territory, loaded his wagon with medical supplies and rode 87 miles to aid survivors. The townspeople named him El Doctor Santo (The Sainted Doctor), and in recognition of his humanitarian contributions, Mexican President Porfirio Diaz presented him with a silver medal that had belonged to Emperor Maximilian and a horse named El Rosillo. Goodfellow noted that it was very difficult to pin down the time of the earthquake due to the absence of time pieces or a nearby railroad, and the primitive living standards of the area's residents.

Goodfellow returned twice, the second time in July with Tombstone photographer Camillus Sidney Fly to study and record the effects of the earthquake. He covered over 700 miles on horseback but mostly on foot through the Sierra Madre Oriental mountains recording his observations. His report included the first surface rupture map of an earthquake in North America and photographs of the rupture scarp by C.S. Fly. The United States Geological Service praised his "remarkable and creditable" report, describing it as "systematic, conscientious, and thorough." The earthquake was at the time the “longest recorded normal-fault surface rupture in historic time.” His report was later described as an “outstanding study” and a “pioneering achievement”

Suárez, G.; Hough S.E. (4 November 2008). "Reevaluation of the Macroseismic Effects of the 1887 Sonora, Mexico Earthquake and its Magnitude Estimation" (PDF).