The Norfolk Confederate Monument on E. Main Street commemorates the final reunion of surviving Confederate soldiers. Unveiled in 1907, it features a 15-foot-tall bronze sculpture of Confederate soldier "Johnny Reb." The monument is the work of Norfolk native William Couper. Recognizing that those who worked to create the monument were not simply honoring veterans, but also sending a signal about their views on the antebellum South, slavery, and Reconstruction, many residents believe that the monument should be moved to a museum where its history might be interpreted through neighboring exhibits about the Civil War and Reconstruction in Virginia. Defenders of the monument counter that moving the monument would be tantamount to erasing history. Those who supported efforts to move the monument to a place where its history might be interpreted were quick to point out that the monument was moved from its original location in 1971.

Confederate Monument, Norfolk, VA. (ca. 1910 to 1920) Image courtesy of the Detroit Publishing Company Photograph Collection via the Library of Congress. 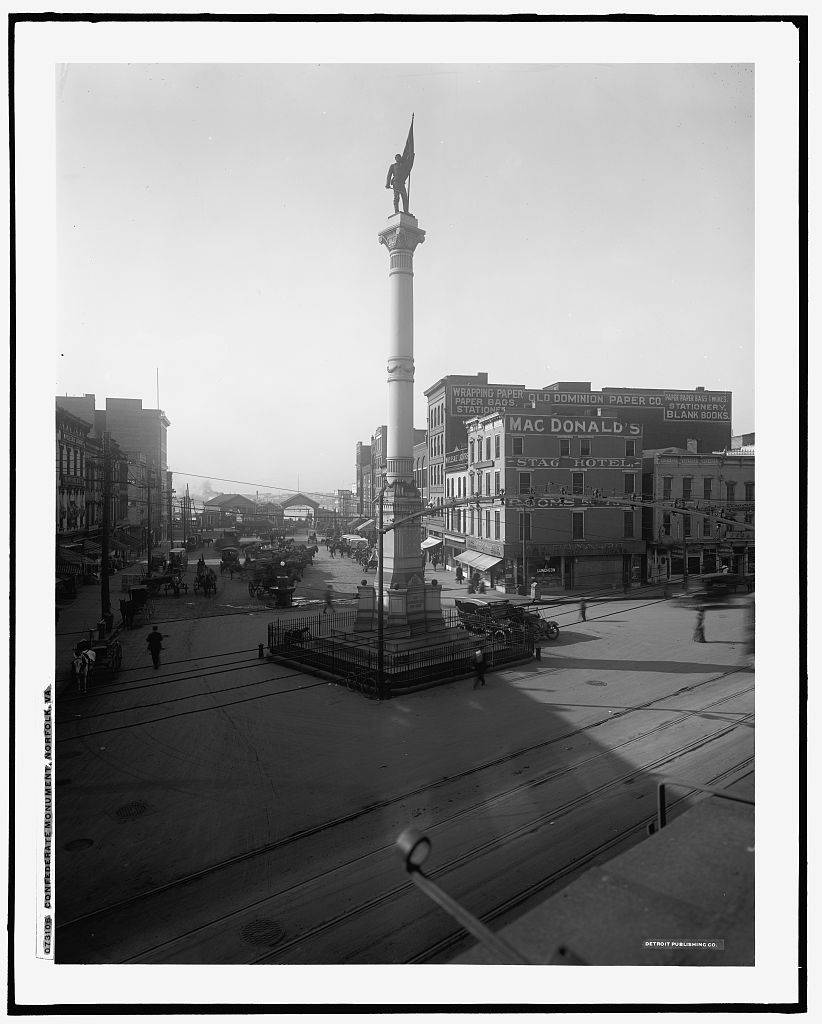 The Norfolk Confederate Monument is a towering columnn located in the center of Main Street, in the downtown area. The monument was created by Norfolk-born artist, William Couper. It commemorates the final meeting of surviving Confederate soldiers and honors the Norfolk-area Confederate forces who served in the American Civil War. The structure features a 15-foot bronze sculpture of a Confederate soldier atop a 50-foot pedestal.

In 1964/1965, the construction of the Bank of America Center resulted in the statue's dismantlement out of concern that it would be damaged by pile drivers. Following a cleaning, it was relocated to its present location in 1971.

In 2015, following a campaign by a local civil rights group to remove the monument, the City Council announced their intention to keep the monument in place. The city ignored the work of historians who demonstrated the need for more interpretation of monuments that were constructed in an effort to erase the history of Reconstruction and the South's defeat. Perhaps ironically, several city council members expressed the view that removing the monument would be an attempt to erase history. Vice Mayor Angelia William Graves explained her defense of the monument in similar terms. "You can't erase history just because you don't like it," Graves said. "It is what it is. To remove it would be a mistake.1

North face:
The north face of the base features a carved Confederate Eastern Theatre battle flag, stylized CSA logo, and the text "Our Confederate Dead."2

South face:
On the south face is a circular bronze plaque with a mounted cavalryman in relief, bearing the words: