Though the historical marker appears to have been removed, this area was the site of a satellite WWII prisoner of war camp, in which German prisoners from North African and Europe were held. It was a sub camp for the larger Camp Blanche down in Hanrahan. Port Allen was roughly rectangle in shape, with Louisiana Ave and Michigan Avenue forming its north-south borders, and 8th and 6th streets forming its west-east borders. The camp was in operation between 1943-1946 and there were between 500-774 prisoners held here. They slept in tents with wooden floors but there were separate buildings for showering and eating. Also, since there was a shortage of workers due to the war, the prisoners had to work in various sugar cane plantations. They were paid 80 cents per day for 8-10 hours.

The former water fountain and marker 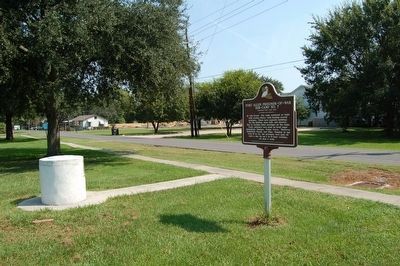 There used to be a water fountain along with the historical marker (next to the electrical pole) but these seem to have been removed sometime in 2016. According to the Historical Marker Database, they were there at least until September 2015.