Situated just south of the Pentagon Barracks, this marker indicates the location of President Zachary Taylor's home in Baton Rouge. Known as "Old Rough and Ready" for his disheveled appearance and temperament, Taylor served as president for a short period from March 1849-July 1850, when he died suddenly of a stomach illness. He served for forty years in the Army, serving in the American frontier, commanded U.S. forces against Native Americans and during the Mexican-American War (1846-1848). His skill as a commander and victories during the war, notably at Monterrey and Buena Vista, earned him wide respect in the country.

The marker is located next to the road on the west side. 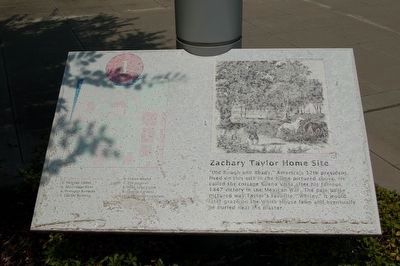 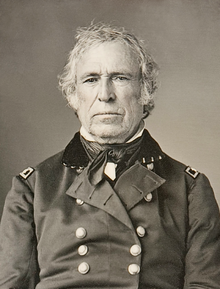 He was urged to run for president, a notion that thought ridiculous. Nonetheless, he was nominated and narrowly elected (despite not doing any campaigning). Though he served in the army, he did own a plantation in Mississippi and 100 slaves. Around this time, new states were joining the Union and there was a fierce debate in the country whether slavery would be allowed to expand in these new areas. Despite owning slaves himself, Taylor was a strong nationalist and did not defend slavery nor secession, an idea that began to emerge during this time. Taylor made it clear that he would defend the Union and lead forces against any state that threatened to secede. After he died, a compromise was reached regarding the expansion of slavery, thereby staving off the war that would arrive in 1861.