Constructed in 1856, McBee Methodist Church is unique from most historic churches in its octagonal design. The Methodist was designed by John Adams, a local millwright, and named in honor of Vardry McBee, whose son donated funds for the construction of the church along with other members. Vardy McBee was one of the leading business and real estate developers in the region during the mid-19th century. He provided the funds that allowed for the construction of the Greenville Columbia Railroad Line and is often referred to as the "Father of Greenville,"

The church was added to the National Register of Historic Places on March 23, 1972. 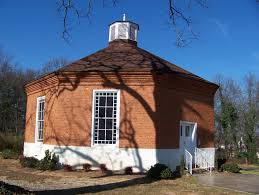