The Triangle Diner is one of the best-preserved classic diners in the country. It is also the oldest stainless steel style diner in Virginia manufactured by the renowned Jerry O'Mahony Diner Company. Located in the old town of Winchester, it serves as a quintessential example of the prefabricated roadside eateries that dotted the American landscape during the 1920s through the 1940s. The Triangle Diner is currently closed pending completion of a major renovation to restore it to its 1948 appearance.

The Triangle Diner is currently closed pending the completion of extensive renovations; image by Joel Bradshaw - Own work, CC0, https://commons.wikimedia.org/w/index.php?curid=19205084 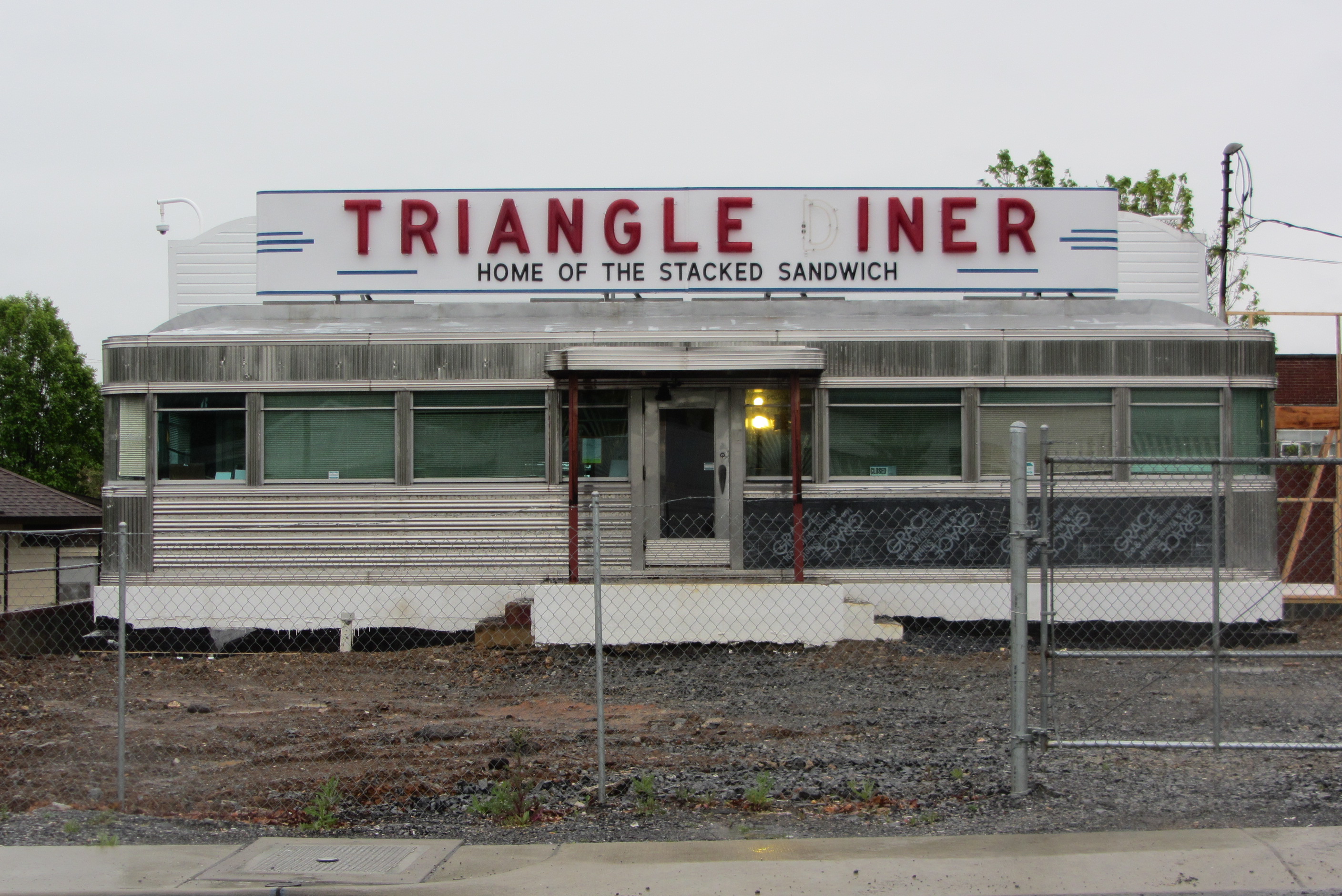 The classic roadside diner was a common sight during the mid-20th Century. Particularly popular during the period following the Great Depression, the prefabricated diner has come to represent many aspects of American culture, including its fascination with automobiles, optimistic capitalism, and the egalitarian nature of the country at large.

Walter Scott, who sold food out of a horse-pulled wagon, is credited for creating the first diner in 1872. In 1939, Roland Stickney designed a diner in the style of streamlined trains, particularly the Burlington Zephyr. Called the Sterling Streamliner, the look and feel of Stickney's diner would influence the next generation of prefabricated roadside eateries that sprang up throughout the country. One of the most notable manufacturers of prefabricated diners was the Jerry O'Mahony Diner Company of Elizabeth, New Jersey.

Under the motto "In our line, We lead the world,"1 the Jerry O'Mahony Diner Company produced what are often considered the "Cadillacs"2 of American diners. Of the 2,000 diners manufactured from 1917 to 1952, only about 20 are still extant today. These eateries were constructed in factories and shipped to their final destination by truck, rail, or boat. One such example is the Triangle Diner in Winchester, Virginia. This building is one of the best-preserved classic diners in America, and one of two known O'Mahony models in the state.

The Triangle Diner, "Home of the Stacked Sandwich," was ordered from the Jerry O'Mahony Diner Company by Newton B. Shingleton and dispatched to Winchester by train. Constructed in 1948, it is in a class of stainless steel post-war diners that are quite rare in Virginia. The Triangle Diner is also unique in that it has largely remained in its original location—the strategically-chosen busy intersection of U.S. Routes 11, 50, and 522—since its opening. (The diner was shifted back 50 feet on its .21-acre lot in 1960 after it was hit by a truck.)

Like other diners of the Moderne Design built in "The Stainless Steel Period" of 1945-1960, the Triangle Diner is longer than it is wide and has "an overall feeling of sunlit, polished cleanliness."3 It is a one-story building approximately 43 feet X 16 feet, made of stainless steel and supported by a concrete foundation. The facade includes 17 large windows that form a continuous window line along the front and sides of the diner. At the rear is an attached shed-roofed addition constructed ca. 1960. A freestanding metal sign, illuminated with neon tubing and topped with a large clock, sits northwest of the structure. The interior was decorated with polished terrazzo floors and featured blue Naugahyde booths and stools, a blue and yellow Formica counter, and a stainless steel back bar with sunray-pattered wall panels. Visible signage includes the Jerry O'Mahony Company motto and the words "Air Conditioned."

In 2009, the historic diner was designated on the Virginia Landmarks Registry. In 2010, it joined several other Virginia diners—the 29 Diner (Fairfax), Bill’s Diner (Chatham), and Burnett’s Diner (Chatham)—on the National Register of Historic Places.  The Triangle Diner is currently undergoing a major restoration effort and is closed pending completion of the work.