As their name implies, the Doullut Steamboat Houses have much to do with New Orleans’ extensive history with the steam powered boats that plied their way up and down the Mississippi River. Located in the city’s 9th Ward, Holy Cross neighborhood, the architecture of these two homes has been referred to, in a tongue-in-cheek manner, as steamboat Gothic. They were built by steamboat pilots, Milton and Mary Doullut. The first structure served as their home in 1905. The other was built in 1913 for their son, Paul, who was born in 1881. He happened to be a steamboat pilot as well. Both were designated historic landmarks by the New Orleans Historic District Landmarks Commission in 1977.

From this vantage point, it's easy to see the steamboat and Japanese influences on the Doullut Steamboat House. 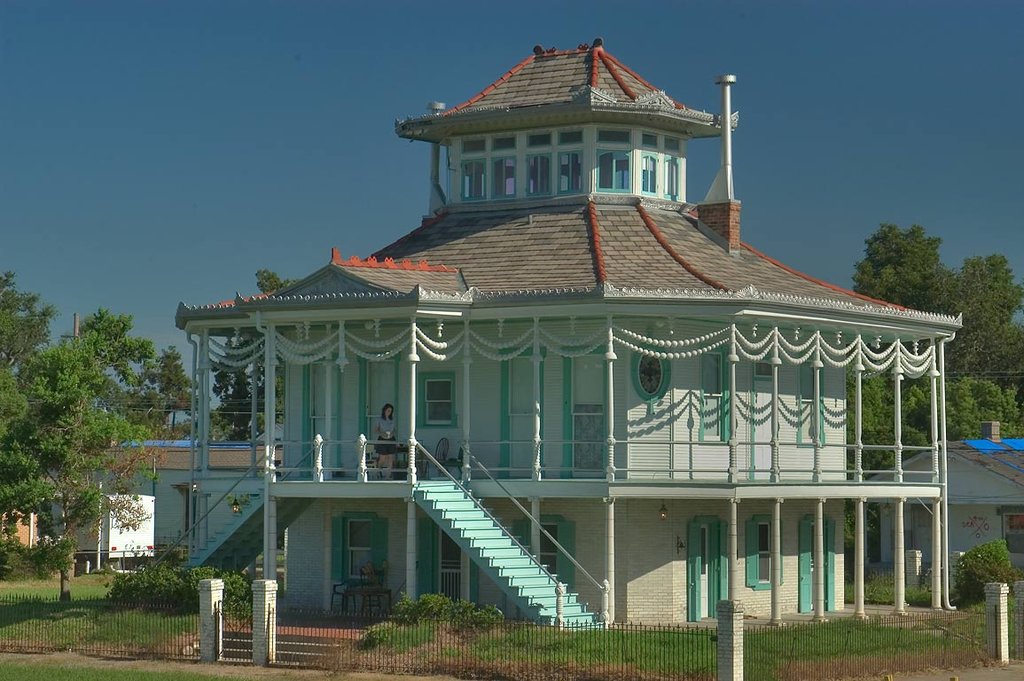 A close-up of the third floor pilot's house which provides an excellent view of traffic along the Mississippi River. 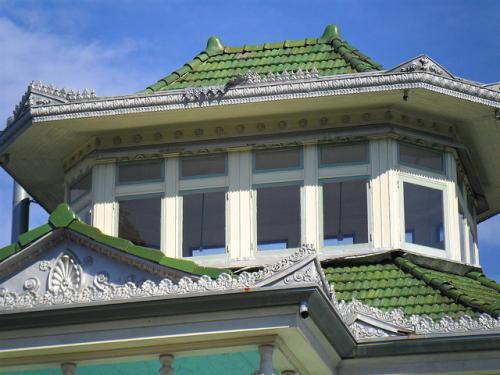 An eating area on the Steamboat House's first floor. Notice that the walls are clad entirely in ceramic tiles which saved the home from extensive flood damage, post-Katrina. 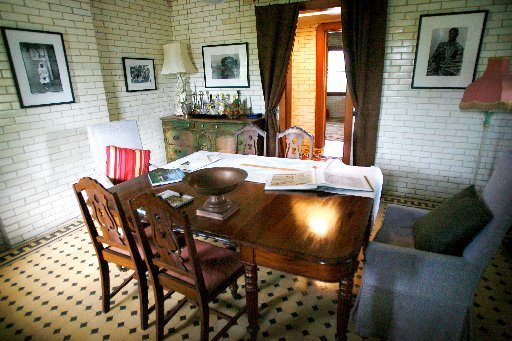 Yet another unique feature to the homes are these large carved cypress balls that resemble strings of pearls draped along the second floor porches. 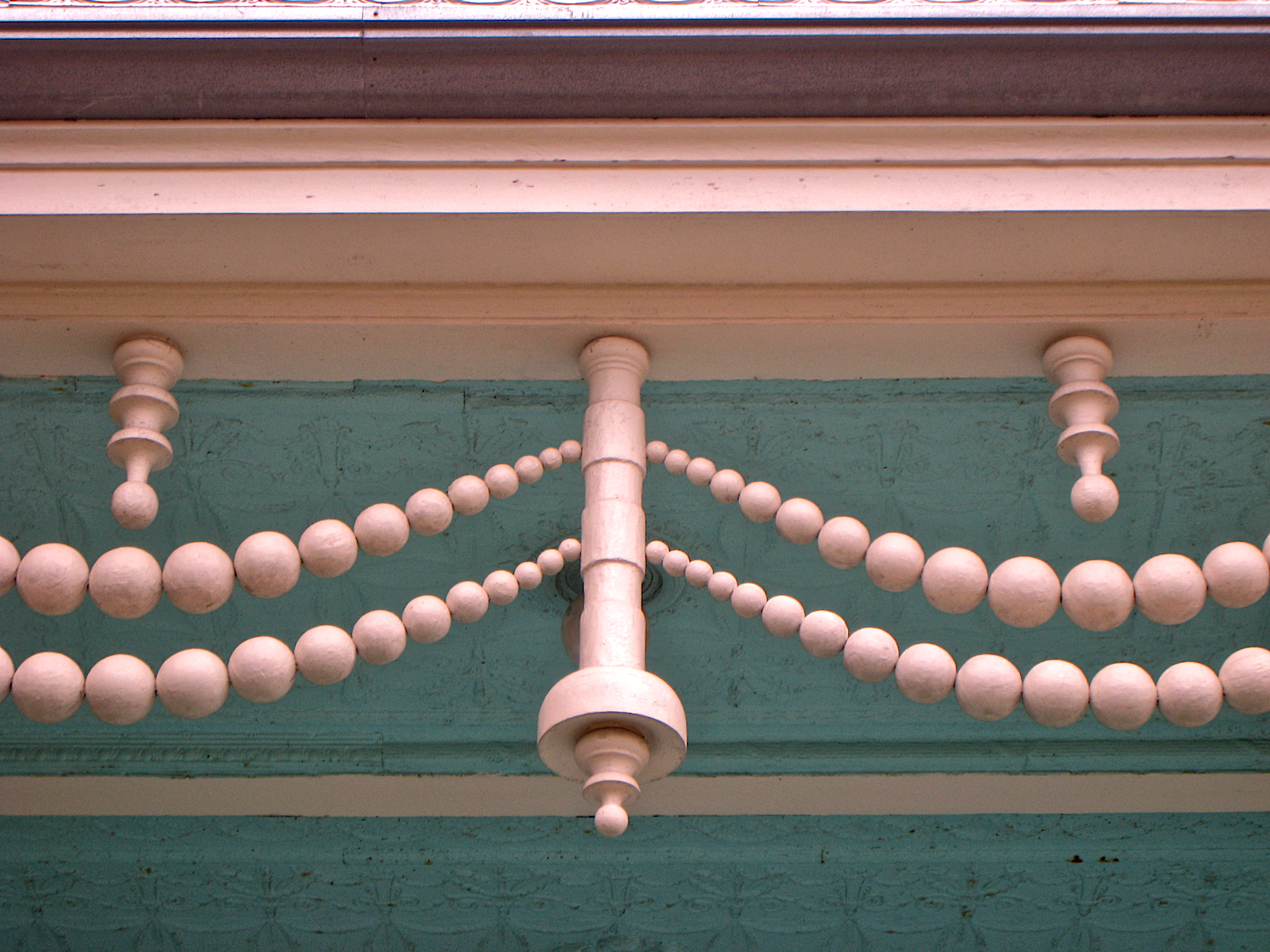 Milton Doullut and his wife Mary, thought to be the first licensed female riverboat pilot on the Mississippi, decided not to leave their careers completely behind them when they retired.  To that end, they built two truly unique homes on plots of land where they could still watch the river traffic from third-floor faux pilot houses.  They gleaned architectural inspiration from two separate sources, the first being, obviously, the steamboats they shepherded up and down the Mississippi and the second from the St. Louis World’s Fair of 1904.  It was there that they experienced the Japanese Exhibit that influenced the pagoda style roofs on each of the houses.

While the homes feature steamboat-style smoke stacks rather than chimneys, oval stain-glassed porthole windows, large second-floor wrap around decks, and top-floor wheel houses, perhaps their most functional design feature are the all-ceramic tile first floors.  The inclusion of this component permitted the houses to weather Hurricane Katrina’s 2005 floodwaters and emerge largely unscathed.  All that was required of the current owners was to move the first-floor furnishings to higher ground and then to hose out the lower floors once the flood waters had receded.  And yes, the homes were designed with Katrina-like flood waters in mind.

The homes also feature sets of exterior double stairs, on the river side, that permit guests to bypass the first floor and enter directly to the entertaining areas of the second floor.  Another unique element of the homes are the large carved cypress balls that are strung along the second-floor porch columnns like gigantic strings of pearls.  The homes’ interiors include pressed metal panels with cornstalk and crosshatched patterns that act as bas-relief wallpaper, pocket doors, and narrow inner hallways, similar to those found on steamboats, of course.

The homes are privately owned and not open for tours at the current time.  The owner of the 1913 home, Emile Domesnil, a New Orleans native, fell in love with its original design and purchased the home in 1995.  Ten years later, he opened his land to four FEMA trailers and eleven people who lost their Ninth Ward homes due to Katrina.  The owner of the 1905 house, Don Gagnon, a former river pilot himself, has had is home featured on This Old House.  Both homes have also been highlighted in numerous American and European architectural publications.