Though the building itself was constructed in 1907, the Coyote Post Office originally opened in 1862 as the Burnett Post Office, located in 12 Mile House along the Coyote Creek and the Mission Road (now Monterey Highway). The Post Office moved next door to the inn due to a dispute between Postmaster Frank Dassel and the U.S. Postal Service, serving the community until 1972. This made the Coyote Post Office the oldest surviving and functioning post office in Santa Clara County, and possibly in the state of California. It was moved to History Park in San Jose in 1974, where it is used as an exhibit space. The front room highlights postal history, while the back-room exhibit is dedicated to another form of communication: the history of Charles Herrold, father of radio broadcasting. 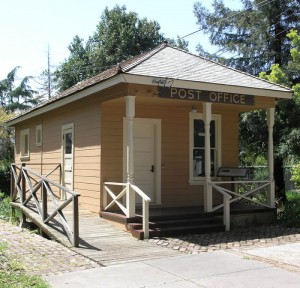 Marker at the front of the building. (image from Historical Marker Database) 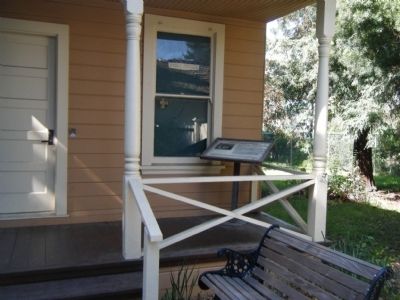 Once known as the Burnett Township, Coyote was settled in the early 1840’s and 1850’s by pioneer ranchers including Captain William Fisher, an Englishman by birth who came to California from his hometown of Boston after years at sea. Fisher married Liberata Cesena, who had been born in Mexico, and became a winemaker and cattle rancher. The small, agricultural town along the Mission Road consisted entirely of adobe buildings until the construction of 12 Mile House (twelve referring to the number of miles away from San Jose) in the mid-nineteenth century. 12 Mile House served the functions of tavern, hotel, and Blacksmith shop, and in 1862 became the town's post office, as well. Since the post office served a large area, it was convenient for patrons that the tavern and hotel were in the same building, and 12 Mile House held meetings and social gatherings. In addition to personal and business letters, the post office was the center for ordering and receiving goods for local businesses, of course. Initially, mail was delivered by stagecoach and horseback, until the Santa Clara & Pajaro Railroads arrived in 1868 (taken over by Southern Pacific Railroad the following year). The innkeeper, John Barry, doubled as the first Postmaster.

In 1882, Burnett was officially renamed Coyote, and in 1895 Emile Helpe took over as Postmaster. In the nineteenth and early twentieth centuries, the job of Postmaster or Postmistress was a political appointment, usually held by the owner of the post office building, the town grocery, or the drugstore. Sometimes it was held by the spouse of an important member of the community. Frank S. Dassel, a former grocer from San Jose, was Postmaster from 1906 to 1912, also working as a horse trainer for a local farm. During his tenure, an accounting discrepancy over one dollar led to a dispute between Dassel and the United States Postal Inspectors, who came back at him with an archaic, little-known regulation prohibiting the operation of a post office in an establishment serving liquor.

Fiacro Fisher took over as Postmaster when the post office was subsequently moved next door to 12 Mile House. There were two Fiacro Fishers, a father (Fiacro C.) and son (Fiacro J.) to whom the sources might refer. Fiacro C. Fisher was the son of Captain William and Liberata Fisher and took up management of several of the early farms and ranches in the area, including his family's. Fisher married Gertrude Hanks, the daughter of a sailor who had arrived in California with his own father. More likely (since the elder Fiacro Fisher had passed away by 1922), it was their son, Fiacro Julian Fisher, who built, in 1907, what became the Coyote Post Office next door to 12 Mile House. Like his father, Fiacro Julian was educated in the public schools in San Jose and at Santa Clara College, then took over the family farm. When Fisher left to fight in the First World War from 1917 to 1919, his wife, Teresa, managed their orchards, and the office of Postmaster was taken over by Albert R. Straub. After Straub, Signe Ober, daughter of Swedish immigrant parents, became Postmistress at the age of twenty-three. The position was held longest, from 1927 to 1945, by Postmistress Mari A. Rodoni, the wife of a Southern Pacific Railroad foreman.

By the mid-twentieth century, the Coyote Post Office was run-down and had to make do with cast-off equipment from other post offices. It had no phone until 1970. The structure was threatened with demolition in 1972 due to a road widening project that included relocation of the post office to a new building. The old Coyote Post Office, instead, was moved to History Park in 1974 and refurbished as an exhibit building.