The Bower was initially constructed in 1806 by Adam Stephen Dandridge I, though the property had contained a hunting lodge well before that. The earliest known owner of the property was Major General Adam Stephen, Dandridge's grandfather, who had received it as part of a grant from Lord Fairfax in 1753. During the Civil War, the Bower was used as a headquarters by Major General Jeb Stuart. The house remains in the Dandridge family to this day and was added to the National Register of Historical Places in 1982. 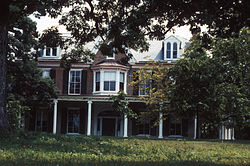 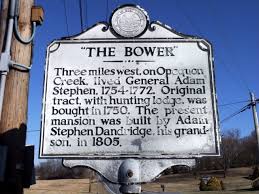 The Bower was built in 1806 by Adam Stephen Dandridge I, though the property is much older than that and was originally occupied by a hunting lodge. The land was given to Major General Adam Stephen, Dandridge's grandfather, by Lord Fairfax in 1753. Adam Stephen would go on to found Martinsburg, West Virginia. The hunting lodge was passed down first to Stephen's daughter, Ann Stephen, then to Dandridge in 1791 before being built over.

During the Civil War, the Bower would be used as a field headquarters by Confederate Major General J.E.B. Stuart. One of the horses bred at the Bower, named Lucy Long, would be gifted to General Lee. Long after the war, the house was used as a summer home by Bishop Edmund Pendleton Dandridge. It has since remained in the Dandridge family's possession and was entered into the National Register of Historical Places in 1982.

The house consists of 2 1/12 floors and is constructed out of brick in the Federal Style. The most prominent feature of the house is the double-door front entrance with semi-elliptical fan light and paneled side lights. Following a fire in 1892, parts of the house were reconstructed and expanded upon in Gothic Revival style, though mostly on the second floor.