The San Jose Fire Museum (SJFM), located in the 1951-built Old Fire Station One, holds exhibits dating to the city's firefighting efforts dating to as early as 1810. From historic documents to steam-powered fire engines to badges and tools, the SJFM strives to hold the most complete fire museum collection in the nation. With a rich history of firefighting from its Spanish Pueblo days in the 1770s on, San Jose seems a fitting location for such a museum.

Franklin Engine 3, the "engine that saved San Jose" during the fires resulting from the 1906 Earthquake (image from SJFM) 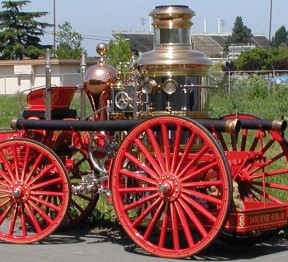 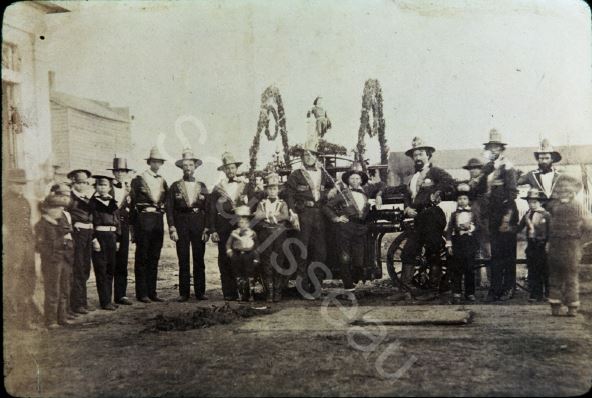 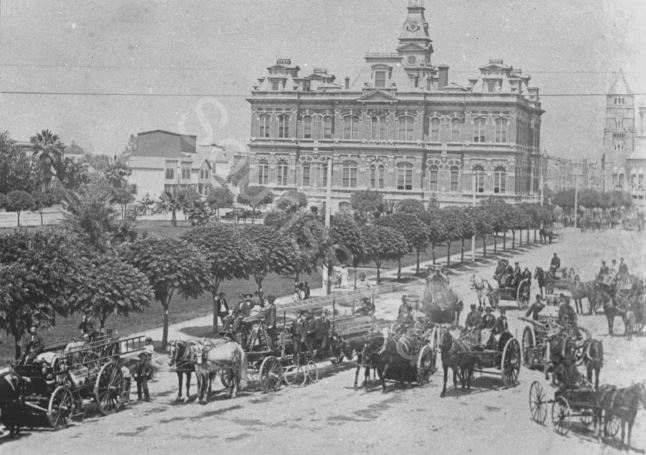 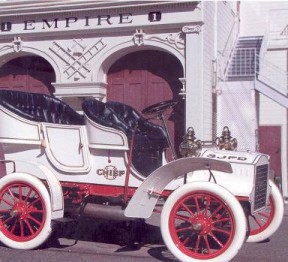 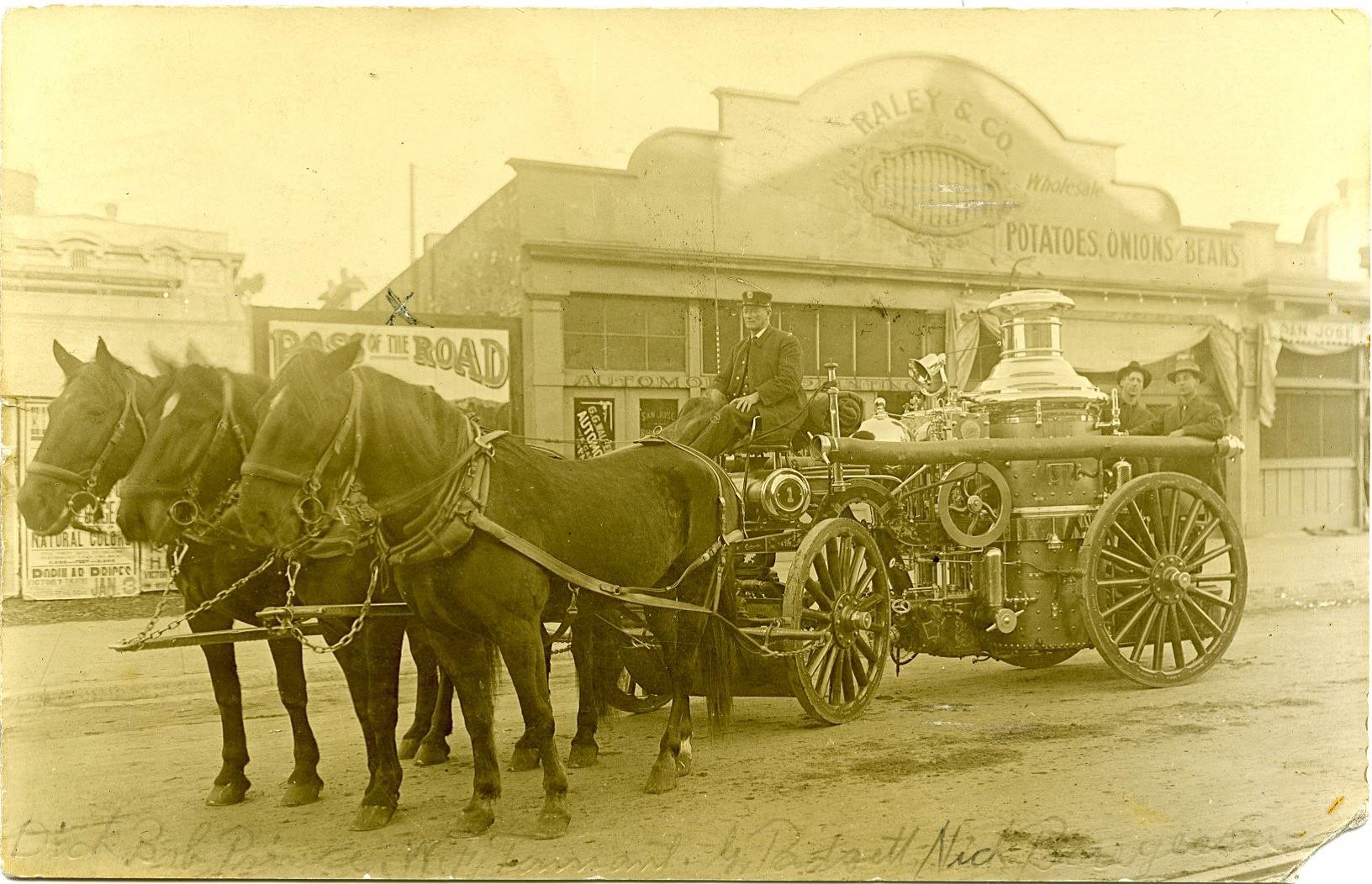 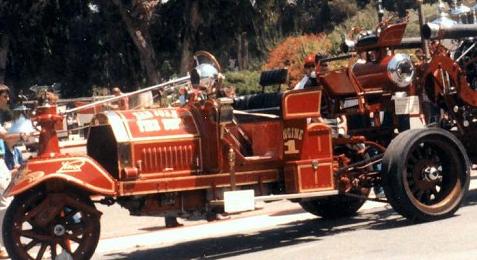 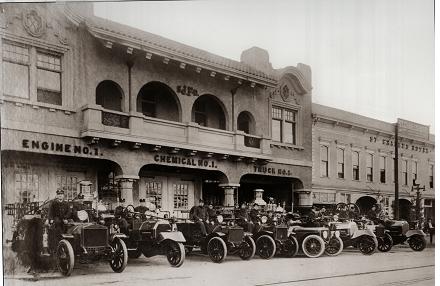 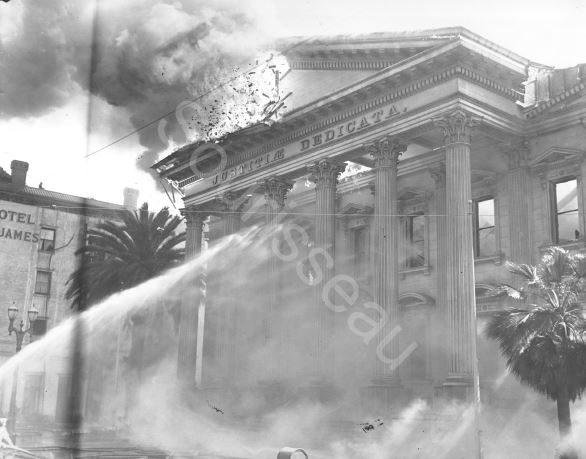 The 1931 Mack pumping engine purchased in response to the Courthouse Fire, which served until 1974 (image from SJFM) 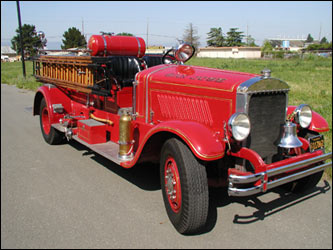 Throughout its history, San Jose has taken fire safety seriously. When the Pueblo de San Jose de Guadalupe was founded by the Spanish in 1777 (see Plaza de Cesar Chavez), the adobe houses were spaced widely apart to prevent the spread of flames from one building to another. Spanish ordinances in the pueblo included keeping cooking and haystacks at a safe distance form the home, and keeping a full bucket of water at each household at all times.

When San Jose became the first capital of the newly formed State of California in 1850, Ordinance 80 was passed, restricting building materials and requiring inspections of fireplaces and stovepipes. After a two-day fire destroyed multiple buildings and injured two volunteer fire-fighters, large public cisterns were installed in downtown San Jose to provide water for emergencies, and fire districts were established and monitored by the volunteer Eureka Fire Company No. 1, who provided their own equipment. Nonetheless, the State House burned down in 1853, prompting the city council to take stronger measures for fire protection. Hooks, ladders, and a pumper were purchased, and a fire station was constructed on land donated by volunteer Frank Lightson, with citizen donations paying for the station's bell. In 1854, the San Jose Hook and Ladder Company No. 1, also known as the German Company, was established with Joseph McGill as foreman. At the first Fireman's Ball in February of that year, the fire truck was named Young America, and the Company motto was established as Semper Perates (Always Ready). Volunteers had to apply to the Company, whose members voted by secret ballot on whether to accept a given nominee. Later in the year, the Empire Engine Company, also known as the Irish Company, under foreman Charles E. Allen, was added to the Fire Department.

A paid fire department of 29 men was created in 1876, with J. Chris Gerdes as Chief Engineer. The three fire companies, Hook and Ladder No. 1, Empire Engine No. 1, and Torrent Engine No. 2, were housed together at the Lightson property location, creating a certain air of rivalry between them. The department used steam-powered pumpers pulled initially by men, and then, after ten years of use, by horses. The following year, a fire alarm system was established which used pull boxes to send a telegraph to the fire department. The Empire Fire Station was built on South Second Street in 1869 to house the Irish Company, a new firehouse was built at North Eight Street in 1876, and Torrent No. 2 moved into part of City Hall, then located on North Market Street, and with the construction of a new City Hall in 1885, the Fire Department took over the whole of the old City Hall. In spite of the presence of a paid department, many volunteer companies, such as the Eureka Hose Company, continued their work, enjoying the excitement, camaraderie, and sense of community it provided. These companies played an important role in unincorporated areas of the city.

During the 1906 Earthquake, the original firehouses were destroyed, but firefighters pulled the steamers from the ruins and worked to save other buildings. Franklin Engine No. 3 earned the title, "the engine that saved San Jose," and is featured in the San Jose Fire Museum. The rebuilt fire department building, constructed in 1908, was in the Mission Revival style and even featured a billiards room. In 1914, the department began the process of switching from horse-drawn to motorized engines. By the mid-twentieth century, it was time for the growing fire department to move to a new, modern building, the Art Deco style Central Fire Station or Fire Station One at Market and St. James Streets. This building was retired in 2000, and became the San Jose Fire Museum in 2015-2016, as well as achieving City Landmark status and nomination to the National Register of Historic Places. The collections of the San Jose Fire Museum date back to 1810, and include horse carts, hand pumpers, hooks and ladders, pumpers and steamers, chemical hose wagons, and fire chiefs' cars; journals and other written documents; and badges, helmets, and other equipment.