On May 14, 1864, two days after Major General James Ewell Brown “J.E.B.” Stuart died from a wound received at the Battle of Yellow Tavern, the Richmond City Council created the Stuart Monumental Association with the task of erecting a monument to the Confederate Army’s most famous cavalry leader. The Stuart Monumental Association failed to produce a sizeable monument and dismantled by 1866. Another 25 years passed before another effort manifested to memorialize Stuart. In 1892, the Veteran Cavalry Association of the Army of Northern Virginia incorporated and began the process to erect a monument to the Confederate leader. In 1903, the Association selected a design by sculptor Frederick Moynihan, and a year later a site was chosen along Monument Avenue at the intersection of Lombardy and Franklin Streets. On May 31, 1907, the J.E.B. Stuart Monument was unveiled to a crowd of thousands during the United Confederate Veterans Reunion, just eight days prior to the unveiling of the Jefferson Davis Monument. After his death, the legacy of Jeb Stuart played a pivotal role in the creation and proliferation of the Lost Cause ideology and the personification of the Virginia Cavalier, serving as the South’s chivalrous knight-errant. Confederate monuments such as the one to Jeb Stuart have been scrutinized in recent years for their promotion of racism and the Lost Cause ideology. In June 2020, the City of Richmond removed the Stuart Monument and other Confederate statues from Monument Avenue and placed them in storage. 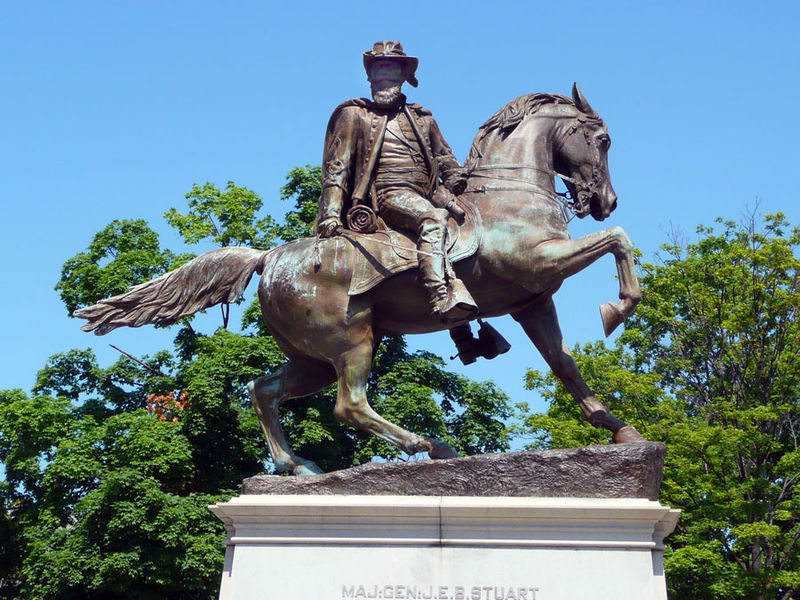 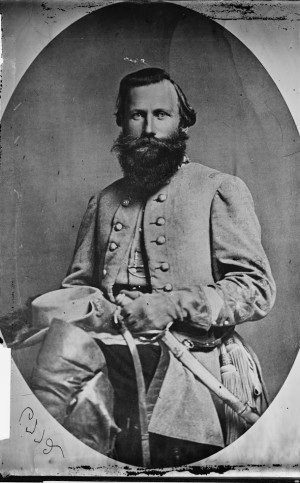 J.E.B. Stuart portrayed in his famous cape and plumed hat. 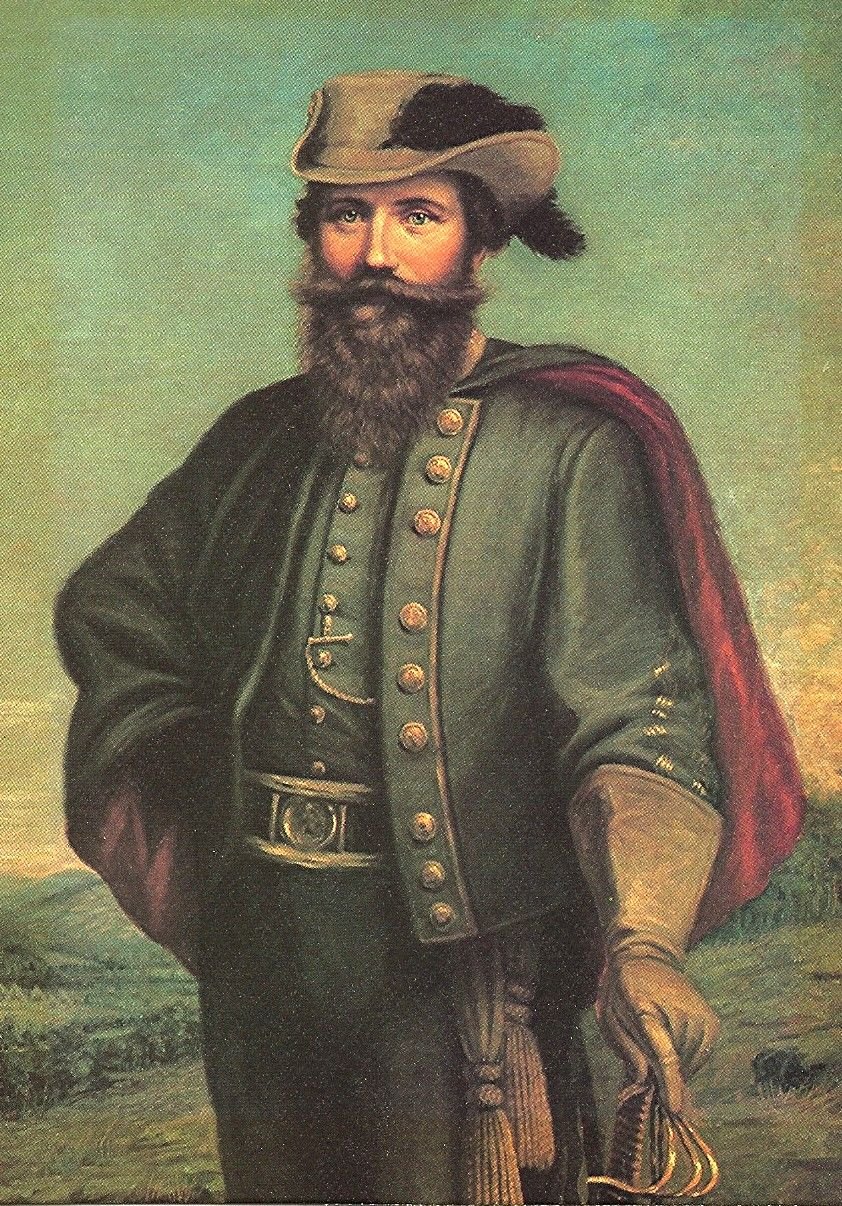 A young J.E.B. Stuart prior to his graduation from West Point. 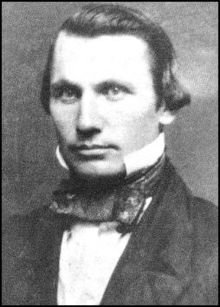 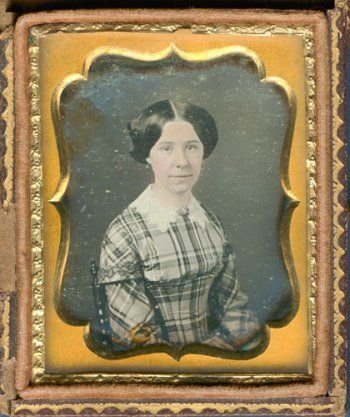 A crowd watches the removal of Richmond's statue to Jeb Stuart 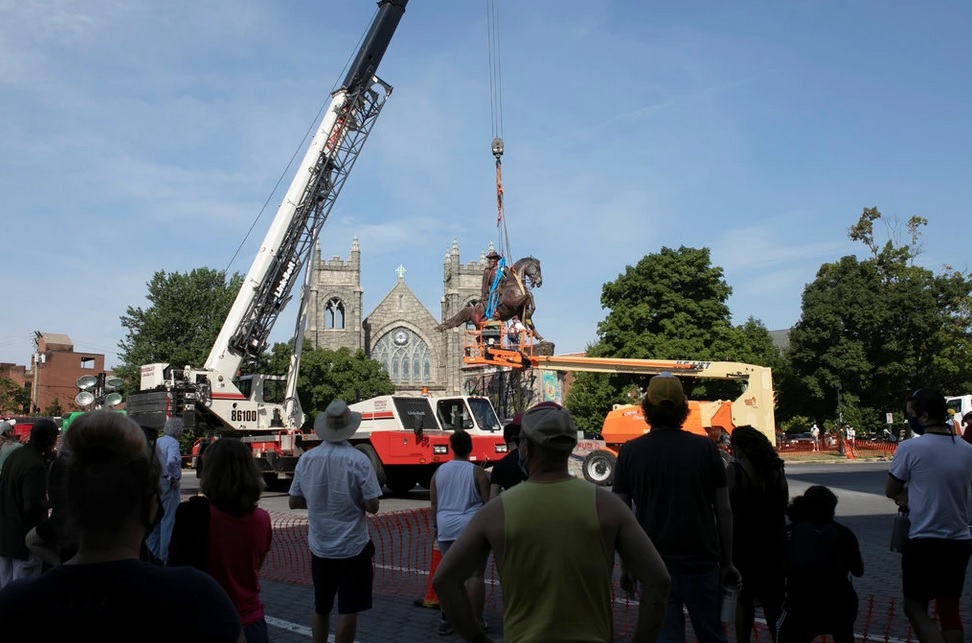 James Ewell Brown Stuart, more commonly known as J.E.B. or Jeb, was born on February 6, 1833 as the eighth of eleven children to Archibald and Elizabeth Hugh Holmes Stuart. The Stuarts were a renowned military family of Virginia; his great-grandfather, Major Alexander Stuart, led a regiment at the Battle of Guilford Courthouse during the American Revolution, and his father served in the War of 1812. Archibald Stuart also represented Patrick County in the Virginia General Assembly and Virginia in the U.S. House of Representatives.

The Stuarts lived on a family farm in Patrick County known as Laurel Hill, which was operated by enslaved labor. In 1848, the fifteen-year-old Stuart enrolled at Emory & Henry College in Emory, Virginia and stayed for only two years before accepting an appointment to the United States Military Academy in West Point, New York. During his time at West Point, Stuart’s fellow classmates bestowed upon him the nickname “Beauty,” which came from his famous good looks and charm. During this time, he became acquainted with Robert E. Lee and Lee’s nephew Fitzhugh Lee. In 1854, J.E.B. Stuart graduated 13th out of 54 in his class; prior to graduating, he was designated an honorary cavalry officer because of his skillful horsemanship.

After West Point, Stuart received the commission of brevet second lieutenant and was assigned to the U.S Regiment of Mounted Riflemen in Texas where he participated in the campaign against the Apaches. While in Texas, Stuart met Flora Cooke, daughter of Lieutenant Colonel Philip St. George Cooke, commander of the 2nd U.S. Dragoon Regiment. Stuart and Flora became engaged two months after meeting and married on November 14, 1855. The couple would own at least two slaves prior to the Civil War. The next year, Stuart became involved with the conflicts in what became known as Bleeding Kansas, surviving a gunshot wound in 1857. While on a visit to Washington, D.C. in 1859, he volunteered his services to Robert E. Lee and accompanied Lee’s regiment of Marines to Harpers Ferry, WV where John Brown attempted to raid and seize the federal arsenal. Stuart reportedly recognized Brown from their days in Kansas.

At the outbreak of the Civil War, Stuart received a promotion to captain in the United States Army, but quickly resigned to join the Confederate Army once Virginia seceded. He entered the Confederate Army as a colonel and served under Lieutenant General Stonewall Jackson. Stuart’s father-in-law remained loyal to the United States, which caused a long-standing rift in the family. Stuart wrote to his brother-in-law, future Brigadier General John Rogers Cooke, saying that Philip “will regret it but once, and that will be continuously.” The animosity between these two men became so great that Stuart changed the name of his toddler son from Philip St. George Cooke Stuart to James Ewell Brown Stuart, Jr. Father-in-law and son-in-law never spoke again.

Stuart’s tremendous assistance during the early Battles of First Bull Run and the Seven Days’ resulted in his promotion in 1862 to major general and placed in command of the cavalry brigade of the Army of Northern Virginia. He proved to be such a successful reconnaissance and troop leader that on a few occasions, his Confederate cavalry completely circled Union troops and once returned with 1,200 enemy horses. However, Stuart reputation was marred during the Gettysburg Campaign, during which he led his men on a raid that prevented them from providing reconnaissance to Robert E. Lee and forced him to miss much of the battle. Stuart only lived to see action for one more year, being mortally wounded on May 11, 1864 in an attempt to protect Richmond during the Battle of Yellow Tavern. Major General J.E.B. Stuart succumbed to his wound on May 12.

The Richmond City Council wasted no time in initiating a memorial process for J.E.B. Stuart, passing a resolution to create a committee to design and erect a monument for the late cavalry leader two days after his death. In 1866, the Stuart Monumental Association formed with the intent on placing a monument at Stuart’s gravesite in Richmond’s Hollywood Cemetery. However, Edward Valentine previously created a bust of the late Confederate leader which was deemed a sufficient monument for time being, so the Stuart Monumental Association disbanded. Another 25 years passed before another memorial effort reemerged. Inspiration for the J.E.B. Stuart Monument came from a memorial erected by employees of the Chesapeake and Ohio Railway to honor its former president Brigadier General Williams C. Wickham, who served underneath Stuart. Not to be outdone, Stuart’s former cavalrymen formed the Veteran Cavalry Association of the Army of Northern Virginia on October 2, 1891 and tasked themselves to create a monument to their leader.

The Panic of 1893 stalled the project’s development until 1896, when the United Confederate Veterans held a reunion which motivated the Association to generate public awareness of the project - eventually receiving $20,000 in total from the Richmond City Council and the Virginia General Assembly. In 1903, the Association commissioned an equestrian statue design by Frederick Moynihan, and one year later settled on a site along Monument Avenue at the intersection of Lombardy and Franklin Streets. During the United Confederate Veteran’s reunion in the summer of 1907, the J.E.B. Stuart Monument was unveiled in a ceremony attended by Flora Stuart and the widow of Stonewall Jackson, along with a crowd of Confederate veterans. Stuart's aide de camp, Theodore Garrett, gave the keynote speech during which he extolled Stuart's "patriotism and pure life," "heroic spirit," and "glorious memory," and recounted his military encounters from before and throughout the Civil War.

The late-19th and early-20th centuries experienced a sharp increase in public art devoted to the Confederacy, particularly in the South. The dedication of the J.E.B. Stuart Monument was part of the growing trend of proliferating the Lost Cause ideology, which sought to minimize the horror of chattel slavery and the central role of the institution in the South's attempt to secede. After his death, J.E.B. Stuart’s legacy became an embodiment of the Lost Cause ideology and the personification of the Virginia Cavalier myth, serving as the South’s chivalrous knight-errant. Handsome, daring, intelligent, respectful, loyal, and cheeky, Stuart’s vibrant personality became what every Postbellum Southern man sought to be. During the Civil War, his brazen antics became well-known, such as stealing Union General John Pope’s uniform during a raid. Stuart famously wore a plumed hat with a red cloak, which only lent to the later romanticizing of the Confederacy and its leaders. In literary publications and other public forms of propaganda, Stuart was glorified for his heroic deeds to defend the South, staring death in the face, and ultimately sacrificing his life in an attempt to preserve the Southern culture and use of enslaved labor.

Along with the other Confederate statues on Monument Avenue, the J.E.B. Stuart Monument has been scrutinized in recent years for its promotion of racism and the Lost Cause ideology. In the wake of white supremacist activities in Charlottesville, Virginia and elsewhere, calls circulated in 2017 and 2018 for the possibility of adding interpretive signs to the monument or removing it altogether. In 2020, the Virginia General Assembly passed legislation allowing local cities and counties to remove Confederate monuments. Approving the bill, Virginia Governor Ralph Northam stated, "These monuments tell a particular version of history that doesn't include everyone. In Virginia, that version of history has been given prominent and authority for far too long."[10]

Following the killing of Black man George Floyd and nationwide protests over systemic racism in the summer of 2020, Richmond Mayor Levar Stoney ordered that the monuments to J.E.B. Stuart and other Confederate leaders on Monument Avenue be removed. On Tuesday, June 30, work crews removed the Stuart Monument, and it has since been moved to an undisclosed location for storage. Along with the Stuart Monument, statues to Confederate leaders Jefferson Davis, Thomas “Stonewall” Jackson, and Matthew Fontaine Maury in Richmond have come down.

For most of the Civil War, Richmond, Virginia served as the capitol of the Confederate States of America. Union forces made numerous attempts to retake this site of great strategic—and symbolic—importance, inspired by the battle cry: "On to Richmond!" Its proximity to the fighting made Richmond a center for hospitals and military prisons. On April 3, 1865, Richmond fell to the Union army; General Robert E. Lee surrendered soon after, ending the Battle of Appomattox Courthouse. This tour explores Richmond's central role during the most formative conflict in United States history—and remembers those who fought in it.