Named after Cincinnati native and Supreme Court Justice, the Potter Stewart United States Courthouse was built in 1938 and is a fine example of Art Deco and Art Moderne architecture. It houses the U.S. Court of Appeals for the 6th circuit and the U.S. District Court for the Southern District of Ohio, and the U.S. Marshals Service. The interior features include the two-story main lobby, the original elevator lobby with decorative aluminum elevator doors, and the original wood paneling in the courtroom. The rest of the space—440,000 square feet—is available for rent. Potter Stewart (1915-1985) was actually born in Michigan while his family was on vacation. He served as a Supreme Court Justice from 1958-1981. The building is situated next to Fountain Square, a small public park where several presidents, including Abraham Lincoln, had visited. The courthouse was recently added to the National Register of Historic Places in 2015.

The Potter Stewart United States Courthouse was built in 1938 and is the second federal courthouse at this location. 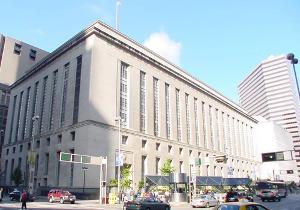