This monument depicts the famed ancient Roman figure, Lucius Quinctius Cincinnatus, for whom the city of Cincinnati is named. The man responsible for giving the city its name was Arthur St. Clair (1737-1818), the first governor of the Northwest Territory during the late 18th century. He did so in 1790, establishing Hamilton County and changing the name of the town inside it, then called Losantiville, to Cincinnati. He also designated Cincinnati as the county seat. St. Clair belonged to an organization called the Society of the Cincinnati, whose initial members were officers of the Continental Army during the American Revolutionary War. The Society, which is still in existence today, promotes the ideals of the of the war and the fellowship of its members. It is a hereditary organization but it also includes honorary members who support its goals. 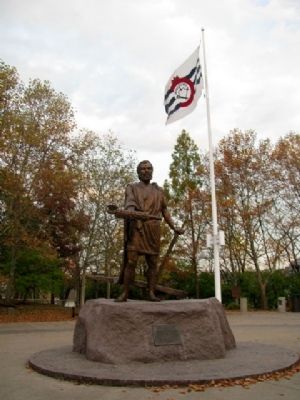 Lucius Quinctius Cincinnatus is revered for his actions during the early years of the Roman Republic. He served as Dictator of Rome in 458 B.C.E., leaving his farm to become the sole ruler of Rome to rescue a surrounded Roman army. Upon achieving victory and rescuing the army, Cincinnatus relinquished his power and returned to his farm. This act of sacrifice for the common good is what inspired the creation of the Society.