Established in 1988, this park along the river is called Bicentennial Commons at Sawyer Point. Numerous historical markers and interpretive signs pertaining to Cincinnati's history are placed along the paths. At this particular location is a series of historical markers that are near to the statue of Lucius Quinctius Cincinnatus. One tells the story of The Sultana, a 260 foot steam ship that suffered a massive explosion in April 1865 less than a mile upriver from this point. Of the 2,300 freed Union soldiers on board, 1,700 died, making it the worst maritime disaster in U.S. history. Two other markers discuss the contributions Irish and German immigrants made to the city. Another marker commemorates the first black brigade formed during the Civil War. In 1862 black men, who volunteered to enlist in the army, were instead forced to build fortifications. However, in September of that year the army officially formed the Black Brigade of Cincinnati, comprised of 1,000 men. They continued to build fortifications and do other work, but they were recognized as a military force. Many fought in other Ohio regiments after the group disbanded. Going back further in time, another marker discusses France's first forays into the Ohio River Valley in 1749.

These markers are just a few feet away from the Lucius Quinctius Cincinnatus statue. 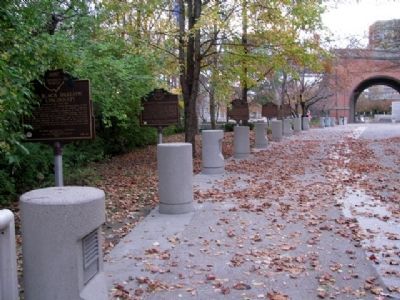