The Shoshone Ice Caves were created through a natural anomaly as lava tunnels created this abnormally cold cavern. This cavern has a rich history as area tribes utilized the caverns and they became so central to the Shoshone that they entered into the sacred myths. One legend is that a Native American princess by the name of Edahow was buried in the ice-mass within the cave and is patiently waiting to reemerge. Commercial development during the 1940s nearly destroyed cavern but the area has been preserved. 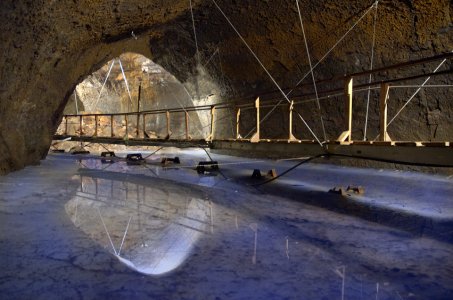 During the 1940s as commercial development was expanding, some individuals began to remove ice from the cave. This change to the cavern's ecosystem, along with a poorly placed access tunnel, led to the destruction of the ice cave. Even though the cave was still intact, these changes meant that it no longer maintained the freezing temperatures necessary for producing ice.
In the 1950s, Russell Robinson acquired this land and worked to return the cavern to the previous state. Robinson studied the caverns and charted the air flow through the passages. His research allowed him to restore the cave back to its original freezing temperatures thus allowing it to maintain its name as an ice cave 1962.

As tour guides explain the geologic, historical and volcanic background of the Shoshone Ice Cave, they also stress the importance of keeping the door to the cave shut. If the door is left open during a hot summer day, it would cause the ice within the cave to melt. The lava tube that is the basis of this cave is 1,000 feet long with ice as depths that range from eight and 30 feet. The ice is so solid that the tour guide stands on it while discussing the cave with the tourists.