The Rector Hotel was designed by John Graham Sr., a Seattle architect employed by Alson Brown, the son of a timber baron who hoped to diversify his families investments. The hotel's location next to the Grand Opera House proved fortuitous and the two buildings were adjoined at the balcony level. The hotel was one of many built during Seattle's initial economic and population boom (1902-1920) and demonstrates the rapid commercial expansion of the city during the Klondike Gold Rush.

The St. Charles Hotel near mid-century 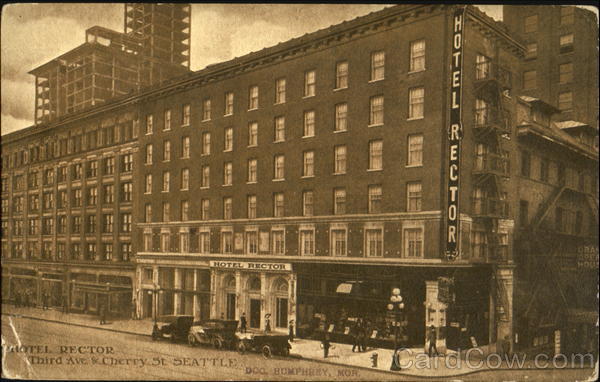 At the time of Seattle's economic and population boom, a period often associated with the Klondike Gold Rush, the Rector Hotel and the Grand Opera House became one of the leading social centers of the city. The downtown region grew substantially with multiple steel-frame high-rise buildings facilitated by investment from families that had profited during the from timber, shipping, and other extraction industries.
The growth came at an environmental price as hills were leveled to make room and gather materials for construction. Although Seattle had its share of older-style hotels, few had modern amenities. Shortly after the 1889 Great Fire, a total of 63 hotels were in operation in Seattle by the turn of the 20th century. A second hotel boom occurred between 1906 and 1910, largely tied to the arrival of the Alaska-Yukon-Pacific (AYP) railway. The 1909 Seattle Exposition of 1909 brought 3.7 million visitors to the city and by 1910, Polk’s Directory included over 475 hotel listings.
The Rector Hotel was built for Alson Lennon Brown, son of real estate and timber pioneer Amos Brown, in 1911. The building was designed by Seattle architect John Graham and operated from 1913 - 1918. Significant in the development of the Rector Hotel were the functional components incorporated into the design of the building that served the abutting Grand Opera House. The most noticeable feature is the prominent entrance from the stair landing in the Rector Hotel’s lobby that opened directly to the balcony of the theater. However, in 1917, the Opera house suffered mightily from a major fire. The destruction was so great that plans were made to transform the structure into a parking garage.
After the fire to the Opera House, the hotel was sold and reopened as Hotel St. Charles. The building served as a hotel for most of its history. From 2004 to the present, the building has served as an apartment complex.