Completed in 1938 by famed Floridian architect, Henry Hohauser, the Essex House is now attached to the adjacent Clevelander Hotel both physically and financially. The Essex House was designed by Hohauser to resemble an Art Deco landlocked ocean liner, complete with a tower that resembles a ship’s smokestack. In fact, his maritime alterations to the Art Deco motif have since been referred to as Nautical Moderne. Today, the Essex House is a chic, 70-room landmark within South Beach’s larger Art Deco District and features a narrow garden courtyard, a modest sized pool, and a well-reviewed Asian restaurant.

The sun sets on the Nautical Moderne design of the Essex House. 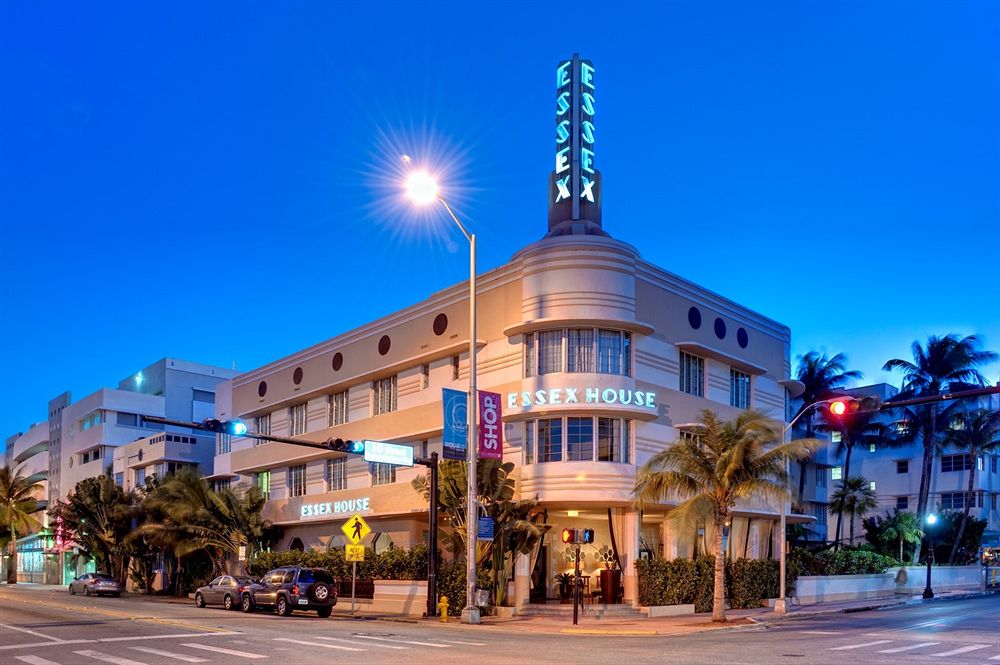 Earl Lapan's Everglades mural can be seen over the lobby's faux-marble fireplace. 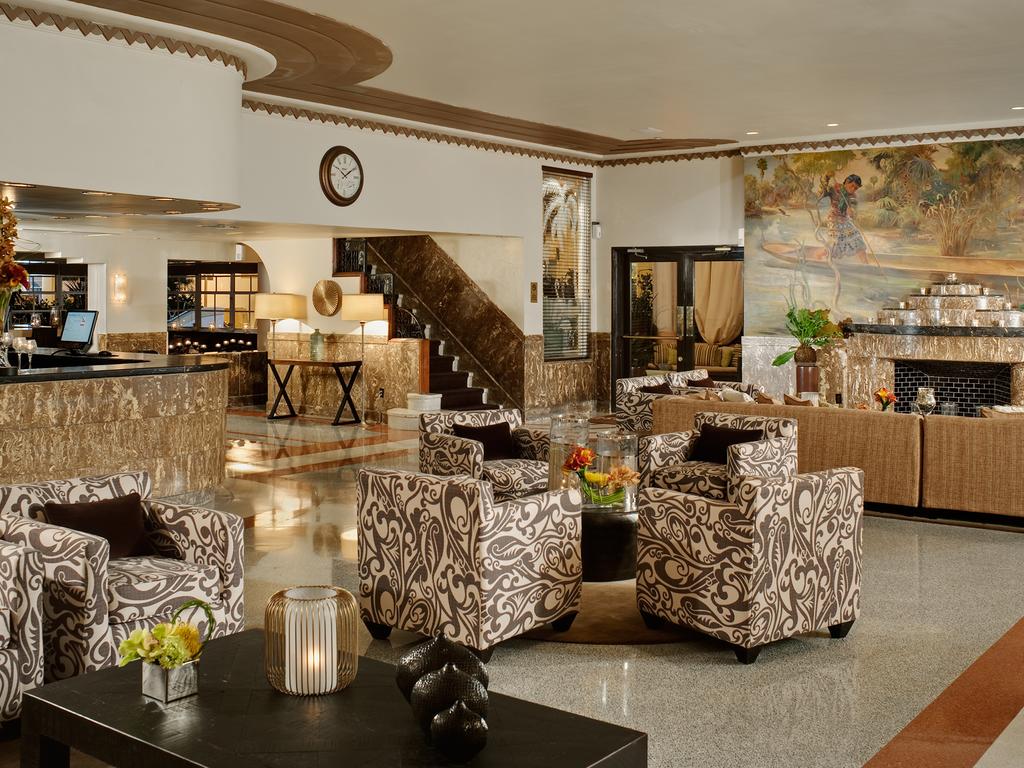 The Essex House's pool in a tropical setting. 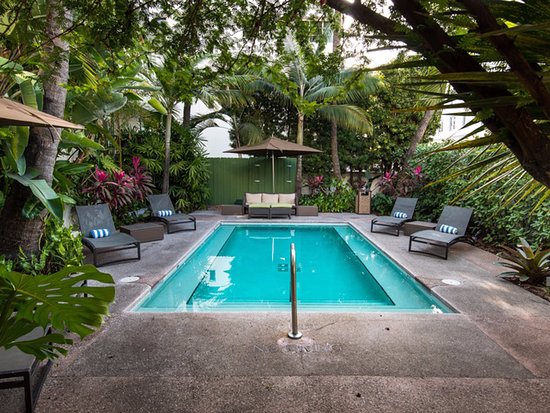 The Essex House's architect, Henry Hohauser, sharing a dance with his wife. 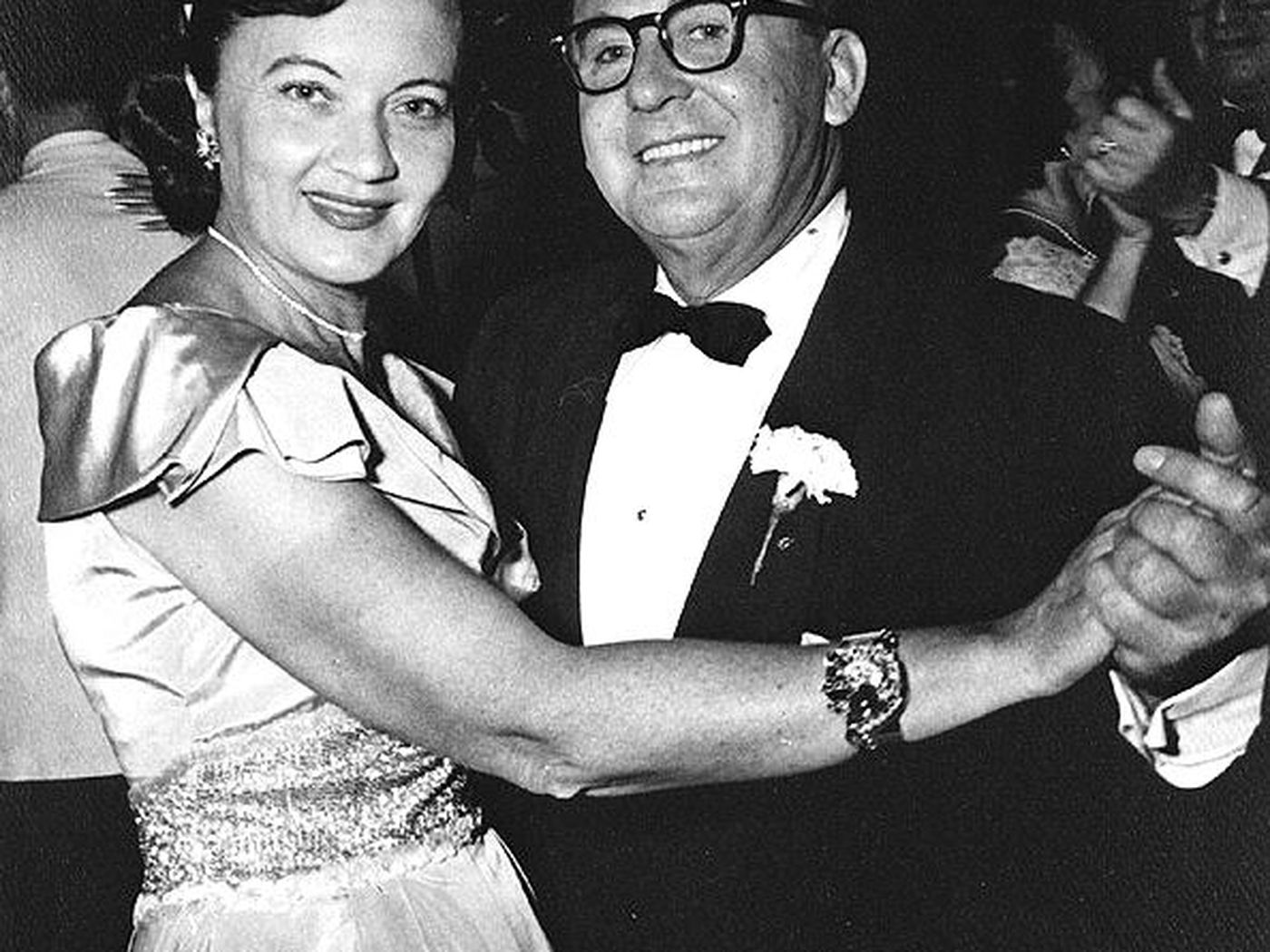 Henry Hohauser was born in New York and received his architectural training and education at the Pratt Institute of Technology.  He came to South Florida in 1932, shortly after the area had been devastated by the Great Miami Hurricane of 1926 and during the heart of the Great Depression.  He, and other architects hit upon the idea of utilizing Art Deco designs for their buildings as a cost-effective means to recreate and reimagine South Beach.  Hohauser understood that by keeping design and building costs low, he, and the building’s owners could expand their client base to include patrons of modest means.  They also saw the potential of the greater Miami area as a popular vacation/retirement destination for the entire eastern half of the country.

To that end, Hohauser designed over 300 apartment buildings, hotels, stores, restaurants and theaters in and around Miami Beach, to include the Essex House, the Cordozo Hotel and the Beth Jacob Social Hall and Congregation which now houses the Jewish Museum of Florida – FIU and is listed on the National Register of Historic Places.  Hohauser died in 1963 and has since been honored by being named one of the 100 most influential people in South Florida history by the Miami Herald in 1993 and a “Great Floridian” by the state in 2001.

Hohauser designed the Essex House with a prominent rounded façade with a recessed main entrance held up with simple, unadorned pillars.  It features the mainstays of Art Deco in the form of porthole windows along the top floor, horizontal lines, long eyebrows over the windows for shade, and neon signs on the main building and vertically on the hotel’s tall, thin spire.  The rounded façade, in combination with the spire, give the building its ship-like appearance.

Within the hotel’s lobby there is a large polychrome mural located over the original fireplace that features a large, curved mantel.  The mural is that of an Everglade landscape that includes a Native American in a dugout canoe.  The mural was painted by Earl Lapan who also painted over 300 murals, paintings and ceiling designs all over South Florida in such locals as the Victor and Flamingo Hotels.  Sadly, many of his works have been removed, painted over or have disappeared along with the buildings that once contained them.  The Essex House mural was actually restored by Lapan himself in the late 1980s, at which time it is rumored he added the small alligator in the mural’s upper left-hand corner.  The story of the mural relates how Lapan was originally instructed not to include an alligator as the hotel’s owners believed its patrons had a fear of the large reptiles and they sought not to exacerbate those fears.