Built in 1929, the L-shaped, 15 story stone surfaced building stands at the point of Seattle's once flourishing economic and transportation center. The building housed timber, shipping, and railway industries -- all representative of Seattle's economic drivers. 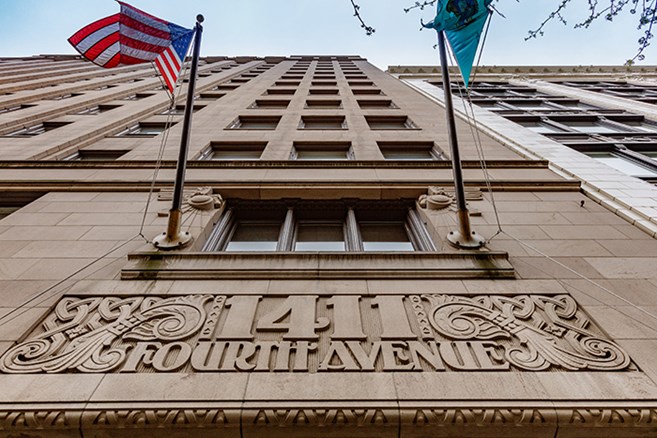 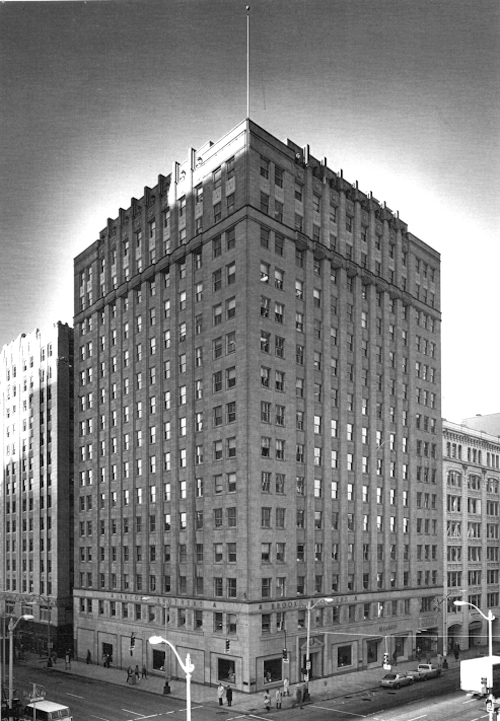 The Fourth Avenue Building in Seattle demonstrates the importance of the railroad and to Seattle, as well as most of the U.S. in the late 19th and early 20th Century. As well, shipping interests in Seattle proved to be a significant influence in the city's expansion, both in population and economy. The entire 1st floor of the Forth Avenue Building, finished in 1929 before the Great Depression, was occupied by shipping industries and the Great Northern Railway.
Seattle's rapid transition from Western boom town to metropolis arrived in the late 19th century, mainly due to the Klondike gold rush that spurred population movements, investments in shipping from Seattle, and the all-important arrival of the Railroad -- a vital component to urban economic viability during the Industrial Revolution into the early 20th century.  As Seattle grew, so did its downtown region, including the Fourth Avenue Building, built in 1929 (towards the later states of Seattle's rapid growth).
The 1929 cost of this Art Deco and Celtic designed 15-story building amounted to $1.1 million -- roughly $15.7 million in today's market. Surfaced entirely of stone, it was built in an "L" shape to allow for the greatest space while also offering as many outside-facing offices as possible. It was Seattle's tallest structure with a stone surface.
A few lavish items existed in this building, not atypical for construction before the Great Depression. For instance, brass doors and diamond patterned carved wood indicator panels adorned the elevator, wainscoting and flooring included green marble, and numerous examples of mahogany and polished metal features remain in place as a reminder of the prosperity accompanying the "roaring 20s."
Those occupying the office represent much of Seattle's history. The upper spaces were occupied by investment brokers (a sign of Seattle's boom and promise) and timber industries. Meanwhile, ground floors played host to the Alaska Steamship Company, Southern Pacific Railway, Union Pacific railway, and most significantly, the Northern Pacific Railway, whose ticket offices were also located right across the street, making that spot the city's financial, and certainly its transportation, headquarters.
The Northern Railway proved most prominent in Seattle.  Founded by James Hill, who uniquely refrained from using Federal Grants as most other railways, the most northernmost railway grew to become a "Class 1 transcontinental railroad," enjoying a yearly operating income of more than $1 million as of 1911. The Railway also covered more than 8,300 miles of the United States and parts of Canada.  As a result, James Hill gained the nickname, "Empire Builder." The railway's arrival to Seattle in 1893 was met with great fanfare and enthusiasm. At the time, a railway meant urban viability; a two-day celebration commenced when the first train arrived into town.
All told, the structure holds many stories. It represents Seattle's economic growth, its transition from frontier town to a town with easy access to Yukon and Alaska gold mining, to that of a major shipping and trade center. The architecture and design represent the good economic times of the 1920s, while those who filled the offices denote the important industries of the era.