The President Woodrow Wilson House was the abode that President and Mrs. Edith Wilson called home after his retirement from office in 1921. Wilson was the only president to remain in Washington D.C. after his term until Barack Obama in 2017. While Wilson lived at the house only three years until his passing in 1924, Mrs. Wilson kept residence there until her death in 1961. She donated the entire site and its contents to the National Trust for Historic Preservation as a memorial to her late husband, the 28th President of the United States. The house, built in 1915, was added to the National Register of Historic Places and designated a National Historic Landmark due to its association with the Wilsons.

The Wilsons' house was built in 1915 by local architect Waddy Wood. President Wilson gifted the house to his wife toward the end of his presidency. 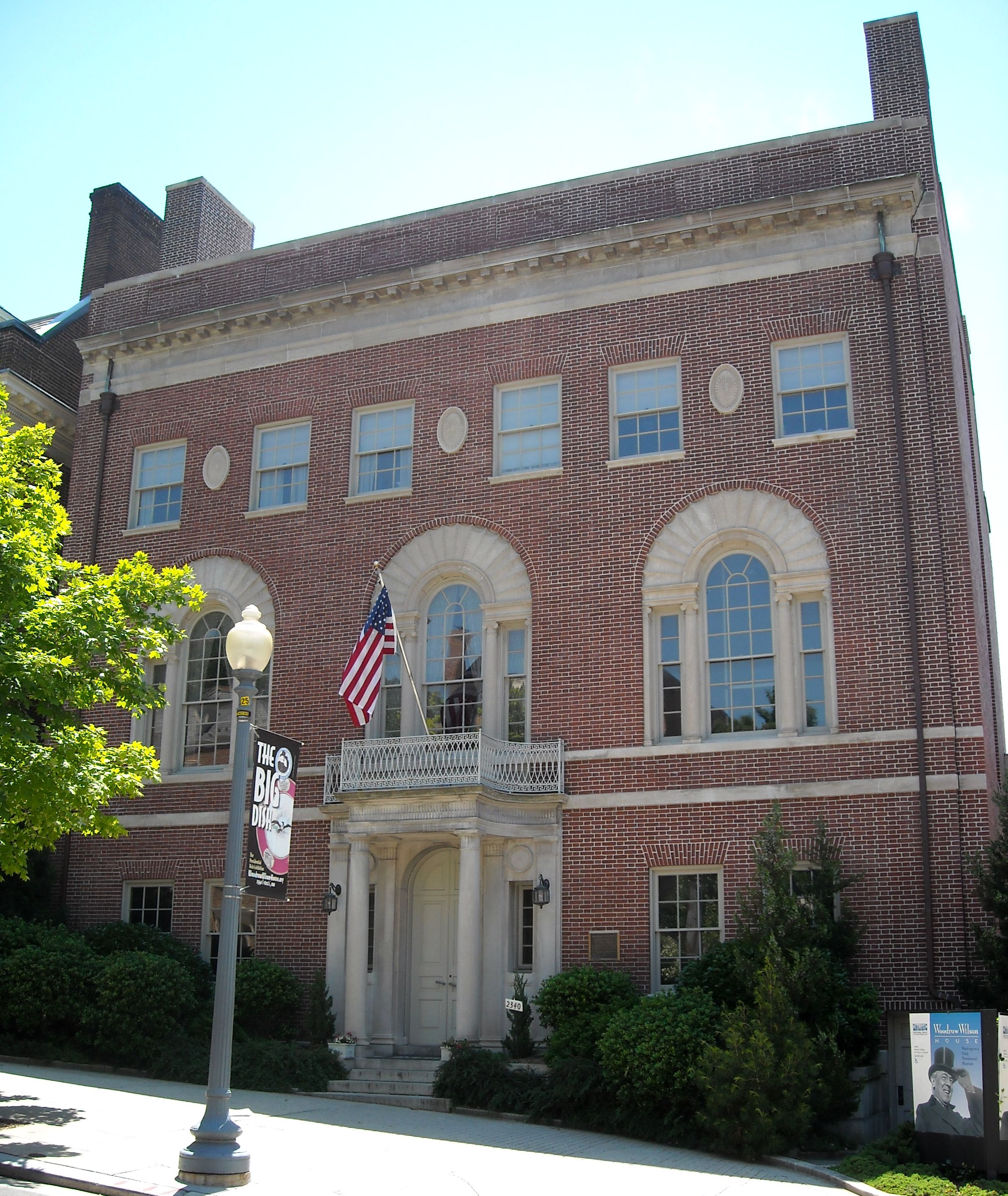 Woodrow Wilson served as president from 1913-1921. He earned a PhD in history and political science from Johns Hopkins. He enacted progressive pieces of legislation during his term and sought peace after World War I. Library of Congress. 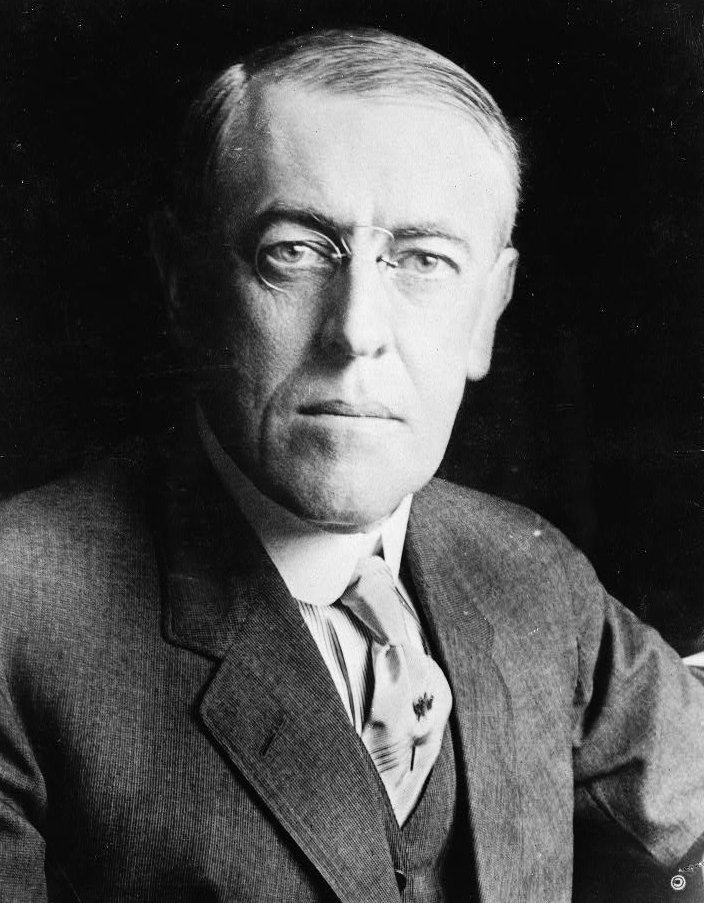 Edith Bolling Wilson married the President during his first term. She served as an important confidant to the President. After he suffered a stroke, Mrs. Wilson managed much of the executive branch. Courtesy of the Library of Congress. 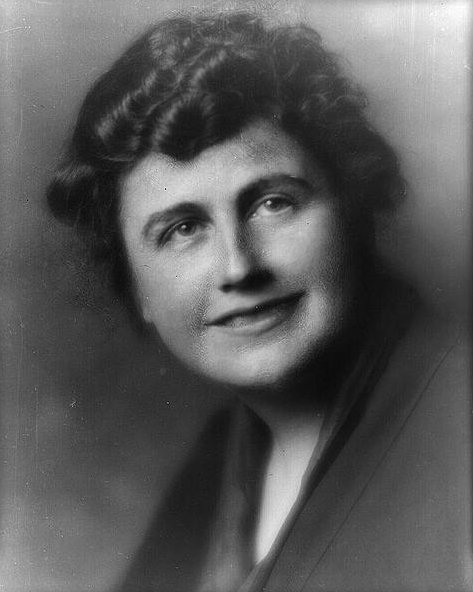 Thomas Woodrow Wilson (in office March 4, 1913 – March 4, 1921) was the 28th President of the United States. A member of the Democratic Party, he is best known as a leading force in the Progressive movement, the creation of the Federal Reserve, and for his efforts to establish the League of Nations during the negotiations that resulted in the Treaty of Versailles at the Paris Peace Conference. Owing to opposition in the Senate, the United States never joined the League of Nations, but the idea of an international organization dedicated to maintaining world peace would carry over into the 1945 establishment of the United Nations.

In the last months of his second term, President Wilson purchased a home in the Kalorama District along Embassy Row and gifted to his second wife, Edith Bolling Wilson. Mrs. Wilson played a significant political role in the White House. She married Wilson after the death of his first wife, Ellen, while in office. Her greatest influence came in 1919, after the President suffered a debilitating stroke that left him partially paralyzed. Mrs. Wilson determined which matters to bring to the President’s bedside and which could be given to other federal authorities. Though they worked to keep the President’s health conditions private, Mrs. Wilson earned nicknames like the "Secret President" and “First woman to run the government.”

The Wilsons moved into their retirement home on March 4, 1921, the inauguration day of the succeeding president, Warren Harding. Upon his retirement, President Wilson remained active in the Washington, D.C. community, opening a law office, giving speeches, attending local theatre, and serving as president of the American Historical Association. He was the only president to remain in Washington D.C. after serving as head of state until Barack Obama chose to stay in the District in 2017.

President Wilson’s health continued to be a struggle. In 1924, he suffered another stroke and died in the residence. He was entombed at the Washington National Cathedral. Mrs. Wilson remained at the house until her death in 1961. She donated the entire site and its contents to the National Trust for Historic Preservation as a memorial to her late husband. The President Woodrow Wilson House opened to the public in 1963.

The design of the estate and grounds was the responsibility of Waddy Butler Wood, who completed his work on the Georgian Revival style house in 1915. Before it was the residence of President Wilson, the property was owned by the executive of Bigelow Carpet Company, Henry Parker Fairbanks. The structure was altered from its original state to accommodate President Wilson's needs after his stroke, which he had suffered in 1919. Additions included an elevator and upstairs balcony to help him avoid stairs, as well as a larger room to house his 8,000-tome library. It was from the balcony of this house that Wilson made his last public appearance in 1923.

The Woodrow Wilson House was designated a National Historic Landmark in 1964. The National Trust for Historic Preservation now owns the house and operates it as a museum. Very little inside or outside the house has been changed since the death of President Wilson in 1924. The structure stands alongside the homes and offices of dignitaries and diplomats from around the world, making it part of "Embassy Row."