Pioneer Cemetery is located on the corner of 9th Street and Viand St (US 62 North) in Point Pleasant, West Virginia. This memorial garden is the final resting place for some of the earliest landowners in Mason County, West Virginia. Among these early settlers buried at Pioneer Cemetery are two veterans of the American Revolution, John Roush and John Michael Roseberry. In 1985, Dr. Jesse Bennett, Surgeon of 2nd WVA Regiment War of 1812, was re-interred at Pioneer Cemetery along with a 14-foot tall gravestone. Dr. Bennett is not only an important Military figure of the time, but is also credited with the first Caesarean section delivery in the United States of America in 1794.

This plaque marks the location for individuals walking along the street and gives a brief description of Dr. Bennett's accomplishments. 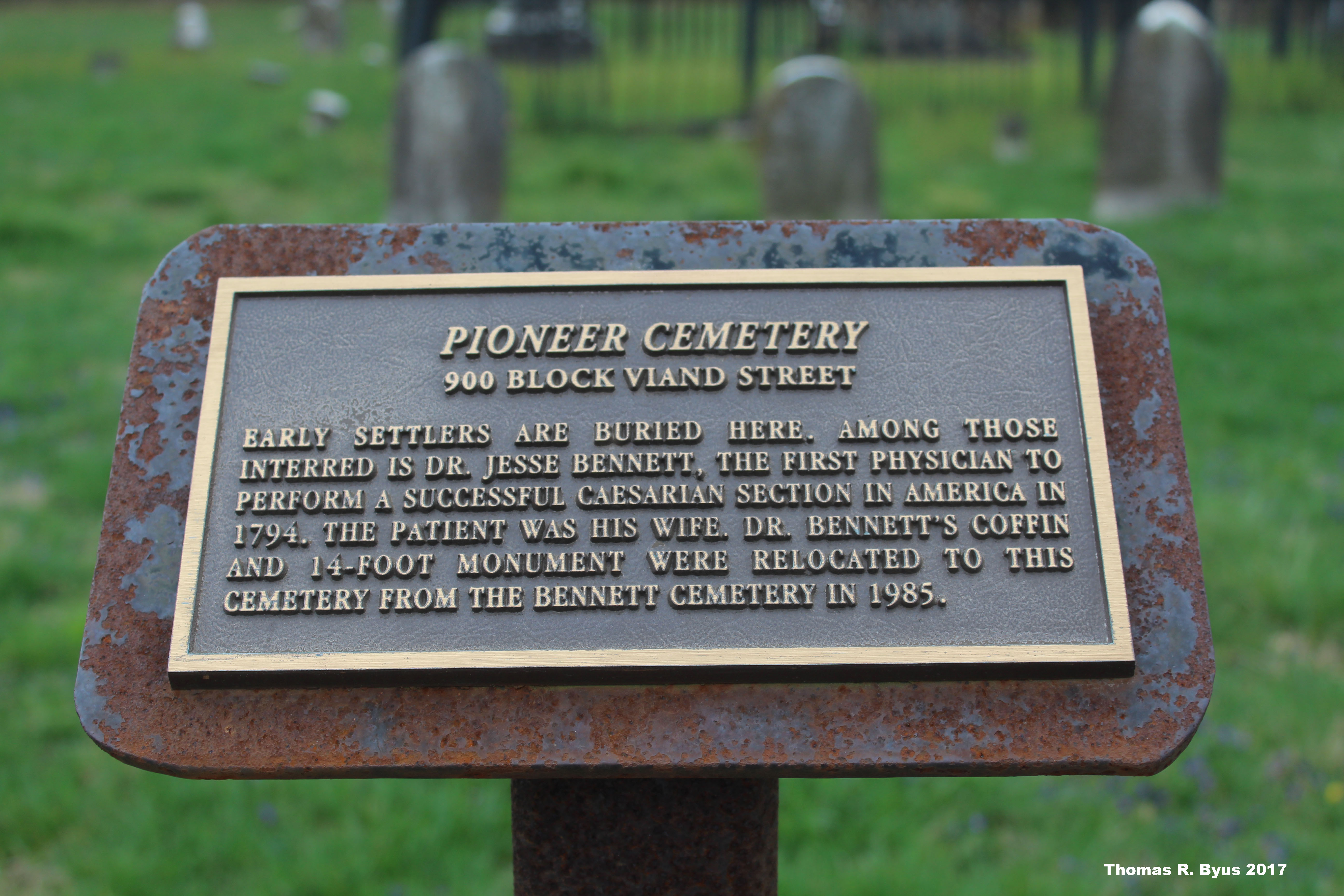 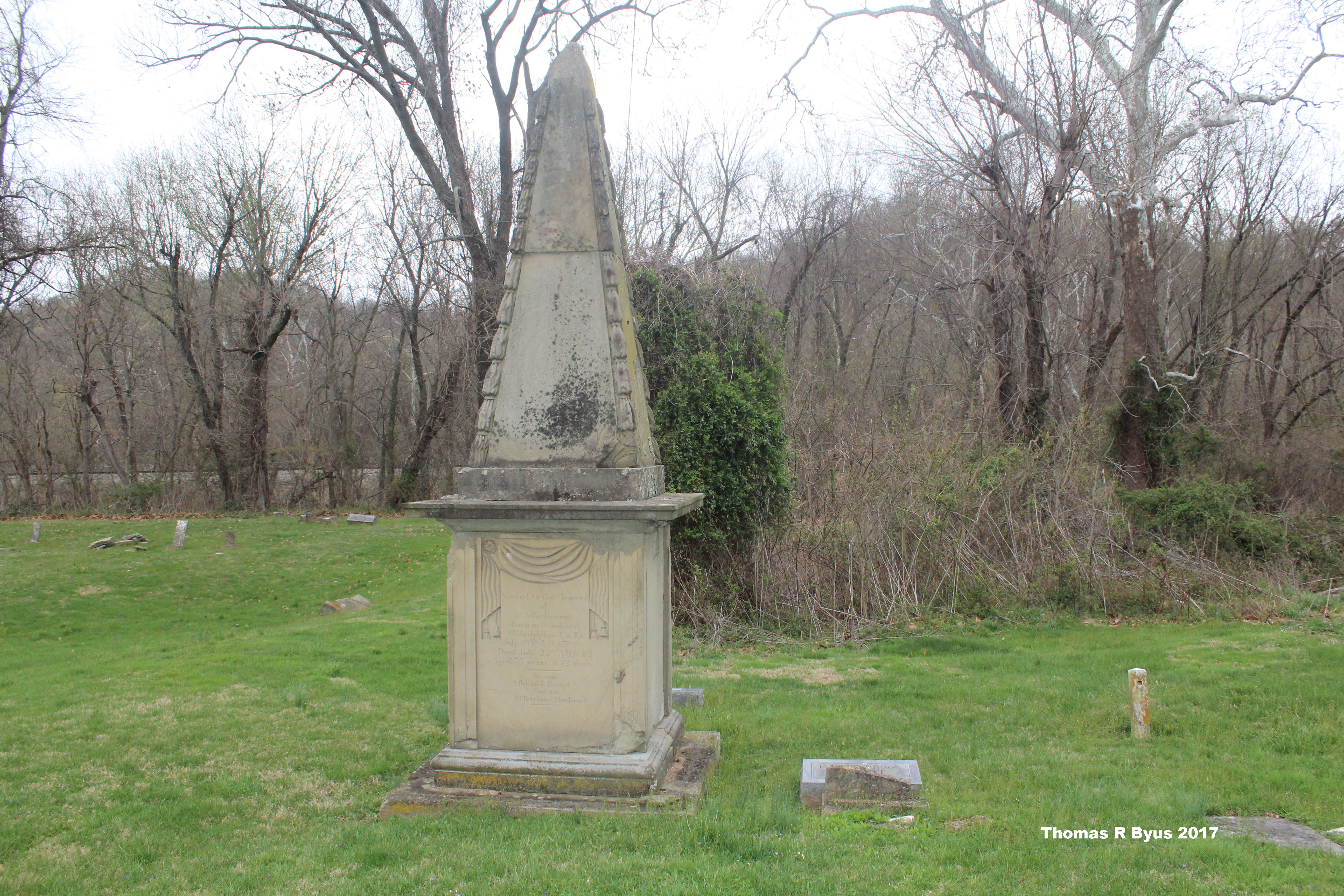 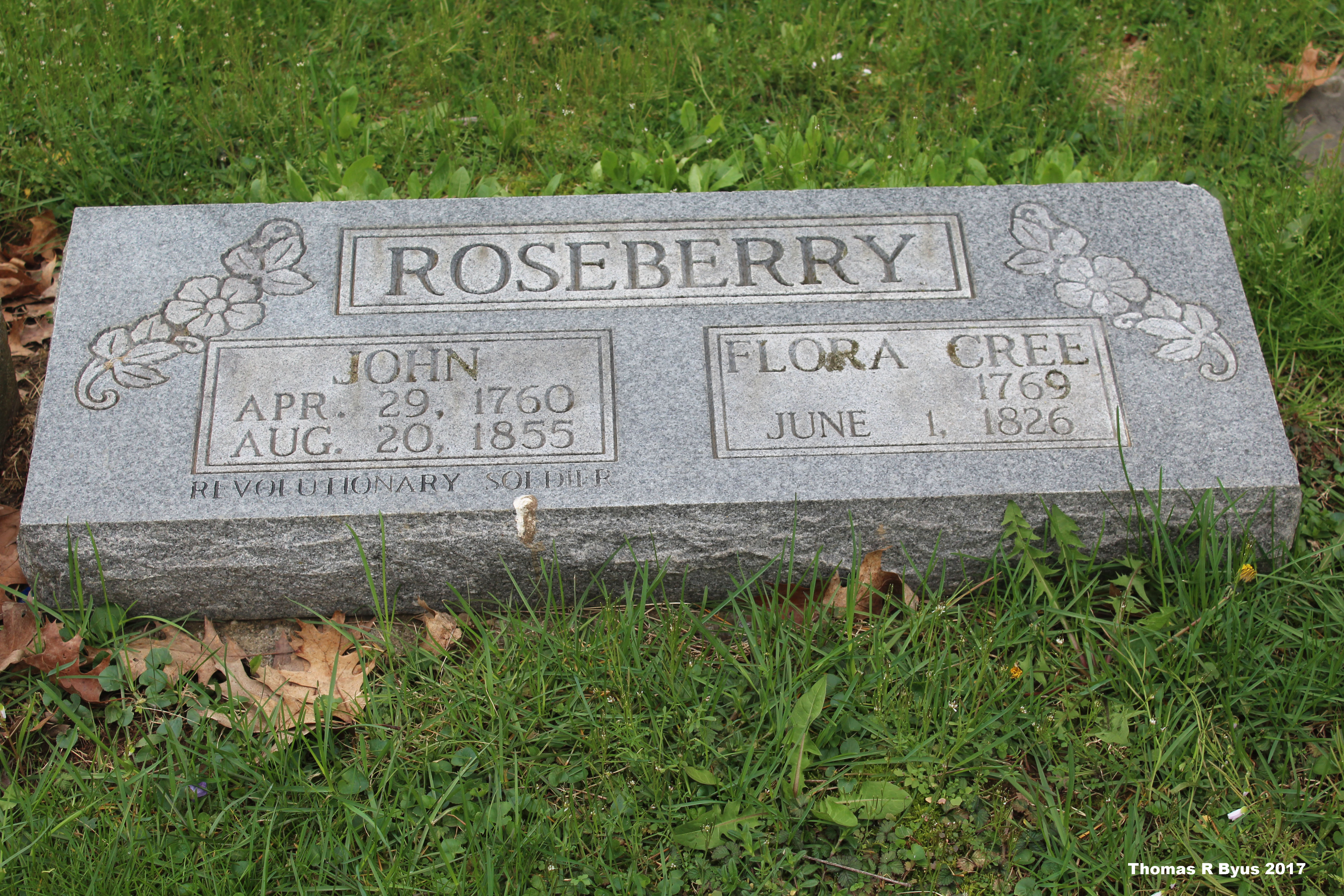 The Daughters of the American Revolution plaque near Roseberry's replaced marker. 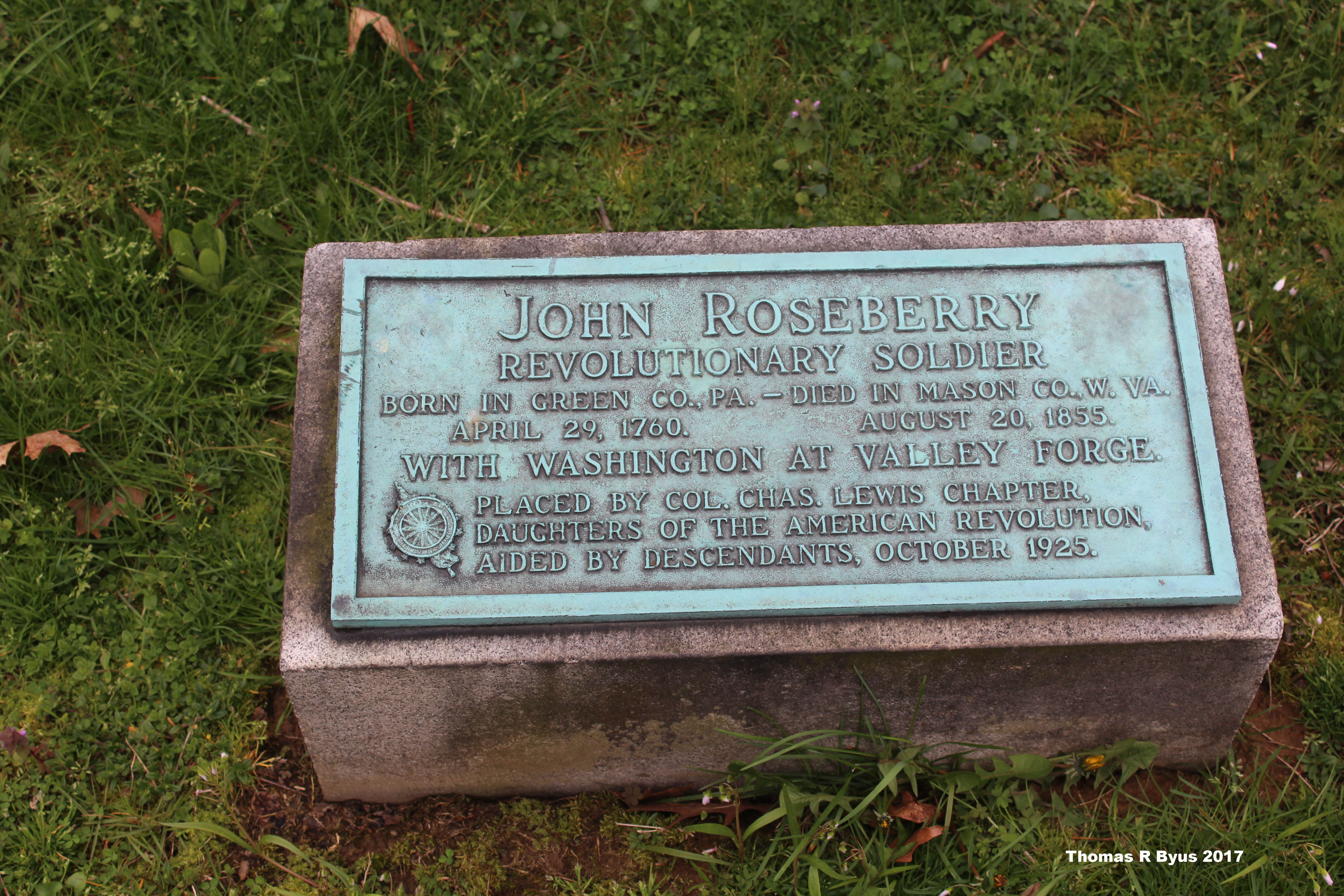 Marker erected by the Daughters of the American Revolution in 1946. 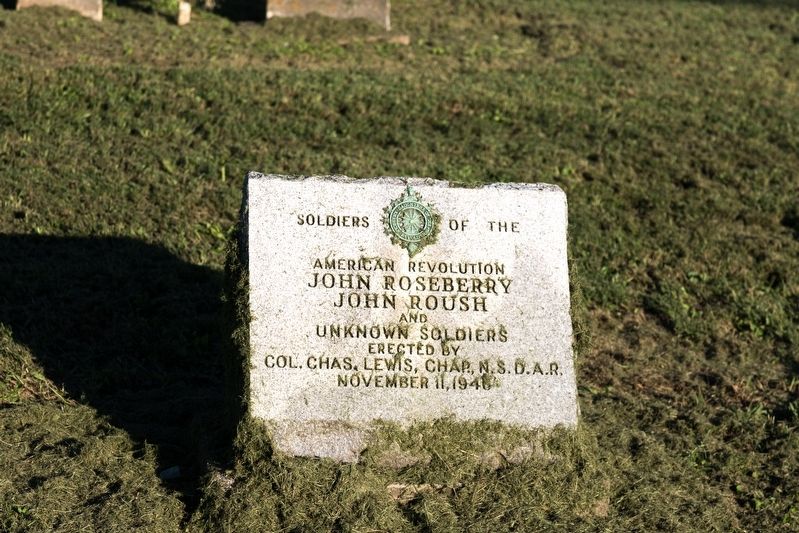 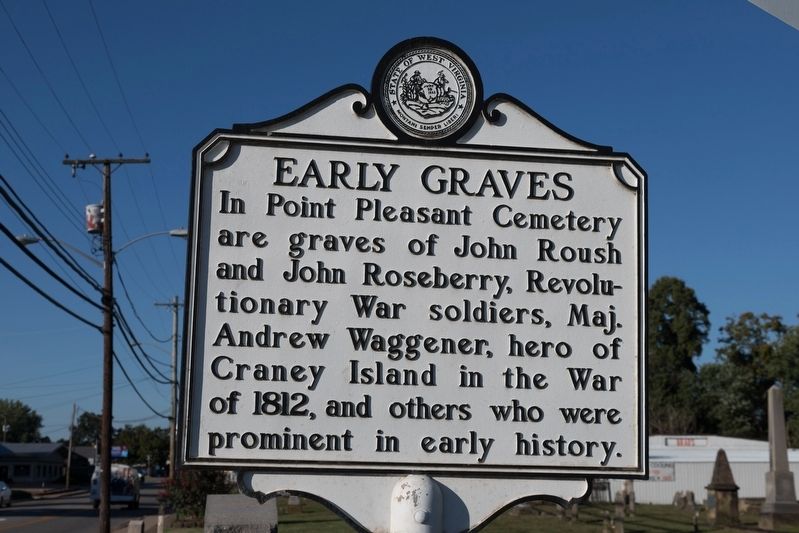 Pioneer Cemetery is often overlooked by many travelers and even residents of Point Pleasant, WV due to its increasingly weathered state. Stones are worn down, broken, and vandalized; however the history behind this cemetery is still relevant. Among the tallest of all the markers is Dr. Jesse Bennett’s 14-foot tall memorial monument. Other burials at this site include two Revolutionary War veterans and numerous early residents of Mason County.

Bennett, born in Frankford, PA, was a dedicated husband and physician. He completed medical school in 1791 and began practicing medicine as an apprentice in Philadelphia, Pa. Three years later, Bennett performed the fist successful Caesarian section delivery in America on his wife and at the time, unborn daughter. Although this was a major medical milestone, Bennett refused to publicize the operation for fear that other professionals would deem him a liar and a fraud. After developing a large medical practice in Mason County, Bennett was appointed as major of the Mason County militia in 1804 and served as a surgeon during the War of 1812. Some years later Aaron Burr, known for his involvement in the Blennerhassett conspiracy, approached Bennett in search of assistance in which he refused.

Revolutionary War veteran John Roseberry, born in 1761, is said to have accompanied George Washington at Valley Forge. Roseberry’s original marker has been lost to the elements, however the Col. Chas. Lewis Chapter of the Daughters of the American Revolution placed a more resilient marker in its place in 1925.

Also laid to rest at Pioneer Cemetery is John Roush. Roush had six brothers and two brothers-in-law that served in the Revolutionary War as well. They are all said to have been buried within ten miles of Roush himself, but evidence for that remains to be discovered. Roush was a Captain in the Shenandoah County Company during the Revolutionary War and later became the first sheriff of Mason County.