The Ard Godfrey House is the oldest wooden-frame house still standing in Minneapolis. Its namesake, Ard Godfrey, built it in 1848 at what is now 2nd and Main streets. Godfrey came to Minneapolis from Maine in 1847 and built a sawmill at St. Anthony Falls. The house became a popular place for locals visitors to gather. Godfrey was a prominent figure in the town, becoming postmaster in 1851. Today, visitors are allowed to see the house during the summer on the weekends. The Minneapolis Park Board owns the house it is and operated by the Women's Club of Minneapolis. Inside the house is furnished with items from the 1849-1853.

Built in 1848, the Ard Godfrey House is the oldest house in the city. Photo: Minneapolis Park and Recreation Board 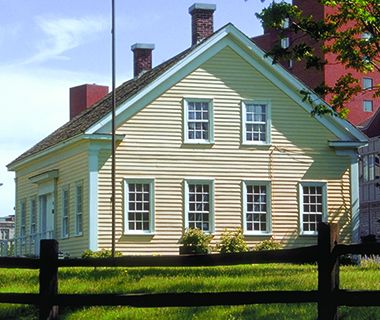 This historical marker is located near the house. Photo: Keith L, via The Historical Marker Database. 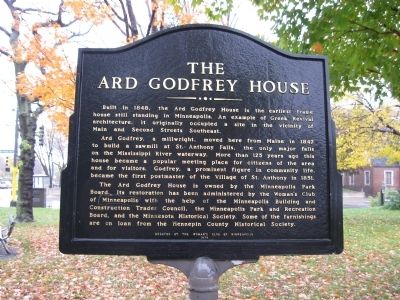 The house was moved several times before finally ending up in its current location in Chute Park in 1907. It was restored and opened as a museum in 1914. The Women's Club began restoring it again in 1975 and opened it again in 1979.