The athletic facilities at the University of Virginia encompass a number of buildings and fields, including Memorial Gym (also known as "Mem Gym"). Mem Gym houses intramural sports in addition to other recreational activities. This structure was designed as a memorial to the 2,700 University students and alumni lost in World War I. Between the gym and Alderman Library is an expanse of grassy turf, once an ice-skating pond, called Nameless Field.

Football and Basketball Facilities at U.Va 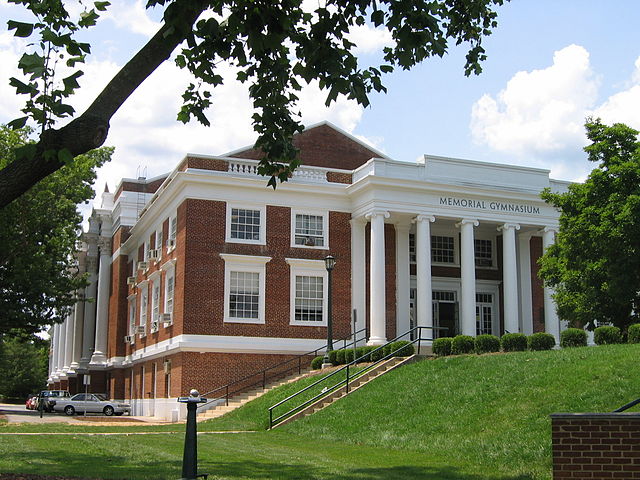 (Ca. 1924) Memorial Gym and the pond that is now Nameless Field 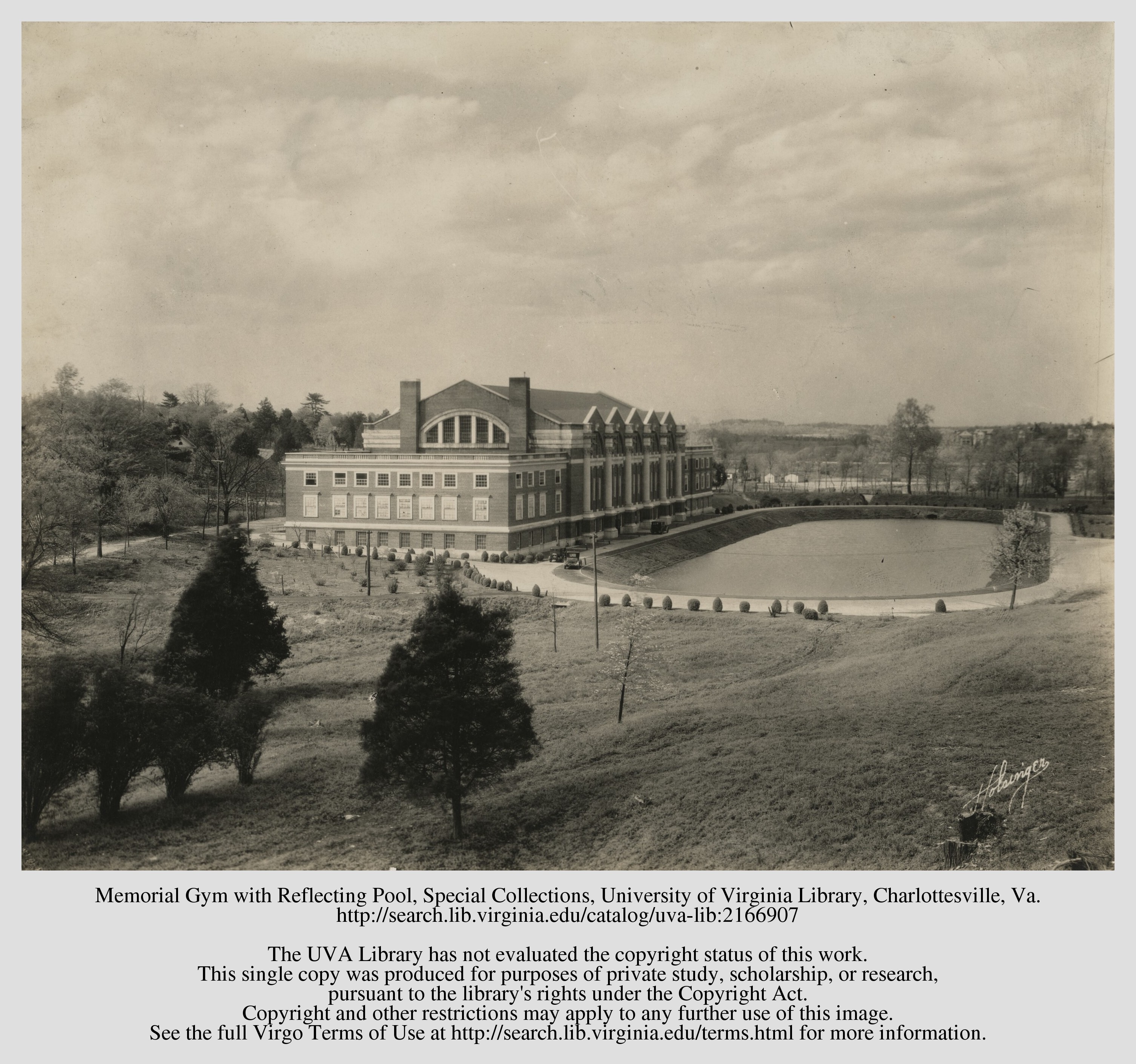 Memorial Gym on the campus of the University of Virginia is a 2,500 seat multi-purpose arena. Designed between 1921 and 1924 by the University's Architectural Commission, under the supervision of Fiske Kimball, the structure commemorates the 2,700 U.Va students and alumni lost during the First World War. The project was funded through a state grant ($50,000), in addition to fundraising efforts by President Alderman ($100,000) and the classes of 1920 and 1921 ($142,000).

At the time of its completion, Memorial Gym was the third-largest gymnasium in the eastern United States. The gym opened in 1924 and was used for a variety of sporting and social activities, such as boxing, concerts, dances, and registration. The basketball program was housed at Mem Gym for 42 seasons until the opening of University Hall in 1965. On June 10, 1940, President Franklin D. Roosevelt delivered his famous "Stab in the Back" speech at Memorial Gym in which he denounced Italy's declaration of war on France. President Roosevelt was in the process of giving a commencement address to graduating students when he was informed of the alliance between Italy and Nazi Germany.

Today, Mem Gym hosts the Cavaliers' wrestling and volleyball teams. It functions as an intramural sports facility and features amenities such as a weight room, boxing practice space, and an indoor wooden jogging track on the second floor. It also once housed a swimming pool, which closed in 2007 upon the construction of the Aquatic and Fitness Center. The pool was converted into an indoor soccer ground.

Adjacent to Memorial Gym is a grassy area known as Nameless Field. This field has its own interesting history. During the summer of 2010, U.Va began construction on two sand volleyball courts east of the Lady Astor Tennis facility (located on Nameless Field). An archaeological excavation of an exposed concrete and stone structure uncovered during the work revealed that the structure was a 19th-Century dam. The dam was built across Meadow Creek in order to form an ice pond. Its use declined following the availability of refrigeration in the early 20th Century, though it continued to be used as an ice skating pond until the early 1920s.

Alternatively known as the "skating pond," "ice pond," "university pond," or "the pond," Nameless Field was once U.Va's largest pond and an "an integral part of the 19th-century landscape of the university."1 The pond, fed by Meadow Creek, is the subject of numerous tales from campus lore. For example, in 1864, Union troops led by General George A. Custer met with University administrators after crossing the creek at the bottom of the pond. Following the construction of Memorial Gym, however, much of the excess dirt was packed into the pond. This process turned the pond into a small reflecting pool. By 1952, effluence from the gym showers and swimming pool had transformed the pond into a polluted, "shrunken mire."2 It was ultimately filled in to serve as a parking lot and athletic field.

The University of Virginia in Charlottesville is a public research university and the flagship school of the Commonwealth of Virginia. Established in 1819 by Thomas Jefferson, U.Va is steeped in history. Its original governing Board of Visitors included a number of founding fathers, such as Thomas Jefferson, James Madison, and James Monroe.Take a walking tour of some of the highlights of the campus, including the Academical Village, a UNESCO World Heritage site.