Sprunt's Champion Compress was the location of a tense showdown in the middle of the violence in the Wilmington Coup d'etat in 1898, as portrayed in Philip Gerard's Novel "Cape Fear Rising." It was a large business occupying significant waterfront property in Wilmington, beginning in 1879. The business employed a large number of Black laborers, and Sprunt made significant efforts to protect them and prevent violence. The property is now owned by Cape Fear Community College 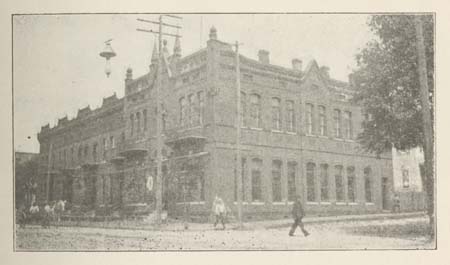 Sprunt’s Champion Cotton Compress was a well-established place of business in Wilmington, working in high volume export of cotton from the major port town.1 James Sprunt, owner of the compress, was an influential and wealthy leader in the community who chose not to engage in the politics of white supremacy. This site was the location of a major standoff between white supremacists and Black laborers during the Wilmington coup d’état of 1898, which was fictionalized in Philip Gerard’s Cape Fear Rising. Gerard utilizes the standoff to demonstrate the heroism of those influential community members who stood up to the toxic white supremacy movement.

The Coup d’état in Wilmington occurred on November 10th, 1898 just following the 1898 elections at the height of the Democratic Party’s white supremacy campaign. The violent riots, perhaps unintended, were largely seen as unavoidable in the toxic class framework of post-reconstruction Wilmington.2 Though the rhetoric and plans of the white supremacy campaign fueled the bloodshed in Wilmington that day, not all prominent white members of the Wilmington community were complicit in the events.

A critical turning point on November 10th was the standoff at Sprunt’s Champion Compress. At the Compress, Sprunt’s hundreds of African American employees were unaware of the events unfolding on the other side of the town. When the fire bells rang out, the employees flooded into the street outside the business. In a state of confusion, many workers were intent on going home to learn more. Sprunt worked to calm the group and keep them on the property in order to protect them. 3

Simultaneously, a group of armed white men heard of a potential gathering of a Black mob. They moved on to Sprunt’s Compress planning to keep the mob under control. With the white men eager for violence, Sprunt was in a difficult position. He was able to negotiate with his workers to send one trusted employee to ensure their homes were safe while the rest of the workers stayed. He further talked down the white agitators and attempted to dissuade them from violence as the crowd slowly dispersed. 4

The importance of the standoff can be understood through its description in Philip Gerard’s Cape Fear Rising. During the tense moments, Sprunt was portrayed as coming out of the office and taking immediate control of the situation in a calm manner. Gerard was sure to emphasize Sprunt’s “level voice” in his first words. Gerard goes further to note that Sprunt had “done his best to stay out of politics: he had work to do, a business to run.” Then, Sprunt was outraged at his clerk’s use of the word “nigger” towards the African American laborers: “Don’t ever use that word again on my time.” 5

Gerard effectively uses Sprunt’s character to show a more compassionate side of Wilmington’s prominent business class. James Sprunt was a wealthy respected businessman. He was an elite member of the community, yet he was willing to stand up to the toxic white supremacy in the town. He clearly cared about his employees, and was deeply opposed to the violence occurring in the town. In some ways, the well documented actions of Sprunt that day make him a hero both historically and in the novel.