Completed in 1932, this federal building housed the United States Customs and Immigration office on the west side of Cherry Street until 1990. In that year, local officials determined that the structure was insufficient and the building was replaced. With the help of several local organizations, this historic building was saved from demolition and the structure was moved to its current location at the cost of $90,000. The building now serves as office space for several area businesses.

Photograph scanned with permission from a private collection- The photograph is facing SW, dated 1 August, 1932, shows the US Border Station from a location in front of the Gillies building. 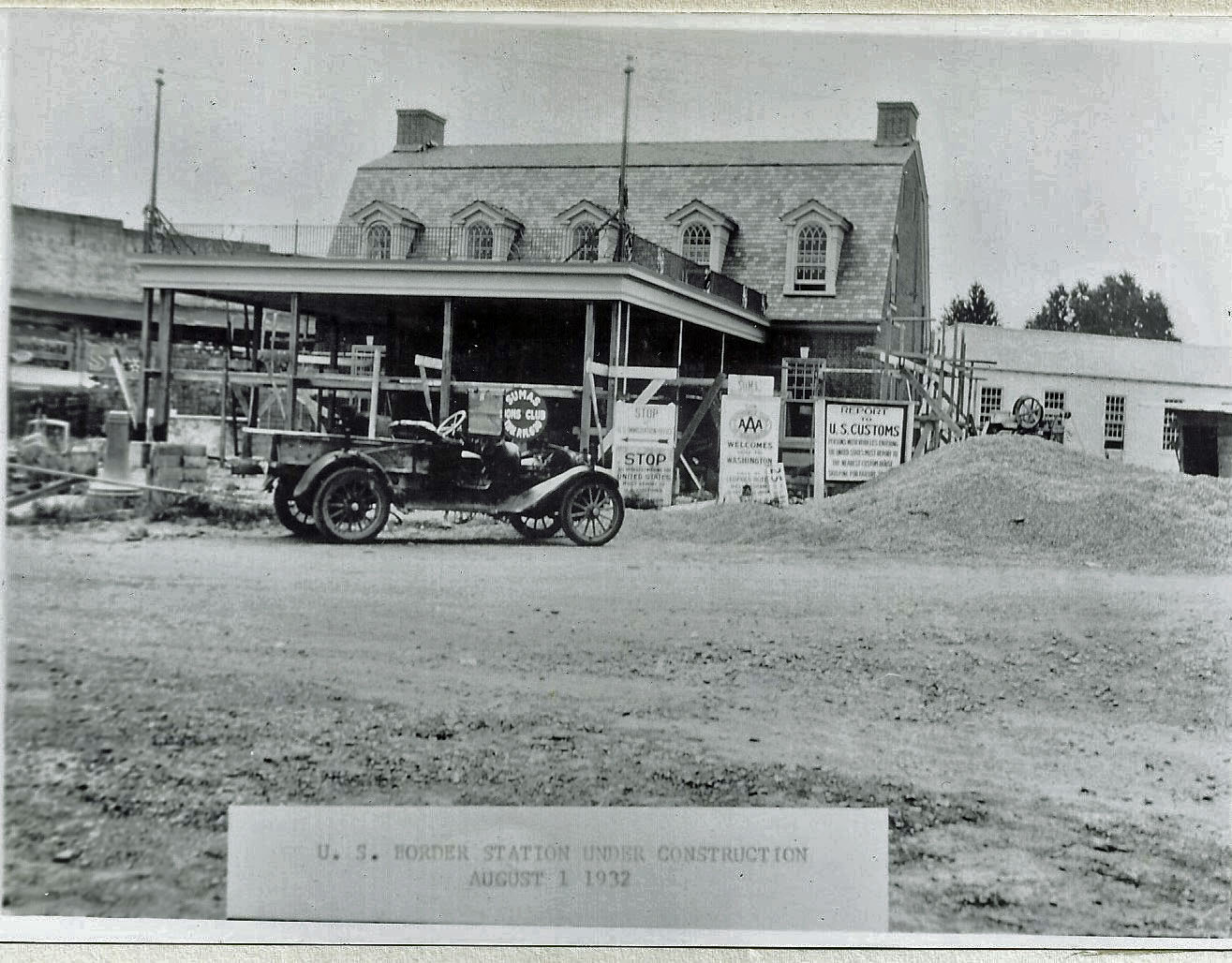 This is a contemporary view of the 3rd Sumas Border Station taken looking northeast. The front entrance faces west and is located 1 1/2 blocks S of the international boundary. Photograph by Deborah G. Morgan, March 23, 2014. 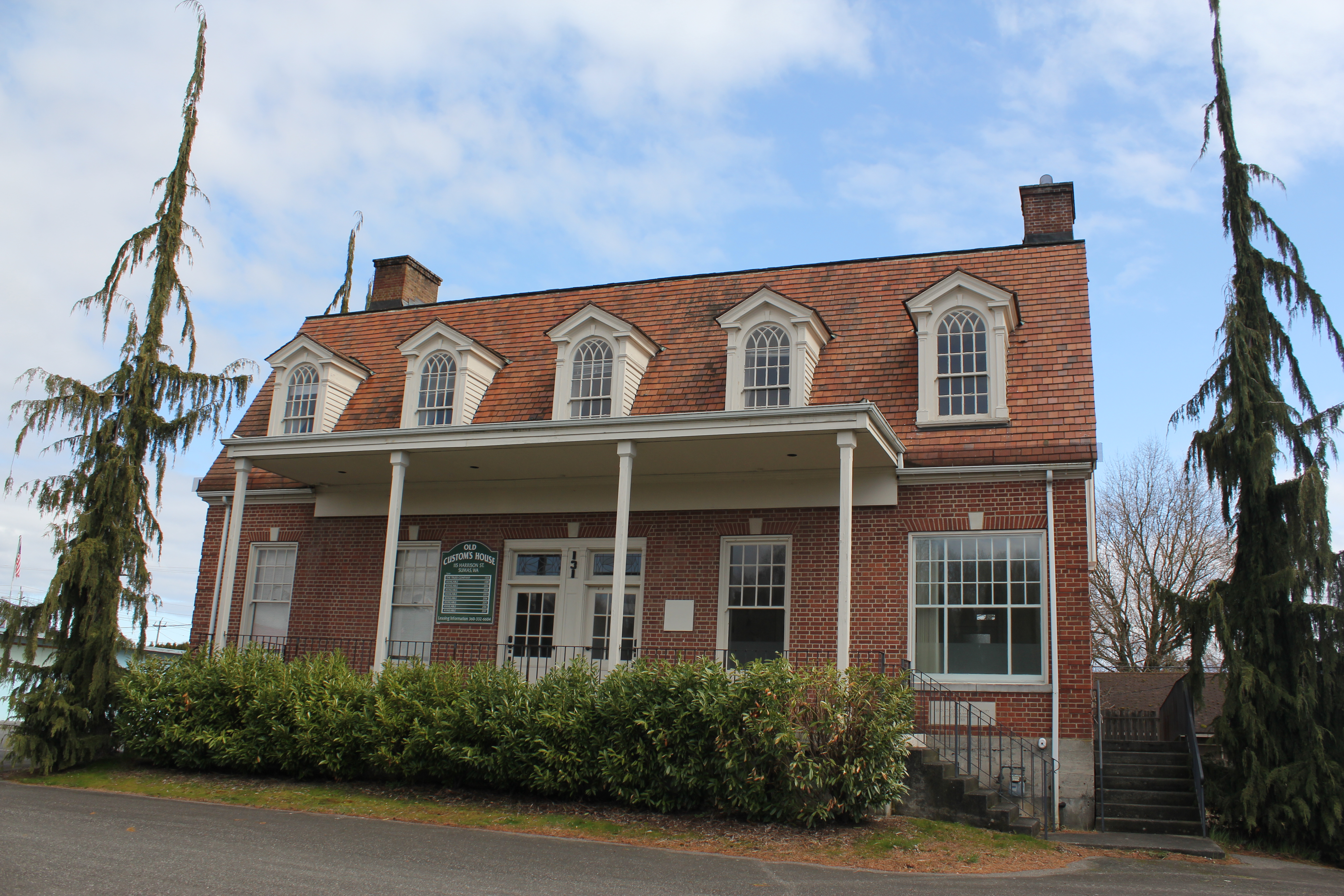 Photograph by Burl B. Beane, November 1990, facing SW on a cloudy (rainy?) day. The southern, wooded slope Moe's Hill is on the right. The new 4th US Border Station is on left, rear. 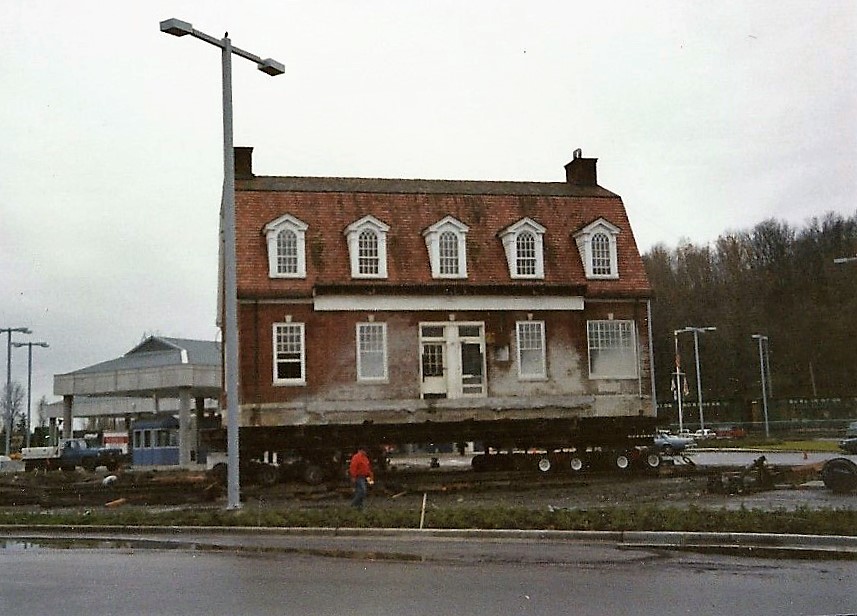 According to the research of the late Burl Brooks Beane, Port Director of Customs:

"Construction was started late in 1931. The excavation produced a nightmare of water and mud, due to the hydrostatic pressure which is common in the area. (Sumas has an unlimited supply of excellent water, from artesian wells.) It was necessary for the builder to add large quantities of reinforcing steel and build on a massive underground slab, rather than normal footings.The station was completed in October of 1932, at what is said to have been a large financial loss to the prime contractor.

Sumas has served another commercial pioneer and while doing so witness interesting changes in construction practices.  A brick company, which is located nearby, in Canada, has developed an impressive variety of building brick, fire brick, and other structural clay products. Numerous designs and sizes of bricks are imported for large building projects on the west coast. Bricks which are as large as building blocks are popular in schools and other public buildings to avoid additional labor costs of laying small types.

Large hollow bricks which are glazed on one side, in pastel colors, have been widely used to provide the normal outer wall and a finished interior wall in one operation. In addition to developing advanced designs, the firm is well known for exacting quality control. The importation of these new commodities have resulted in many classification problems and ruling over the years of their operation.

"January 1988 brought forth rumors of a major change to the scenery at the border crossing at Sumas. It was announced that the grand old Border Station was no longer adequate to house the federal offices. There simply was not enough space to accommodate the growing traffic and activities at the Sumas crossing.  A decision was made to raze the neighboring Maple Leaf Tavern, the Elenbaas Feed Store across the street (which was, from 1914 to 1932, the 2nd Border Station and OK Garage) and Norman Jenson's Broker Office.

The City was given an opportunity to move the 3rd Border Station as it was listed on the Register of Historic Places. The Sumas Border Station (built 1932) was a landmark building in Sumas for many years. This building was witness to many travelers heading to the United States from Canada.

Arthur J. Moe was Deputy Collector In Charge from 1927 until the late 1960s. Burl Brooks Beane replace Arthur Moe as Deputy Collector in Charge starting in 1961. In 1965, the top job title was changed to Port Director. Burl was involved during the Hippie Era and the drug culture which grew from it. When Burl retired in 1976, Daryl Barnes took over as Port Director.

The end of World War 2 brought many changes to the port.The Alaska Highway had been constructed by the U.S. Army and was joined by the John Hart Highway in Northern British Columbia with an improved highway in the Fraser Canyon. This construction provided a direct route between the west coast and Alaska with the Port of Sumas being the logical crossing. "Lynden Transport, a local firm, pioneered a trucking service to Alaska and soon secured contracts which included the U.S. mail"' (pers. comm. B. Beane, 1976).

In June of 1949, the Sumas Border Station which was previously closed daily from midnight to 8 a.m. became a 24-hour port. The construction of Ross Dam between 1937 and 1949 (approximately 60 miles E of Sumas) brought a growth of traffic through the port. Customs Guards were designated Port Patrol Officers in 1947 and given more opportunities for search and seizure. This resulted in a sharp increase in the discovery of both illicit drugs and merchandise.

The 1960s and 1970s brought a large increase of activities to Sumas due to the drug smuggling which was prevalent.  These times brought protests, rock festivals and free spirits. For the Customs and Immigration and officers, this presented a whole new set of challenges.

"The second floor of the Border station used to be the office (for support staff) withholding area (jail cells) first by the U.S. Customs Patrol and then by Customs and Immigration. The basement had a large walk in safe. Outside in the back of the building next to the car impound garage was an incinerator where they burned seized items." (pers.comm. the late H. Stoke retired Sumas Customs Officer)

The original plan was to sell the station for $1 to the city of Sumas and move it to the City Park on Third Street between Cherry Street and Sumas Avenue.  The ground floor was to be turned into the city hall and the library and the top floor would consist of meeting rooms for the City Council. However, the cost for the moving and building conversion was beyond what the city could afford.

A new foundation for the building would cost $90,000 and the federal General Services Administration, who were giving away the building, by law could not spend money on private property, so the plan stalled. The GSA eventually determined that the only option was to tear down the old building which inspired a desperate attempt to save the building.

At that critical moment, a little bird saved the day. The Vaux's Swift is a unique, local little bird that prefers hollow Douglas Fir trees and other forest snags to roost for the night. Unfortunately, much of their habitat has been lost and in response, they seek out shelter in urban brick chimneys. They roost on the vertical rough surfaces of the brickwork. There are not many places available for the little birds and the Sumas old Border Station is one of their sites.There was an outcry from the Audubon Society and then the Sierra Legal Defense Fund stepped in and threatened to sue if GSA continued forwards with the demolition of the old building. There was a lot of support to save the old building and the roosting place for the little birds.

Finally, Clifford Moon, of Moon Construction from Seattle stepped forward and was determined to save the building. He was the lowest bidder for either tearing down the building or moving it. He decided to do the right thing.

According to the Sumas Astonisher:

"The move was of epic proportions! The building was placed on eight dollies front and rear. Each dolly had eight wheels which made a total of 128 tires. The building weighed 714 tons.The power to move the building came from a heavy oil-rig truck which was cabled to the building and its brace trucks via eight pulleys. On the journey to the building's current location, the lead 16 wheels sunk a foot or more into the soft soil at the edge of the road and ruptured the water main to the American Legion Hall. The next morning, the movers, J.W. Dent and Co. of Seattle, saved the day by hydraulically retracting the sunken wheels and placing steel plates underneath, then re-extending the wheels."

Research from the personal collection of the late Burl Brooks Beane, Port Director of Customs.