Named after the Pittsburgh-born, Pulitzer Prize-winning author, historian and lecturer, David McCullough, the former 16th Street Bridge was completed in 1923. It was renamed to honor McCullough in 2013. The McCullough Bridge spans the Allegheny River and connects Pittsburgh’s Strip District with its North Shore. The bridge is a three-span, through arch bridge that was designed by the New York architectural firm of Warren and Wetmore and the lead engineer was Homer Gage Balcom who also designed the Empire State Building. The bridge has been listed on the National Register of Historic Places since 1979.

An overhead shot of the triple-arch McCullough Bridge. Notice the two green and two Black Lentelli sculptures at either end. 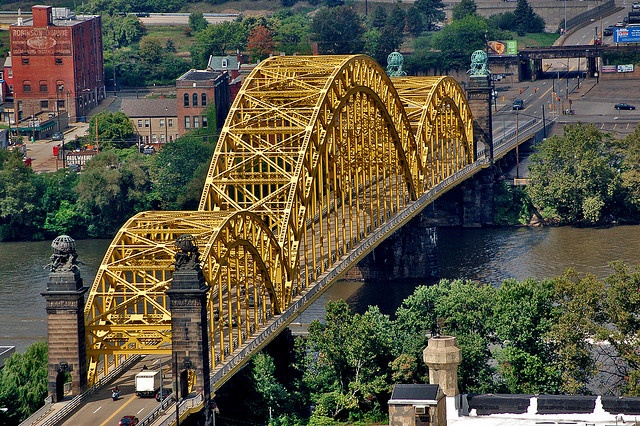 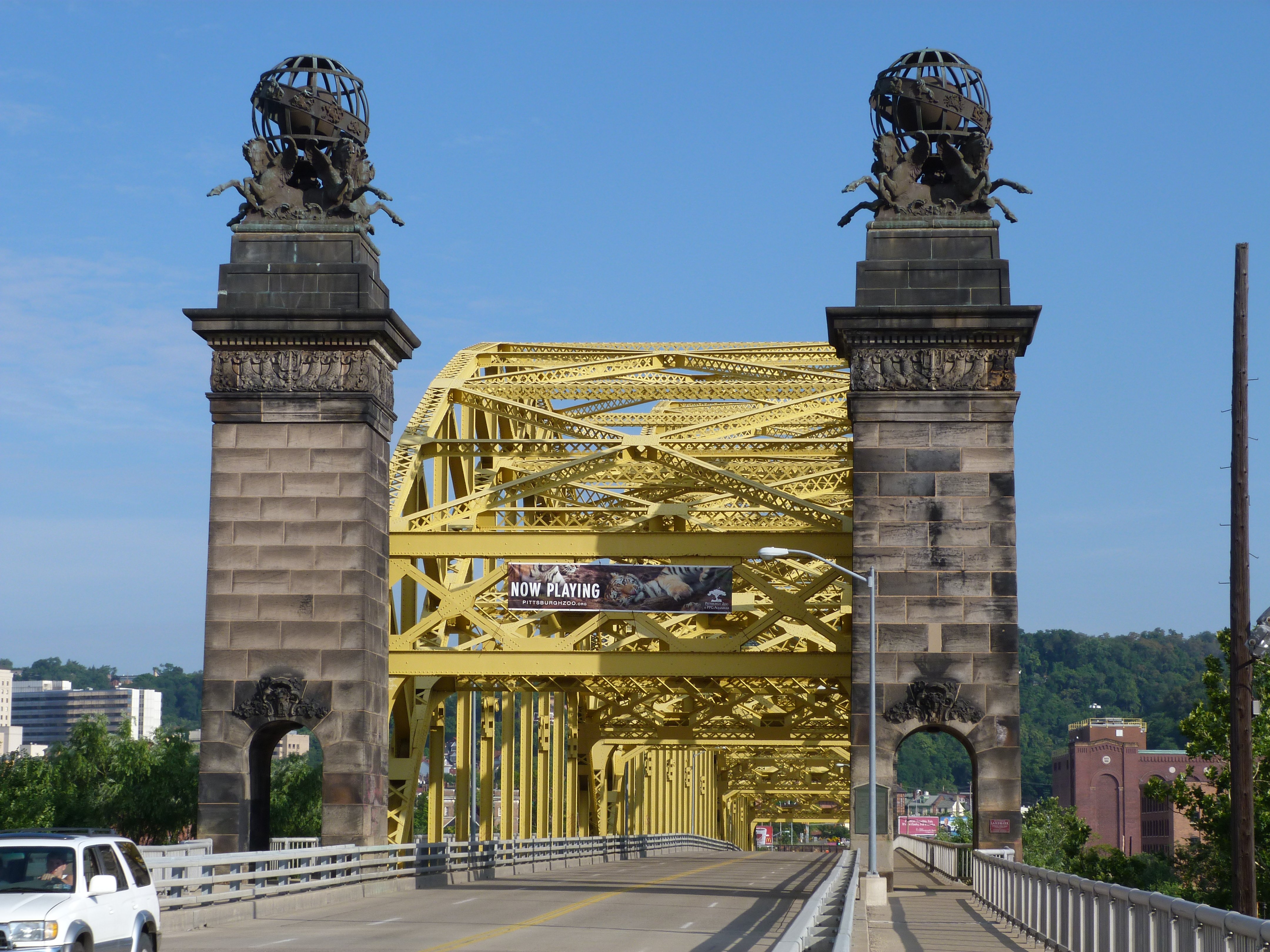 A close-up of one of the four Leo Lentelli sculptures that sit atop each of the bridge's portal towers. 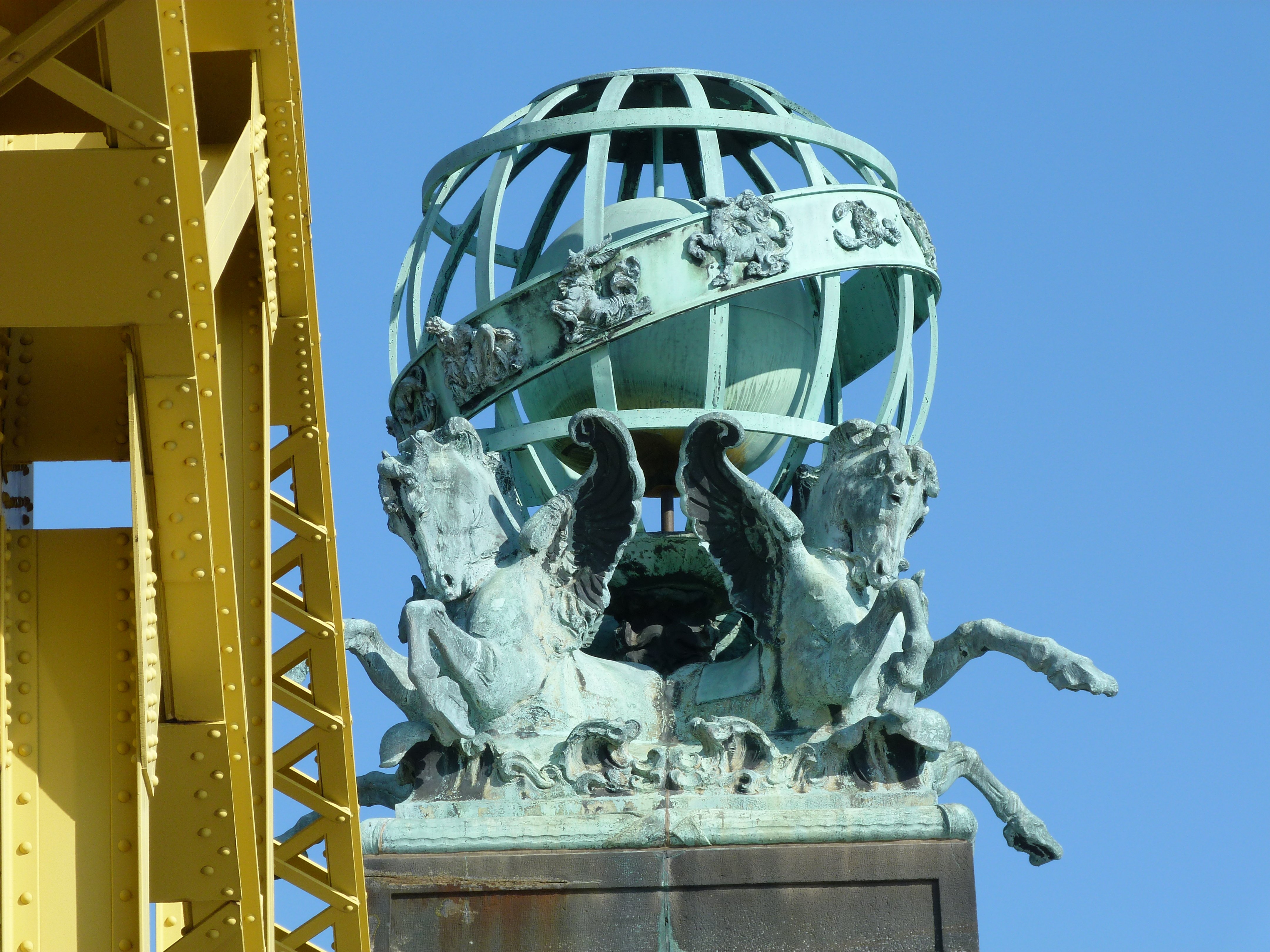 This photo of Pittsburgh's Strip District was taken in 1925 before it became a fashionable neighborhood. The McCullough Bridge, then known as the 16th Street Bridge, can be seen in the background. 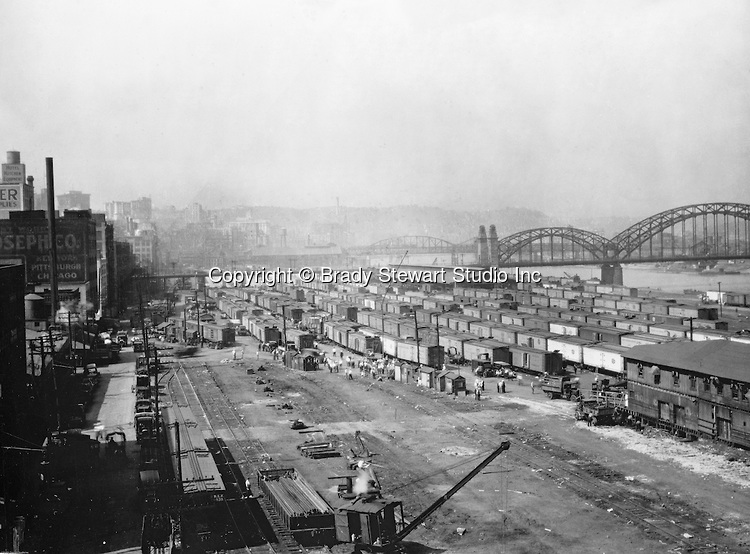 A close-up of one of the stone sculptures that resides above each of the pedestrian archways. 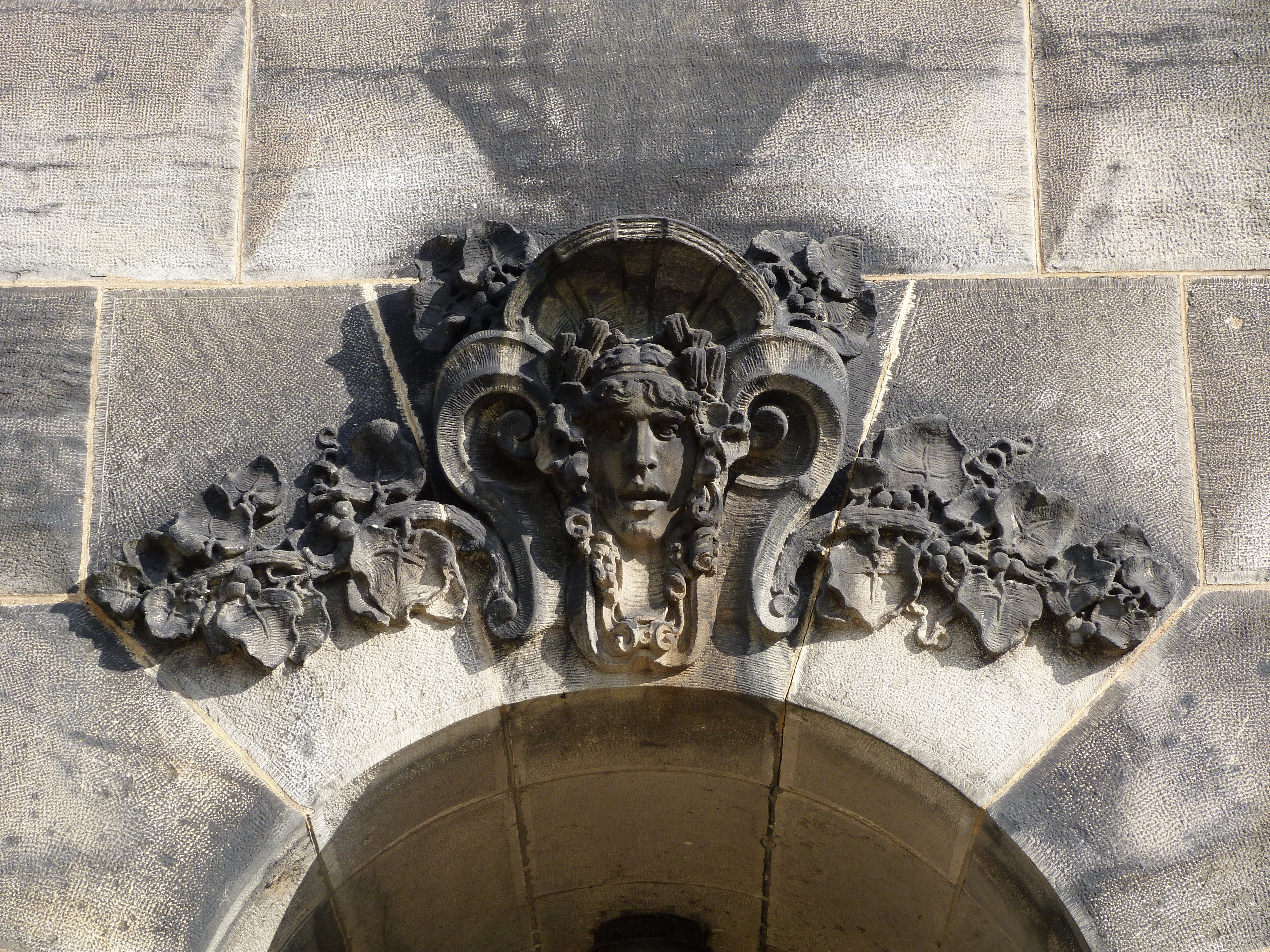 The first bridge on the site was the Mechanics Bridge, which was a covered, wooden structure that was completed in 1837 and was destroyed by fire in 1851.  An open bridge was then built on the existing piers in 1854 for pedestrians and horse-drawn vehicles.  This span was partially destroyed by a flood in 1865 and rebuilt as a toll bridge.  Allegheny County later purchased the bridge in 1911 and eliminated the toll.  However, this bridge was also destroyed by fire in 1918.

The city then contracted with Warren and Wetmore in order to design a new bridge in conjunction with the Pittsburgh Art Commission.  The city sought a bridge that was “…beautiful as well as ornamental.” In other words, the city was of the belief that form and function should receive equal attention.  To that end, the architectural firm, using the old piers, created a through-arch bridge that utilized a Warren truss design on its three arches.  The bridge is 1,900 feet long, with its main span measuring 437 feet.

They also designed four massive stone towers, two at each end, that serve as portals and soar 62 feet above the bridge deck.  Pedestrians crossing the span walk through arched openings in each tower that include carvings of what are thought to be Poseidon (or perhaps Neptune) and his wife.   Atop each tower is a bronze sculpture designed by Italian-born sculptor, Leo Lentelli.  Each sculpture features four winged seahorses (more Pegasus-like than an actual seahorse) and an armillary sphere encircled by the signs of the zodiac.  Two of the sculptures still retain their oxidized green coloring while two became Black in color after the oxidization had been removed and they were coated with lacquer in 1978.

The bridge underwent extensive renovations when it was closed for six months in 1981 when a new deck and expansion dams were installed.  It was then closed for a year in 2002-2003 when it underwent a $9.8 million overhaul.  The renovations included the replacement or repair of much of its structural steel, abrasive blasting, and a new, yellow coat of paint.  In July of 2013, on David McCullough’s 80th birthday, the bridge was renamed to honor the man who was born and raised in the Point Breeze neighborhood of Pittsburgh.  The Yale graduate has written such works as The Johnstown Flood in 1968 and The Great Bridge, about the design and construction of the Brooklyn Bridge, in 1972.  He won the Pulitzer Prize for both Truman and John Adams.