View of the Road side pull off. 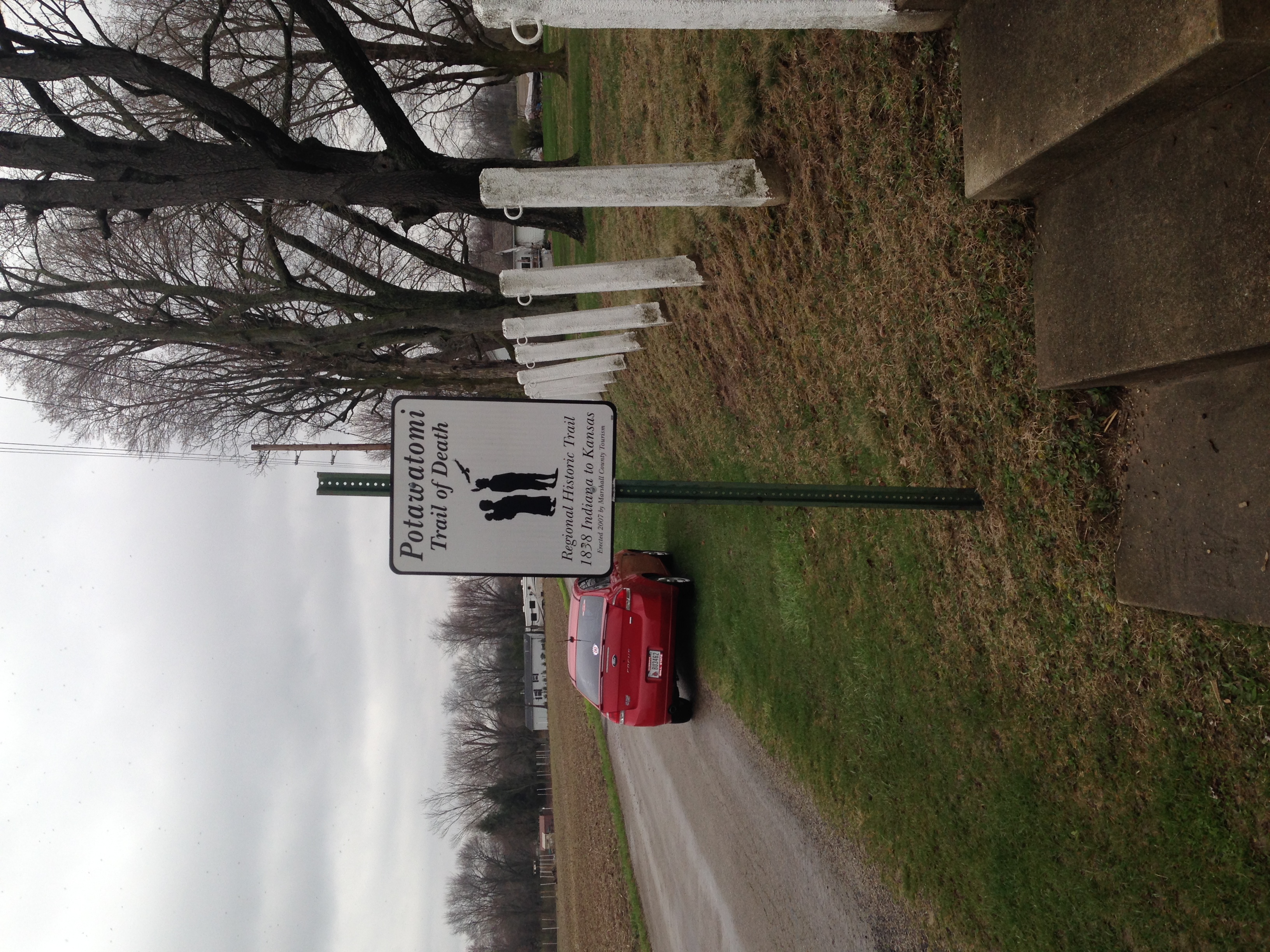 This stone plaque provides a map which overviews the Trail of Death from start to end. 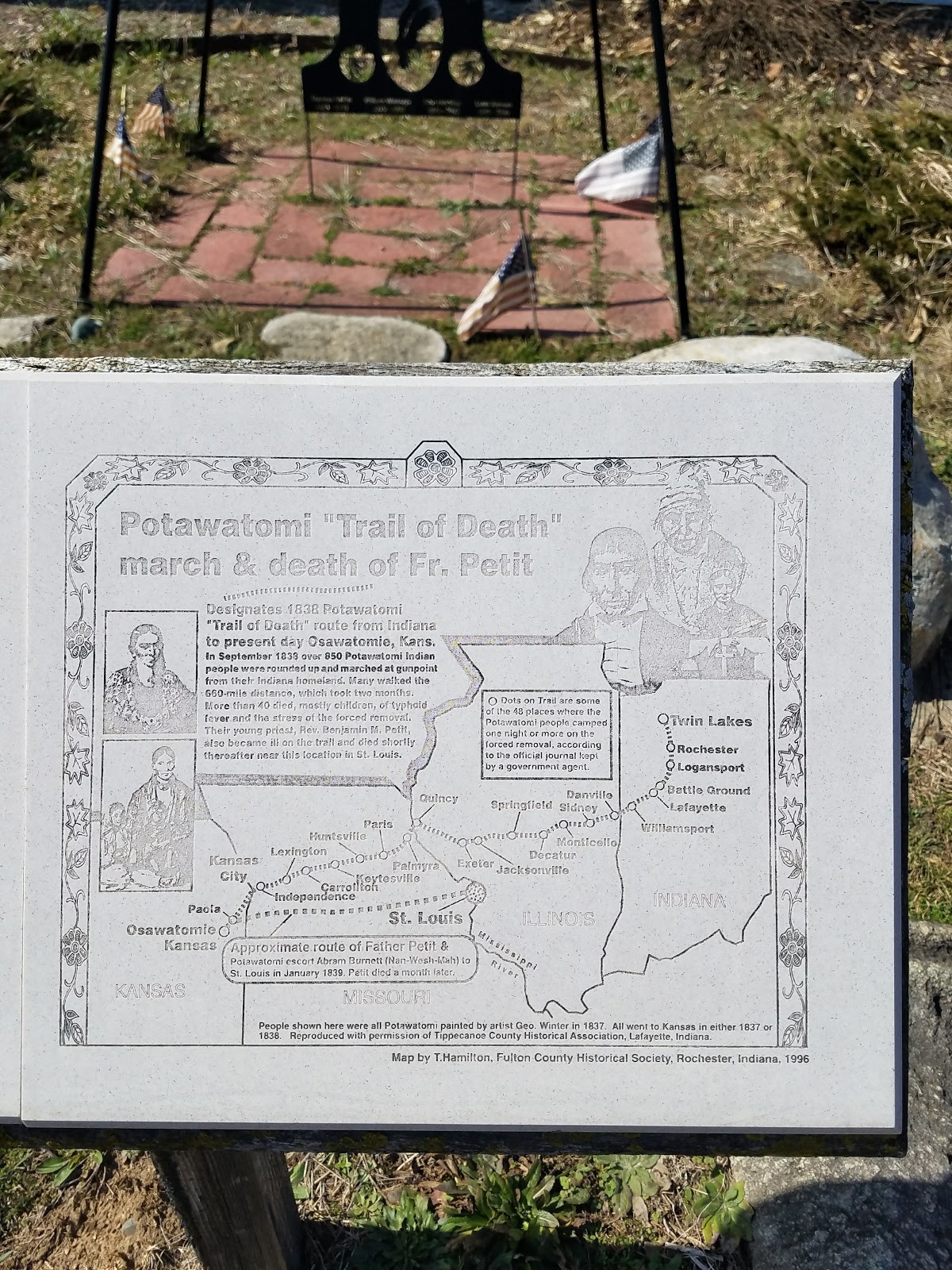 A plaque that memorializes Chief Menominee and the 859 Potawatomi people removed from their homeland. 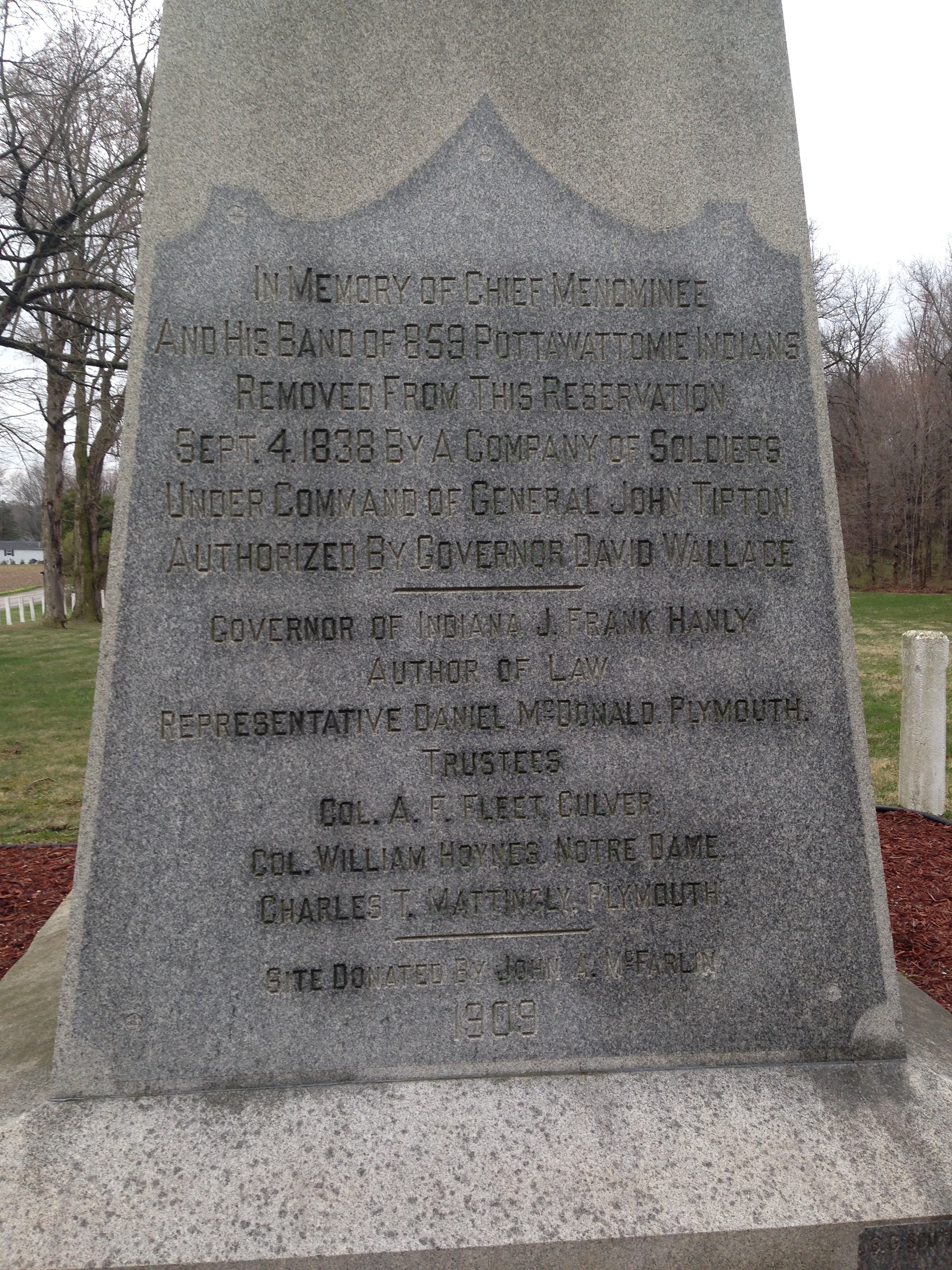 The statue of Chief Menominee at Twin Lakes, IN 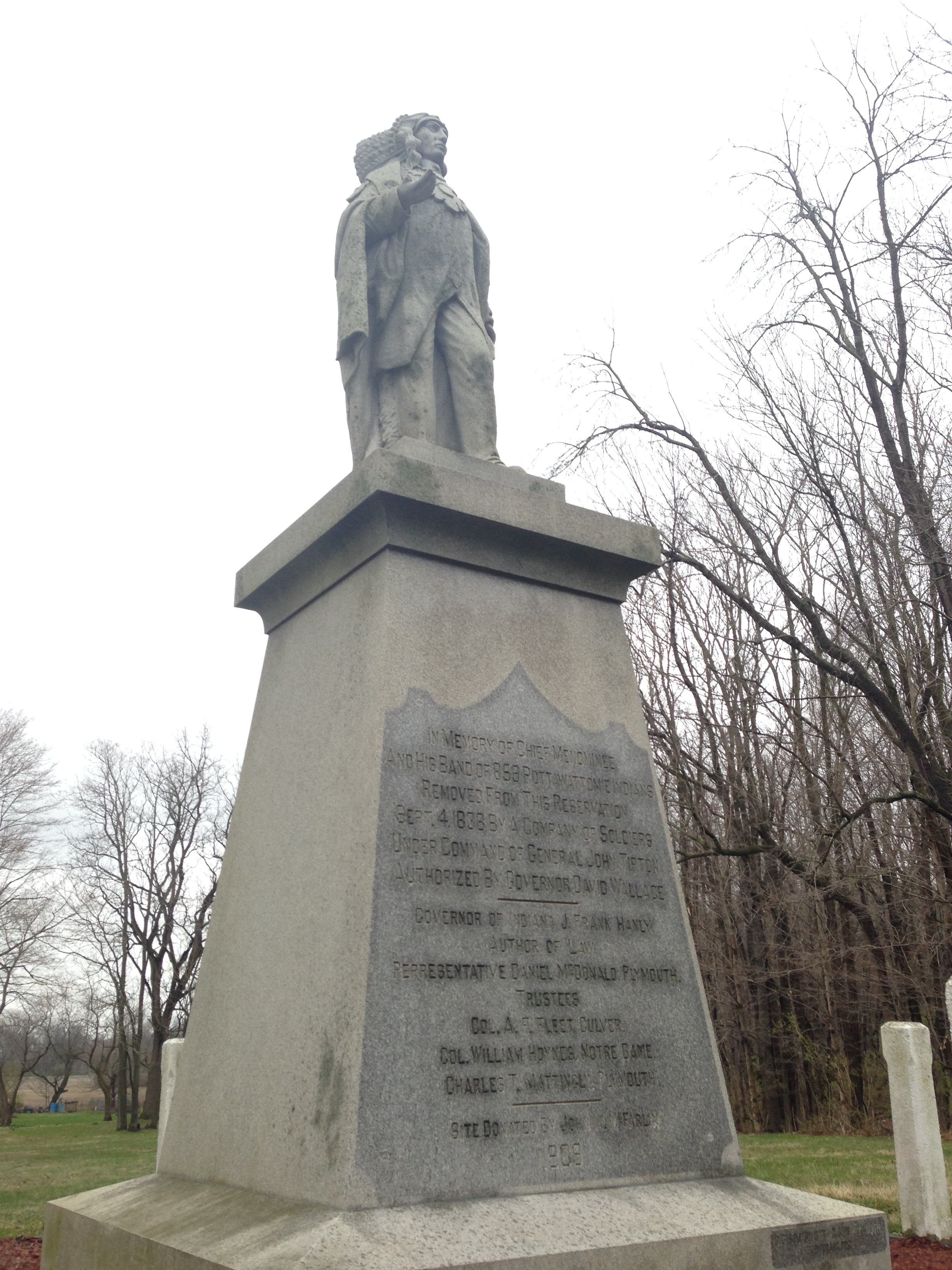 Who was Chief Menominee?

Menominee was born around 1790 in either Indiana or Wisconsin. While later in his life he was a chief among the Potawatomi, he was not Potawatomi by birth. Given his possible origin from Wisconsin, he could have been Ojibwe.1 His status as chief was achieved in his adult life, due to the respect he drew from the Potawatomi he lived with. Menominee signed four treaties during his lifetime, the first at age 28, it was possibly actions like these that bolstered his status. More importantly, Menominee was recognized as an important spiritual leader/preacher among the Potawatomi. He was tutored under Reverend Isaac McCoy in Ft. Wayne, Indiana to become a preacher. Among Native Americans he preached against drunkenness, theft, murder, and many other sinful behaviors. It seems that Menominee did not completely convert to an American Christian worldview or give up his Traditional beliefs, but rather his preaching and spiritual practices represent a hybrid sort of belief system, or at least Christian beliefs in a traditional Potawatomi context.1

In order to have a stronger spiritual presence in his community, Menominee petitioned the Black Robes to have Catholic Father live among them. The Black Robes were a group of Catholic missionaries who had had a connection with the Potawatomi since the Fur Trade era. Menominee’s petition was granted and a Catholic mission was established at the Twin Lakes community. In 1835 a log chapel was erected, and at the time of the removal, Father Petit was the Catholic priest among them.1 Father Petit also kept a detailed journal as he traveled with the Potawatomi along the trail of Death. In the Fall of 1838, the Potawatomi at Twin Lakes were rounded up and forcibly marched to the West.2 Menominee and two other men recognized as chiefs were put in a prison wagon. Chief Menominee survived the Trail of Death, and lived out the rest of his life in St. Mary's Mission at Sugar Creek in Linn County, Kansas, south of Osawatomie. However, he died a few years later in 1841.1

The Trail of Death

What was the Trail of Death, and more importantly, why did it happen? This instance of forced removal is a not unique event of this time period. Other groups like the Cherokee were also removed on forced marches, such as the Trail of Tears. Eastern Woodlands Indians occupied land on which Euro-American farmers desired for agriculture. This, combined with political motivations and prejudice, was cause enough for the Potawatomi Indians to be marched west of the Mississippi River to the Kansas territory. Their land was desired for agriculture and development. An Indian agent named Abel C. Pepper was tasked with using any means possible to get the Potawatomi at Twin Lakes to sign a treaty and have them removed westward in two years.3 Bribery was often used as a means to get Potawatomi to put their x mark on the treaty. Menominee never signed this treaty, as he did not want to lose the Potawatomi land to greedy people.1 Menominee even tried to gain the support of the President to let him remain on their lands. But this was unsuccessful. After false reports of conflict between white settlers and Potawatomi in the area, the Governor of Indiana commanded General John Tipton to remove this group of Potawatomi to the West. In the Fall of 1838 Tipton and a group of volunteer militiamen rounded up the Twin Lakes Potawatomi and begun their removal.3 This group made stops in, Rochester, Logansport, Battle Ground, Lafayette, and Williamsport in Indiana along their route to Eastern Kansas. On November 4th, 1838 the Potawatomi had reached the end of their 660 mile exile. Along the way over 40 of them had died, and around 100 had escaped and made their way back to Indiana. The muster roll kept by General Tipton indicates that 859 Potawatomi started from Twin Lakes, and the total at the end was 756.1

Memorials of the Past, Potawatomi of the Present

While it is important to remember historical Native American figures, like Menominee, stone statues do somewhat of a disservice to them. Menominee is portrayed on this statue as a very stereotypical Indian with a feather headdress. His type of headgear was mostly used by groups in the American Plains. Stone memorials also tend to metaphorically trap people like Native Americans in the past. It is common for people to look at these memorials and think of people like the Potawatomi as being figures that only exist in the past. However, Native Americans like the Potawatomi have actively existed from the past to the present, being involved in all the historical periods up to now. The Potawatomi Nation is active today and has groups living in Chicago, northern Indiana, Kansas, and western Michigan. Every year descendants of those who marched the Trail of Death and other Potawatomi retrace the trail to commemorate the dead and those who survived this exile.