Latvia initially declared independence on November 18, 1918; however, the country was included in the USSR's Sphere of Influence. Because of this, it was occupied by Soviet troops until Latvia, again, declared independence in August, 1991. Since regaining independence, Latvian-American relations have steadily increased to include political, economic, trade, and cultural relations. In 2004, Latvia joined NATO, which strengthened the relations between the two countries even more.

Before acquired by the Latvian government in 2001, the building was the home and studio of painter Alice Pike Barney. 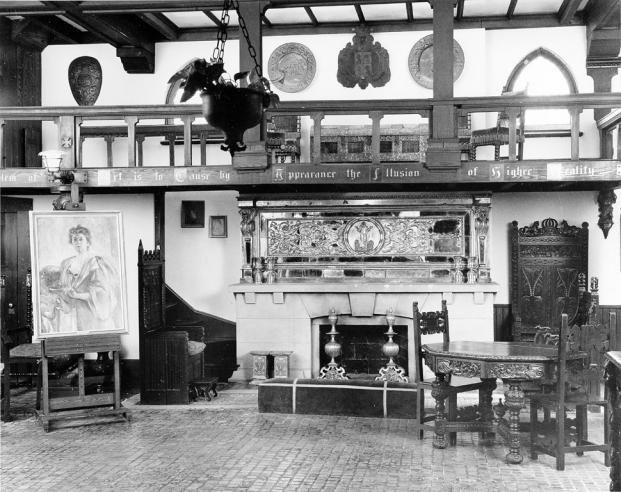 In 1976, the children of Alice Pike Barney donated the house to the Smithsonian American Art Museum, then called National Museum of American Art. 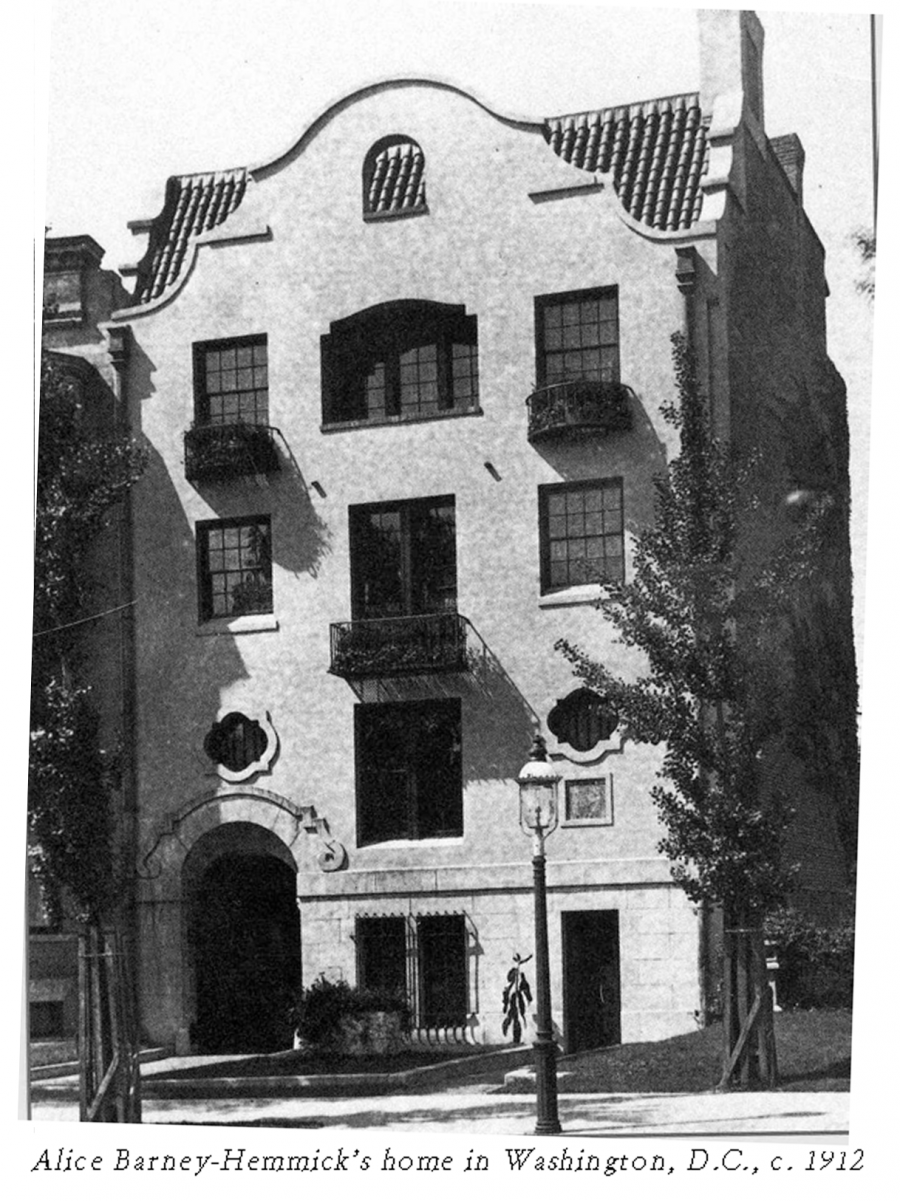 The Latvian chancery is a fine example of Spanish Colonial Revival architecture on Embassy Row, noted by its rounded features and masonry construction. 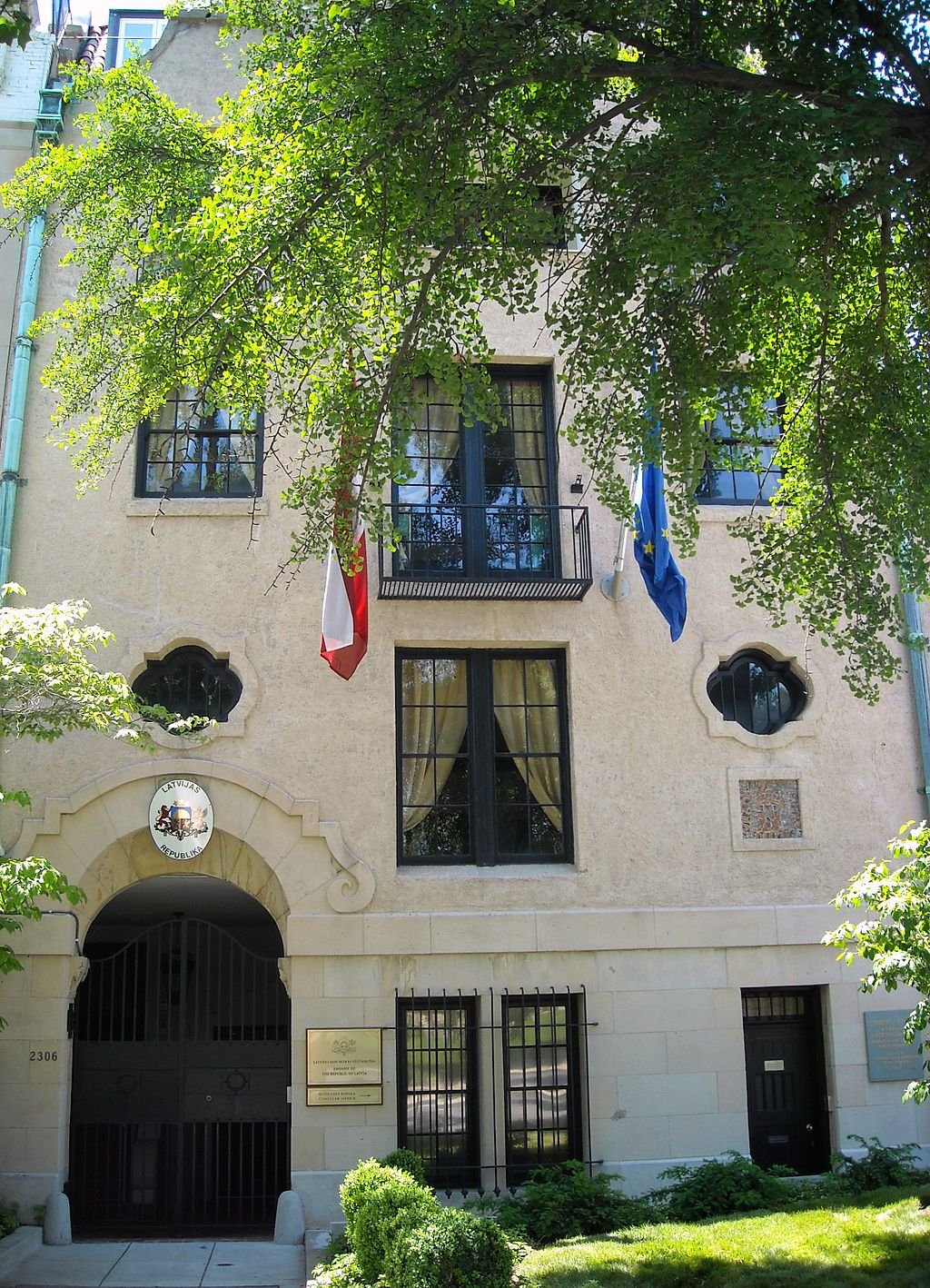 This flag was adopted after Latvia declared independence from Russia. Under Soviet rule between 1940-1990, Latvia flew a Soviet flag. Its historic design flew once again after independence in 1990. 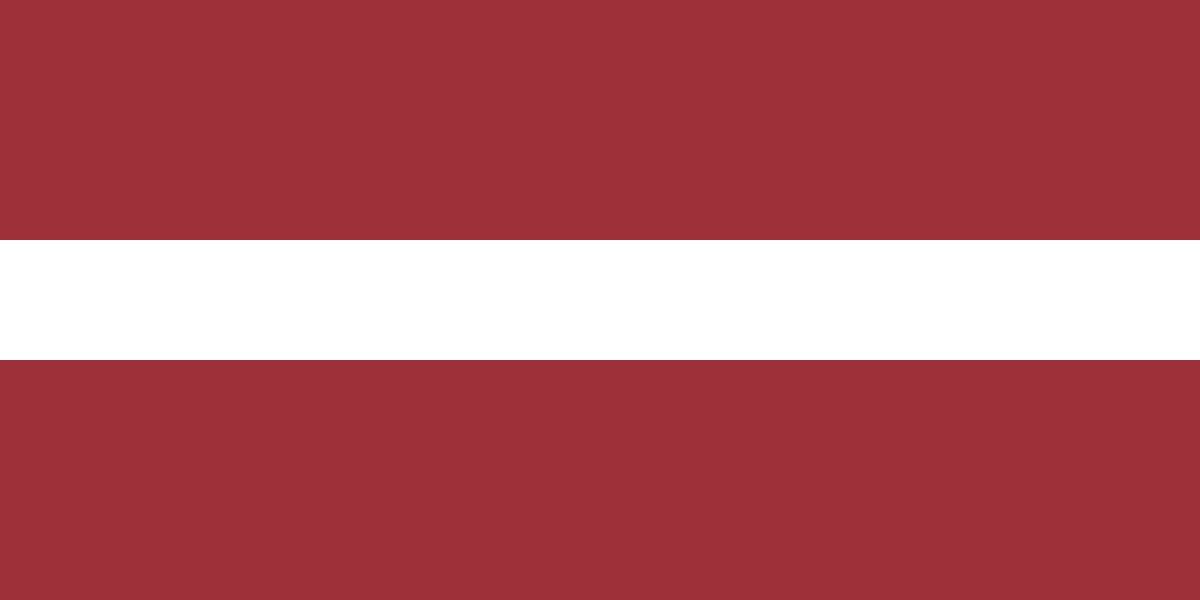 Diplomatic relations between the United States and Latvia began when independence was declared in 1918. The United States supported the separation of Latvia, Estonia, and Lithuania from Russia, and the US formally recognized Latvia on July 28, 1922. During the time before World War II, the two countries cemented their partnership and signed several agreements. Because of this partnership, the US refused to recognize the Soviet annexation of Latvia and saw it as an illegal occupation of the countries. During the occupation, Latvia and the other Baltic states occupied continued to be fully recognized as independent states by the US. With the fall of the Soviet Union, they regained their independence and Latvia reestablished active diplomatic relations with the US on September 5, 1991.

American-Latvian relations have been steadily growing since the fall of the USSR, and in 2004, Latvia joined NATO. Latvia is an active member in NATO and takes part in NATO-led operations throughout the world. As NATO members share common interests in security, Latvia laid the ground for its security policy in NATO and recognizes that security cooperation is the most effective way to protect and preserve the Euro-Atlantic region. Latvia's NATO membership creates security and stability for the country in many ways. However, arguably the most important is in the terms of the NATO treaty. Article 5 states that an attack on one NATO country should be considered an attack on all NATO countries.

The embassy of in Washington DC was established to preserve the relations between the United States and Latvia. However, the building that houses the embassy was not always a political place. Built in 1902 and the second house on Sheridan Circle, the house was designed by Waddy B. Wood. The house was built for Alice Pike Barney, a philanthropist who wanted to transform Washington DC into the cultural capital. Throughout her life, Barney hosted many gatherings in her home, including musical performances and theatrical productions. The house hosted many well-known individuals, including presidents Theodore Roosevelt and William H. Taft.

Before becoming the Latvian embassy, the house also housed the Embassy of Peru, the Colombian Litigation, and a British Officers' Club. In 1960, the house was given to the Smithsonian, who, in turn, sold the house in 1999. In 2001, the Embassy of Latvia bought the building, renovated it, and, eventually, relocated there in 2005. The house is listed on the National Register of Historic Places and the DC Inventory of Historic Sites.

Directions o f Security Policy:. Embassy of the Republic of Latvia to the United States of America. May 18, 2016. Accessed April 04, 2017. . http://www.mfa.gov.lv/en/usa/policy/security-policy-latvia-in-nato.

Latvian-US Diplomatic Relations. Embassy of the Republic of Latvia to the United States of America. December 02, 2014. Accessed April 05, 2017. http://www.mfa.gov.lv/en/usa/policy/latvian-us-diplomatic-relations.

Building. Embassy of the Republic of Latvia to the United States of America. December 02, 2014. Accessed April 04, 2017. http://www.mfa.gov.lv/en/usa/embassy/building.