From 1966 until his death in 1997, Anton LaVey, the founder of Satanism, lived in the home on California Street. The home was the site of ceremonies and seminars. It was demolished in 2001 and a duplex now stands on the site.

The Black House as it appeared in LaVey's lifetime 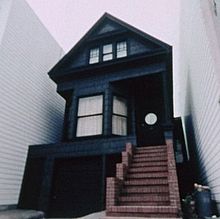 The site as it appears today 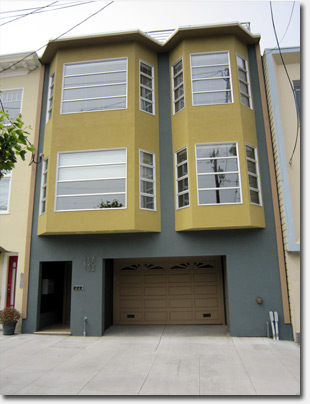 Anton LaVey founded the Church of Satan and the house at 6114 California Street served as its headquarters from 1966 until LaVey's death in 1997. During that time, LaVey not only lived in the house, which was then painted entirely in Black, but conducted ceremonies, such as the Satanic baptism of his daughter, and lectures on the occult.

In 1967, little more than a year after the Church of Satan was founded, "the Black House," as it was known, was the site of one of LaVey's more notorious events--the Satanic wedding of journalist John Raymond and socialite Judith Case, with LaVey presiding over the ceremony. The event was a media sensation, with so many reporters present that police had to cordon off the neighborhood.

LaVey lost ownership of the house in 1991 in a settlement that resulted from his separation from Diane Hegarty, but was allowed to continue living at the residence until his death in 1997. Following LaVey's death, members of the Church of Satan tried to raise enough funds to buy back the property but were unsuccessful, and the structure was demolished in October of 2001.

Although a duplex now stands at the site, the address regularly draws followers of LaVey and those who are simply curious. The new structure occupies 6118-6122, and the three 6s are regularly removed from the building's facade, presumably by admirers of LaVey.