St. John's is a generational church located in Orgas, West Virginia, around 30 miles outside of Charleston. It has maintained a generational African American congregation despite economic factors and other considerable obstacles of the last century. In that time there have been three iterations of the church, each moving in location and venue. 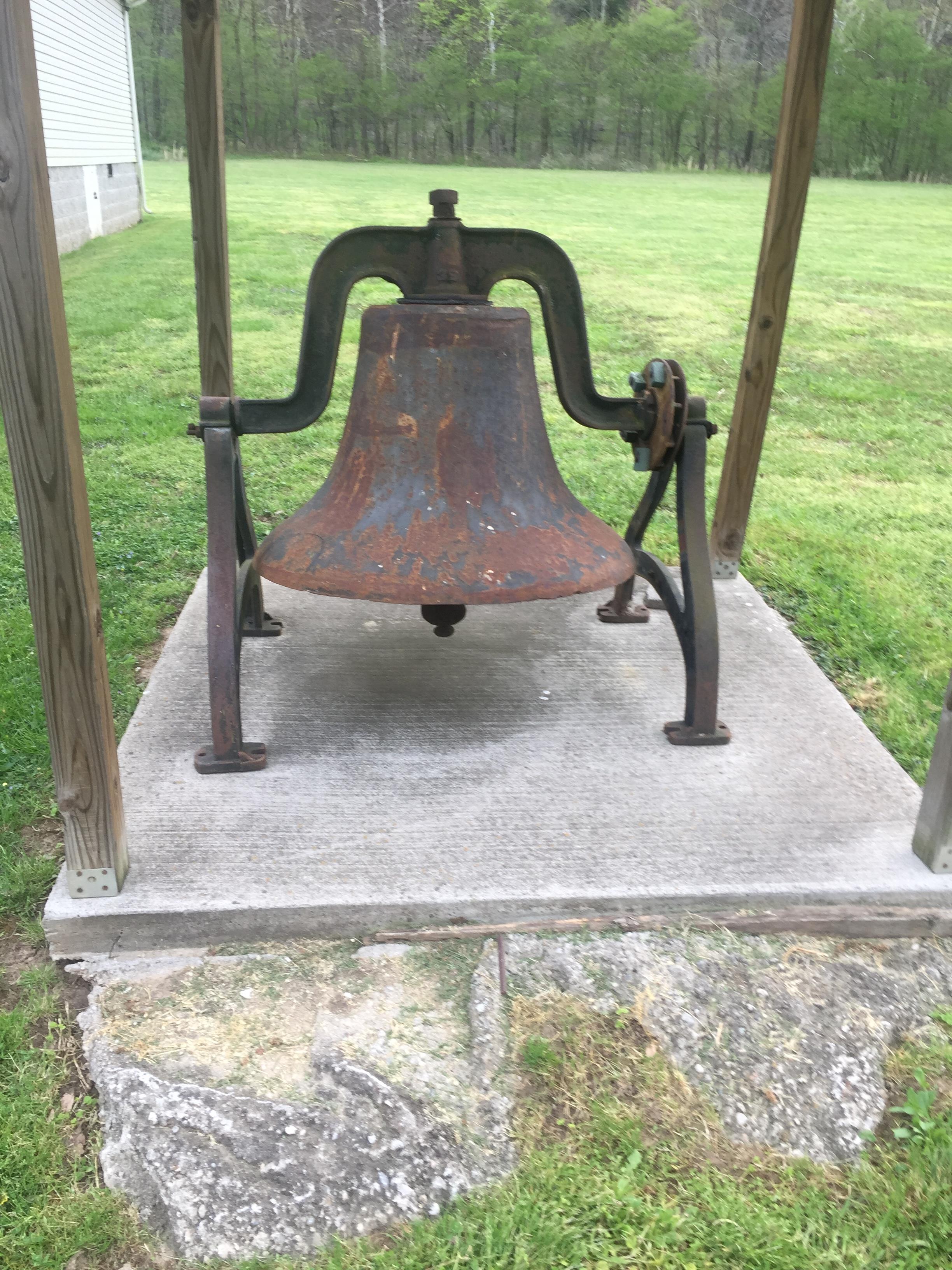 The second iteration of the church. 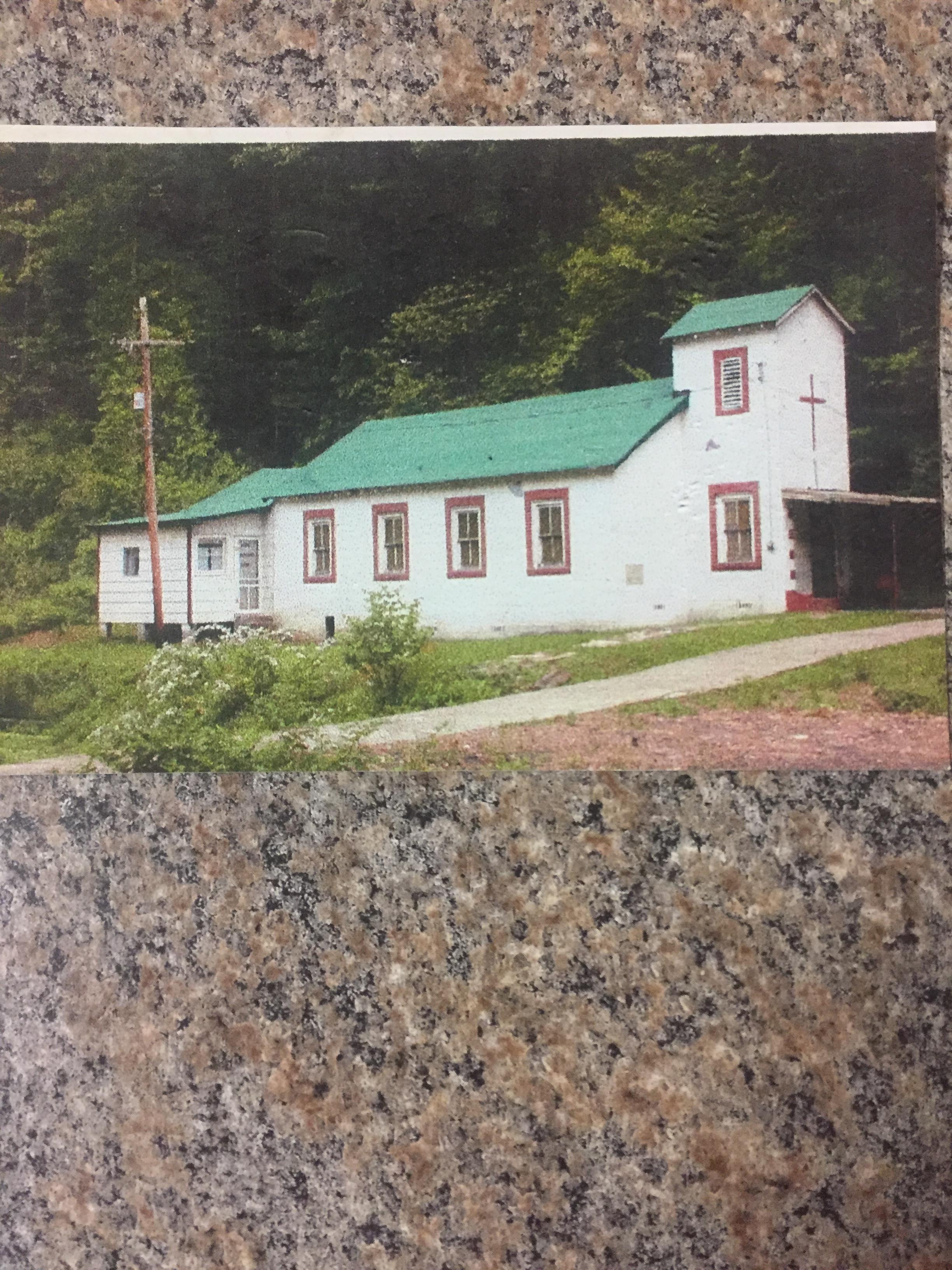 The third iteration of the church. 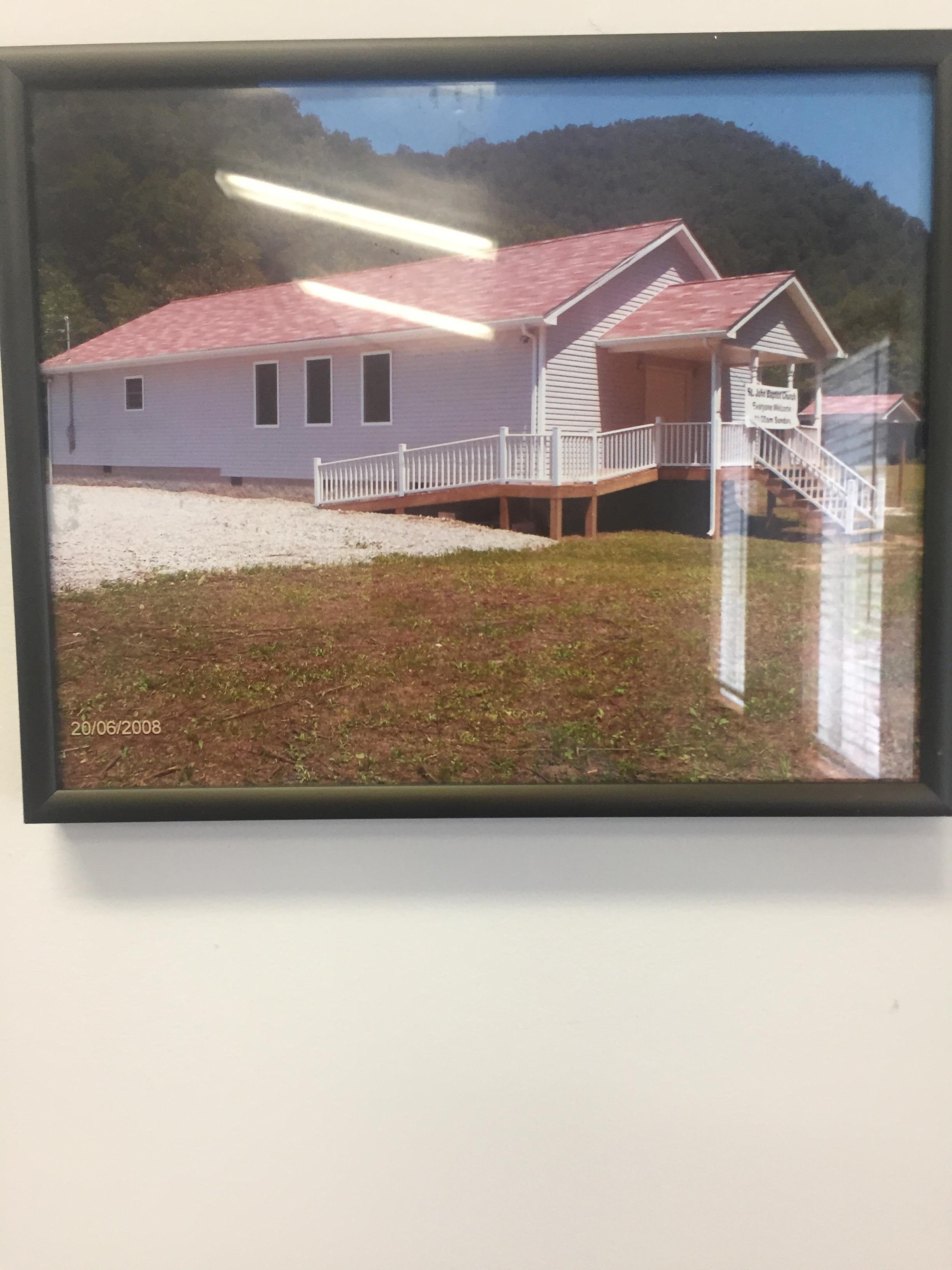 Granite stone brought from the second iteration of the church. 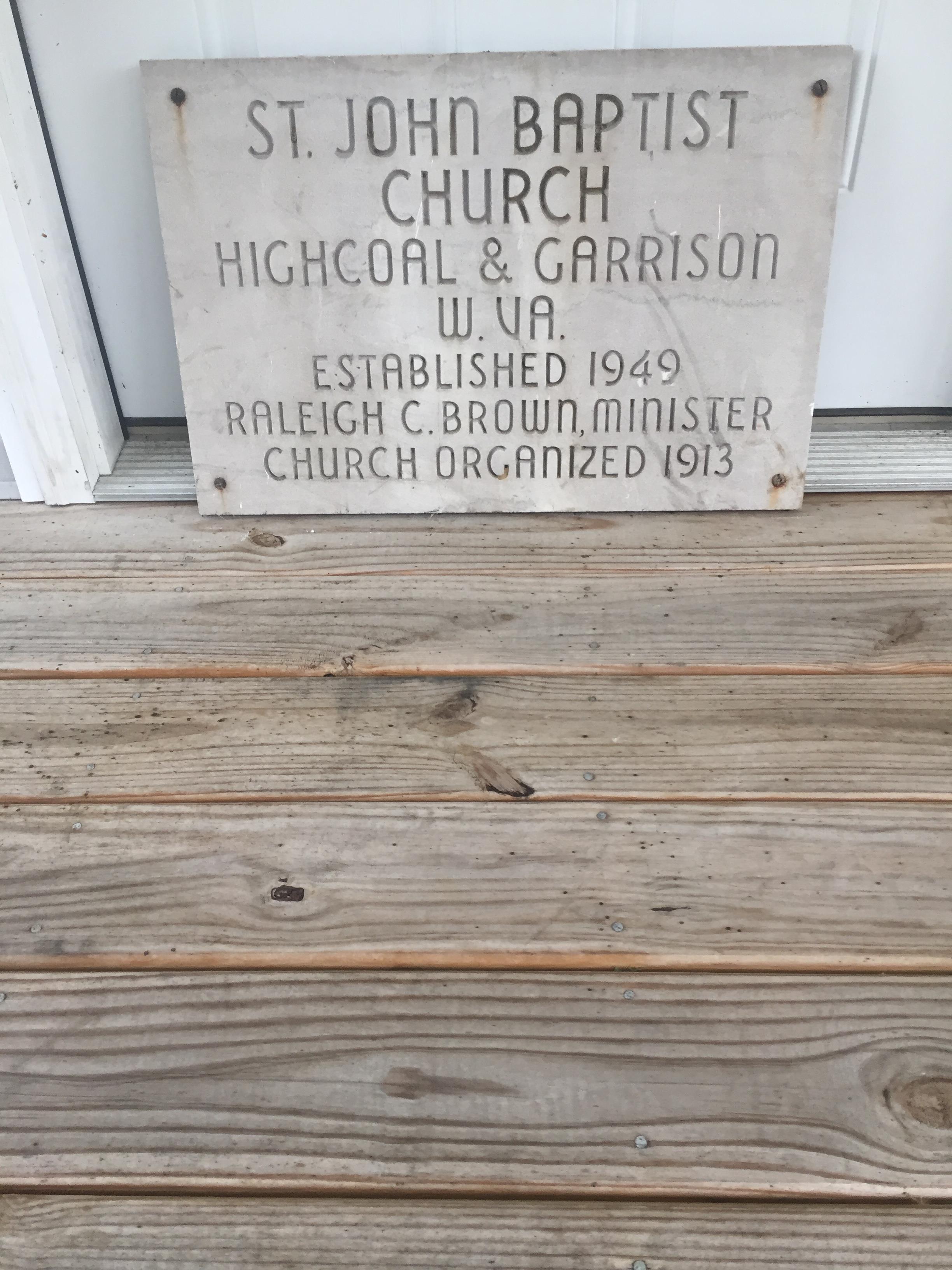 A list of ministers throughout the history of the churches, dating back to 1916. 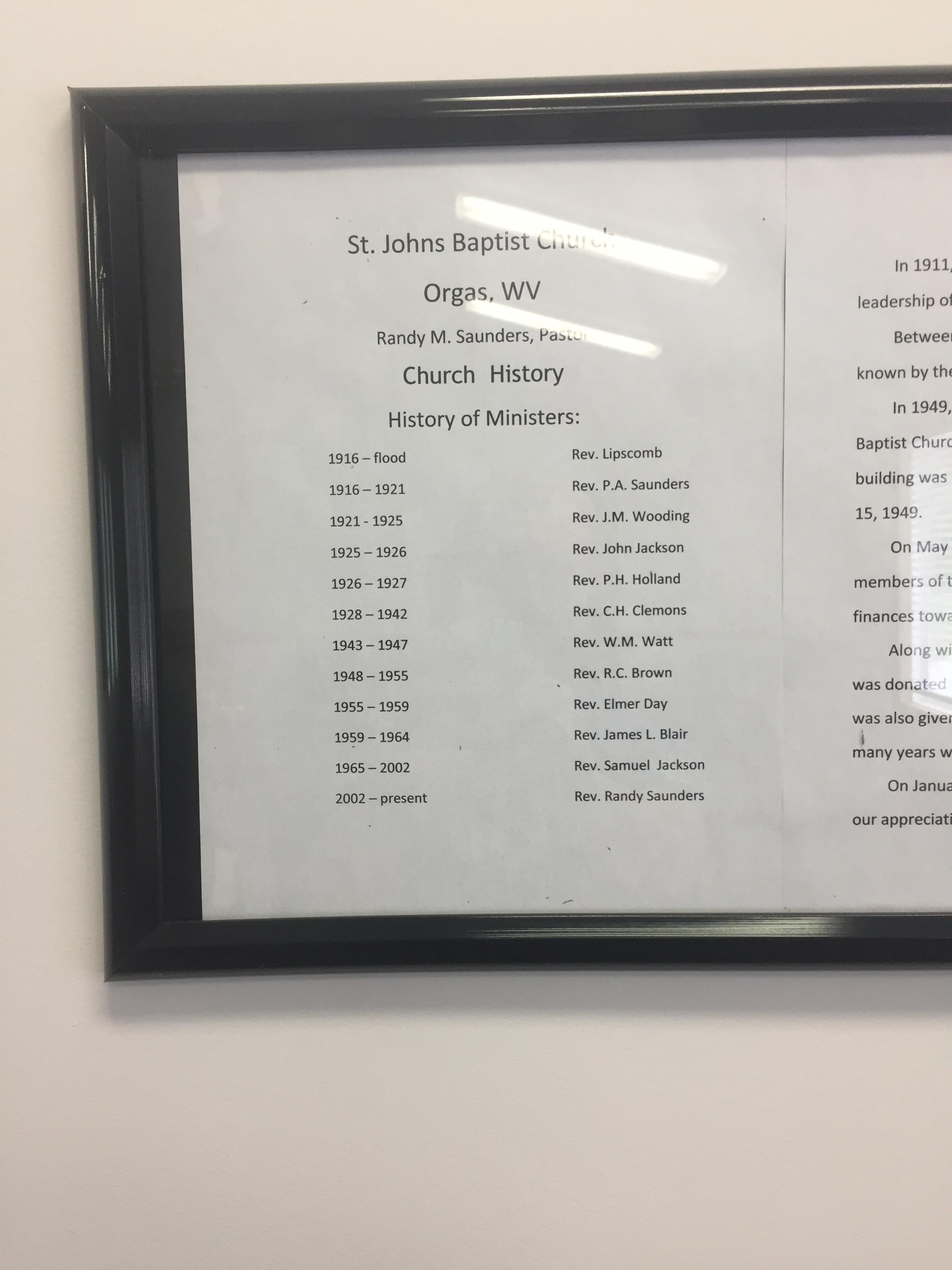 St. John's Baptist Church can trace its roots back to a rural subdivision long called Seng Creek,  located approximately ten miles east of Orgas on rural Route 3. The first iteration of the church began in 1916 officially, following leadership under J.W Dandridge and Maggie Waddle since 1911. After a donation of around $700.00 from Van B. Stitch, and land from Webb Coal Company, who owned the entire town of Garrison where it was located, as well as the company homes of the miners and company stores. Black residents of Garrison, as well as neighboring Highcoal, a Black community and mining town operated by Anchor Coal Company, worked together to gather funds and build a church for the African American communities.  The newly named Garrison Baptist Church opened in late 1916, and even had a cast iron bell that rang before each Sunday service.

Steady turnout for weekly services throughout the 1920s to the 1940s services steadily grew, and eventually drew nearly one hundred people. In 1948 construction on a new church, this time located in Highcoal began, and was completed in 1949, this one named St. John's Baptist. The new church was larger and located higher up, safe from floods. The cast iron bell was placed in the steeple and was rang regularly until the early 1960s. In the decade that followed, poor economic factors for the coal companies forced mass layoffs, which affected the African American workers first. Evicted from the company homes, many of them moved to Pittsburgh to work the steel mills, or North Carolina to work in shipping yards. The population was left as a fraction of what it once was, but the members continued to return each week.

Over the next half century, many of the remaining members, now elders of the church, had passed away, and the congregation was dwindling. In 2007, Massey Energy, looking to mine the area, worked out a deal to purchase the land and church. The current Minister of the Church, and decedent of an early reverend of Garrison Baptist, volunteered a piece of land passed throughout his family. Construction finished in the summer of 2008 along with display for the symbolic cast iron bell in the front lawn. The new location, Orgas, West Virginia, provided a central location for those remaining members, allowing for an easier commute. Sitting at the end of a suburban lane, and next to the highway, St. John's Baptist looks to have come full circle from its early beginnings.

Being located on donated land, and having a Reverend Saunders at the helm, history almost seems to be repeating itself. No matter the case, the church stands as a socioeconomic reminder for not only the heritage of a coal mining community, but the resiliency of an African American demographic in a primarily white region of West Virginia.