One of the many fortification structures that dotted the eastern American landscape during colonization, Lindley's Fort became a site of local and regional importance after a battle between Loyalist-aligned Cherokee and local settlers and militia took place there during the American Revolution. A marker now denotes the site and provides a brief summation of the site's importance and the site of the fort itself has been listed in the National Register since 1978.

Historical marker now denoting the site and a bit of its history. 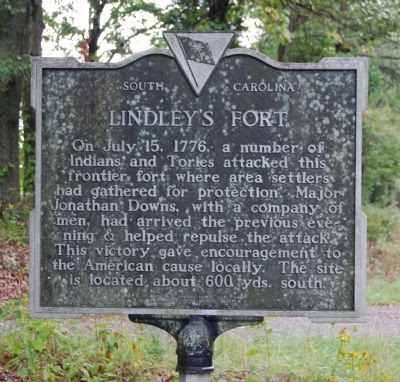 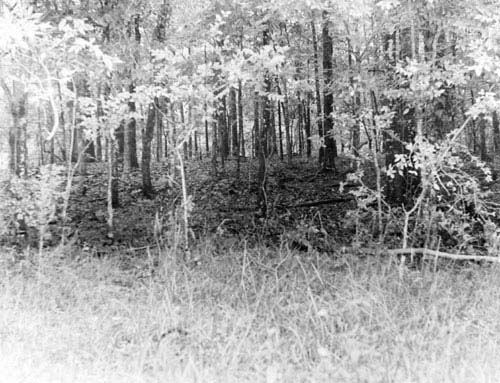 Historical marker summarizing the contributions of Major Jonathan Downs, on the reverse of the Lindley's Fort marker. 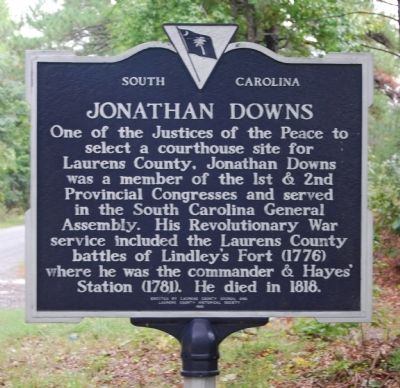 Early settlers in the colonial period often erected small fortifications for protection.  Because these were private endeavors and not undertaken by colonial governments, most of the records of these forts have been lost to history.  Similar to many frontier fortifications, it is unclear when Lindley’s Fort was built.  According to the South Carolina Department of Archives and History, it was considered an ‘old fort’ in 1776 which suggests it may have been constructed in the 1750s or 1760s. The SCDA believes it was “constructed by a private individual for needed protection in the backcountry.”

The Fort took its name from Captain James Lindley, the son of Thomas Lindley whose mill in North Carolina was also a site of action during the Revolution.  Lindley had married and moved to South Carolina, where he acquired 400 acres of land – including the site of the fort in question.  Captain Lindley was a Loyalist who served with Colonel Thomas Fletchall’s regiment and while he is known to have had Loyalist meetings in his home, there is no clear indication of whether or not the fort itself was used for such activity.

What is known is that on the night of July 15, 1776, 150 soldiers led by Major Jonathan Downs on their way through the area stopped at Lindley’s Fort to protect a small group of settlers who had taken refuge there.  The next day, a force of 88 Cherokee and 102 white Loyalists – some of whom were apparently dressed like Cherokee – attacked the fort, expecting only to meet with resistance from the settlers.  When met with Major Downs and his men, the Loyalist force retreated and was pursued.

Major Downs went on to serve as a member of both the 1st and 2nd Provincial Congresses, the South Carolina General Assembly and as a Justice of the Peace.  A marker summarizing his contributions is on the reverse of the Lindley’s Fort marker.

According to the historical marker for the site – erected in 1990 by the Laurens County Council and Laurens County Historical Society – the victory at Lindley’s Fort “gave encouragement to the American cause locally.”