At this precise location on July 2, 1917, an African American man who worked for the Hill Thomas Lime & Cement Co. on 6th and Walnut streets gave his final words to his employer as a white mob burned the building to the ground. That employer did not identify the name of the man who died but one of the witnesses to the riot, a Mr. Buchanan, related the story and the details of his own escape during the official investigation. Buchanan's testimony also reveals that soldiers did assist him and his white employer as they fled the mob but the investigation also concluded that police and guardsmen were culpable for allowing the riot to claim so many lives.

During the fires, a Black man trapped in a burning building at 6th & Walnut and called his employer. His final words: "The whole place is on fire, and if I stay it is death and if I leave it is death. I am going to stay. Good-bye" 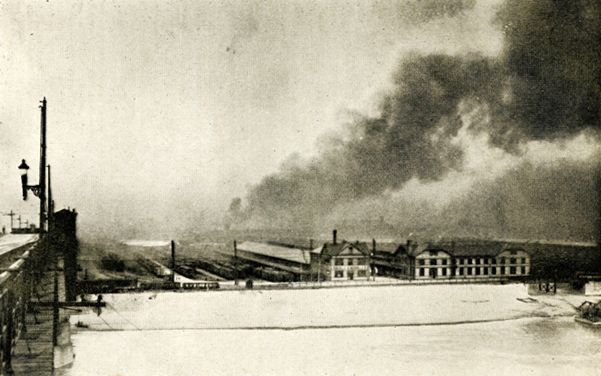 Testimony from From Ida Wells' History of the Riots:

"Mr. Buchanan says: He did not see a single soldier, excepting Col. Tripp, do anything to protect the Negroes. He formed a hollow square and made the first arrest of about 200, composed of women and men. He also took a rope from the neck of a Negro whom the mob had attempted to bang. Mr. Buchanan saw them beat men down with revolvers and clubs; white men knock Negro women down and then the white women would finish by beating them to death or nearly so.

Every Negro man that he saw get out of Black Valley alive, the soldiers would march them to the police station, badly beaten though they were, and scarcely able to walk, with their hands raised in front of them and afraid to turn their heads. The mob threw bricks at their heads and bodies, because the soldiers had their bayonets pointed at either side of them. They did the women the same way, excepting their hands were not raised in front of them. They were dodging around the soldiers to keep the mob from hitting them with bricks, stones and sticks. Their clothing was badly torn.

A man who worked for the Hill Thomas Lime & Cement Co. on 6th and Walnut streets, after the building had caught fire and was surrounded by the mob, called the manager up and said, "The whole place is on fire, and if I stay it is death and if I leave it is death. I am going to stay. Good-bye."

Mr. Buchanan escaped death by hiding in the Southern Illinois National Bank where he was employed as a messenger. C. Reeb, president of the bank, procured an automobile and took Mr. Buchanan and family, to St. Louis."