Cathedral of the Immaculate Conception

The Cathedral of the Immaculate Conception is a historic Catholic church in Kansas City. Constructed in 1883, it served as the cathedral for the Diocese of Kansas City, and today is a co-cathedral for the Diocese of Kansas City-St. Joseph. The cathedral stands on the site of the first permanent church in Kansas City, built by popular civic leader Father Bernard Donnelly in 1857; it was also the site of St. Francis Regis, the first church ever in Kansas City, built in 1835. The cathedral is known in the community for its iconic golden dome. It was added to the National Register of Historic Places in 1978 as part of the Quality Hill Historic District. Next to the cathedral are two historical markers; one commemorates Father Bernard Donnelly, while the other commemorates the St. Francis Regis church.

The current cathedral building was constructed in 1883. Image obtained from Skyline Scenes. Postcard of the cathedral, with its original copper dome, from the early 1900s. Image obtained from Squeezebox. 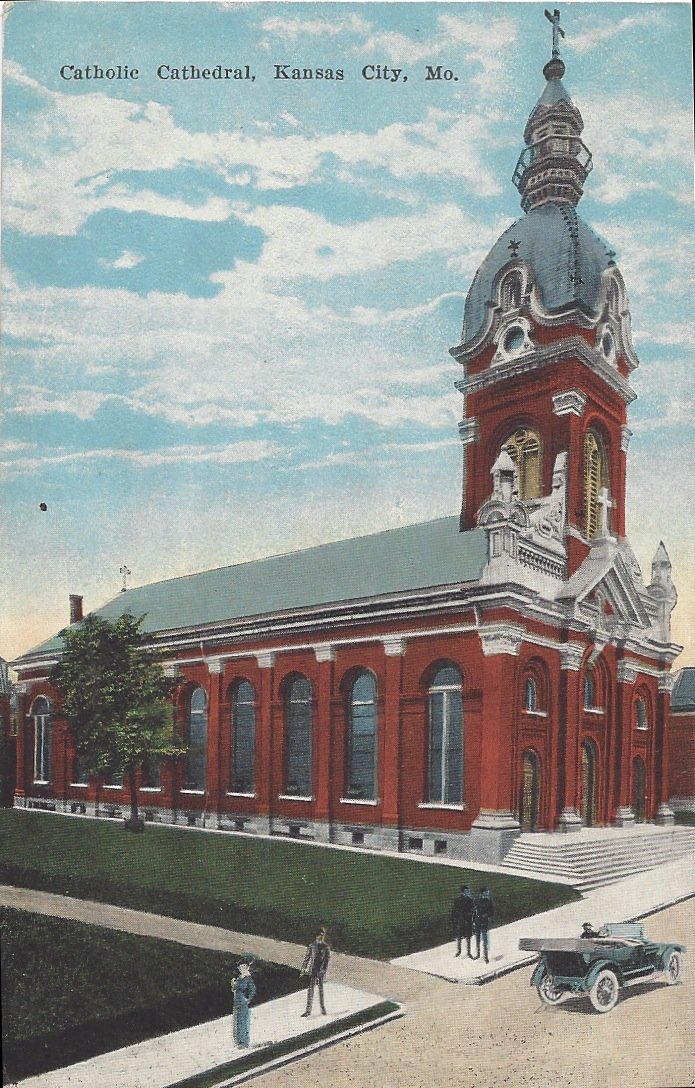 Interior of the cathedral today. Image obtained from the Cathedral of the Immaculate Conception. 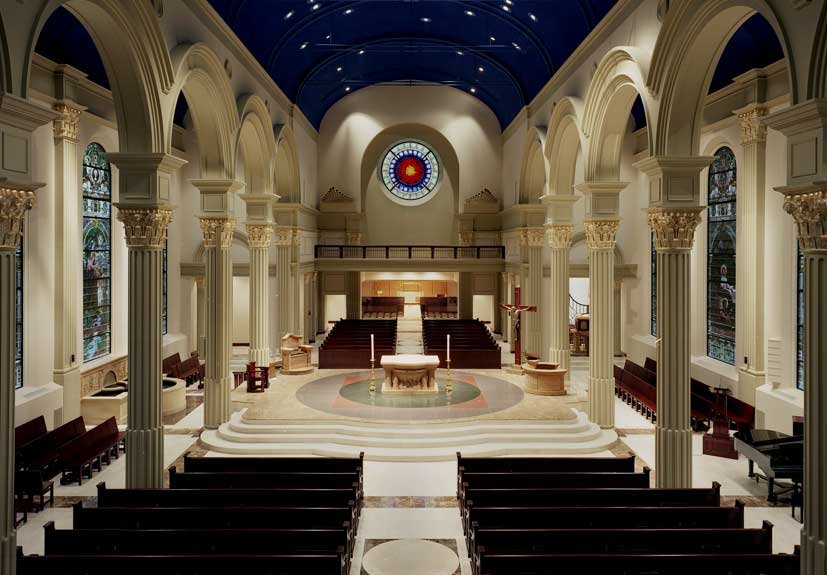 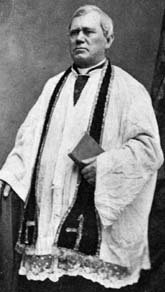 A historical marker stands outside the cathedral in honor of Donnelly. Image obtained from the Historical Markers Database. 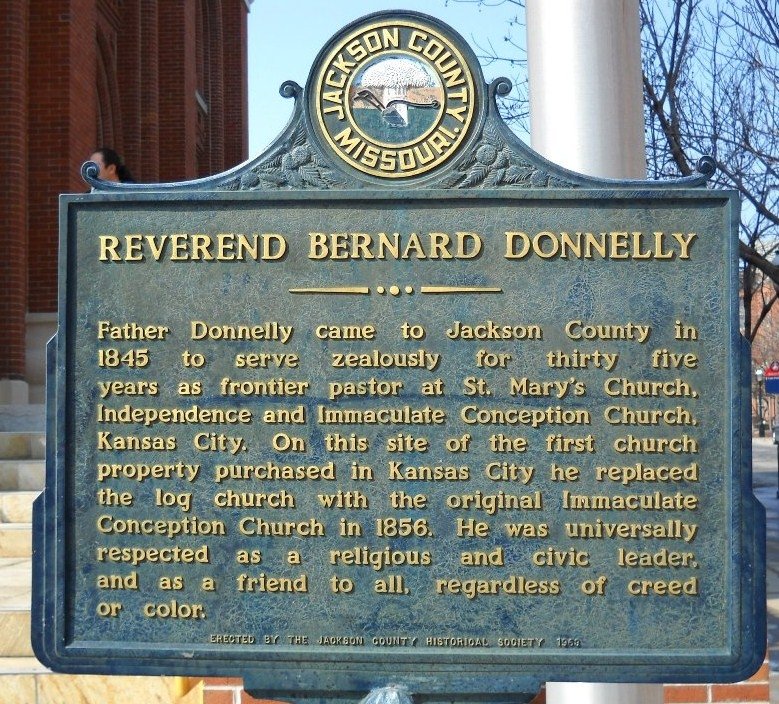 A second marker stands on the other side of the cathedral, commemorating the first church ever built in Kansas City. Image obtained from the Historical Markers Database. 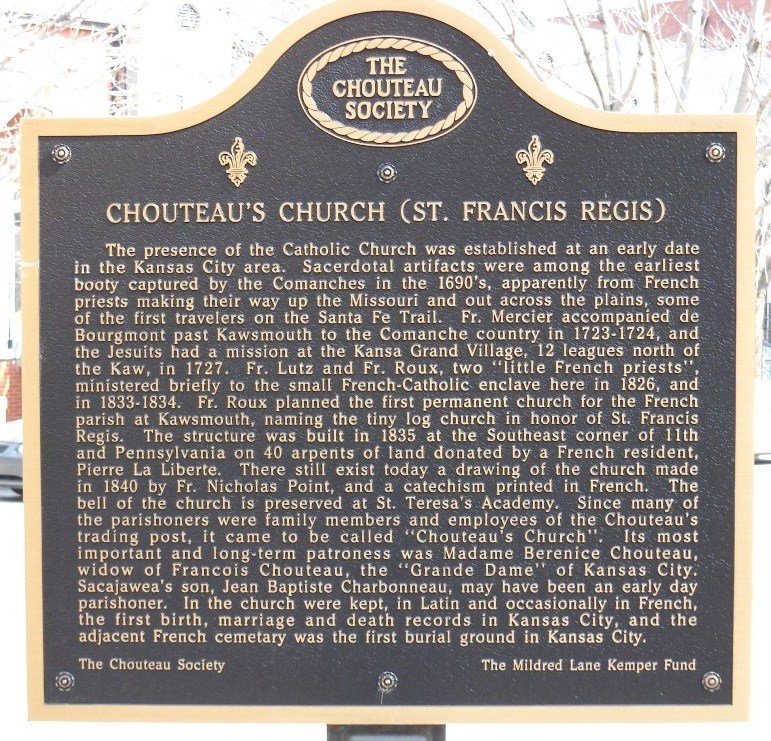 The Catholic Church has historically had a presence in Missouri; some of the area’s earliest European settlers were French Catholics. The earliest known church in present-day Kansas City was established in 1835 by French missionary Father Benedict Roux, who erected a log structure on a 40-acre plot of land donated by a local French settler. This church was named the St. John Francis Regis, and informally referred to as Chouteau’s Church (named after the Chouteau family, which operated a nearby trading post). The St. Francis Regis kept some of the first birth, death, and marriage certificates in Kansas City’s history, and also maintained the city’s first cemetery.

In 1845, Father Bernard Donnelly (1810-1880) arrived in Jackson County, Mississippi. Donnelly was born in Ireland, where he worked as a civil engineer, before immigrating to the United States and becoming ordained as a priest. Donnelly worked as a circuit priest, traveling between and serving the Catholic communities of Independence and Kansas City. The priest became a popular and well-respected civic leader in Kansas City; he was responsible for the creation of St. Teresa’s Academy, a school in the West Bottoms, two orphanages, and St. Mary’s Cemetery. In 1856 he pushed for the creation of a new brick church on the site of the old St. Francis Regis log church. Drawing from his experiences as a civil engineer, Donnelly largely planned and designed the church himself; he brought in 300 Irish laborers for the construction, and even built a brickyard to produce building materials. The church was completed by 1857 and consecrated the Immaculate Conception.

In 1880 the Diocese of Kansas City was formed to service the growing population, and the Immaculate Conception Church was chosen to be the cathedral. Around 1882 the church was demolished and a new, larger one was built to replace it. Reportedly 10,000 people came to watch the laying of the new structure’s cornerstone. The first service occurred on Trinity Sunday, 1883 and was attended by 3,000 people. At the time of its completion, the new cathedral was the tallest structure in Kansas City. It included a distinct copper dome that made the building a local landmark.

A number of improvements were made to the cathedral over the years. In 1895 a carillon of eleven bells were added, each named after a Catholic saint. In 1912 the Kansas City Stained Glass Works Company produced a series of stained glass windows for the cathedral, depicting various scenes from the Bible. In 1956 the Diocese of Kansas City and St. Joseph were merged together; the Immaculate Conception became co-cathedrals with the Cathedral of St. Joseph as a result. By 1960 the copper dome had begun deteriorating, so it was refinished with 23-karat gold leaf. In 2003 the cathedral underwent an extensive restoration and renovation. Today the Immaculate Conception continues to offer religious services to parishioners, and hosts a variety of musical performances throughout the year.

“About Us.” Cathedral of the Immaculate Conception. Accessed May 21, 2018. https://kcgolddome.org/about-us/