Veterans of the Battle of the Bulge Monument

The bronze memorial was erected in 1999 by the Central Florida Chapter of the Veterans of the Battle of the Bulge. Image obtained from Panoramio. 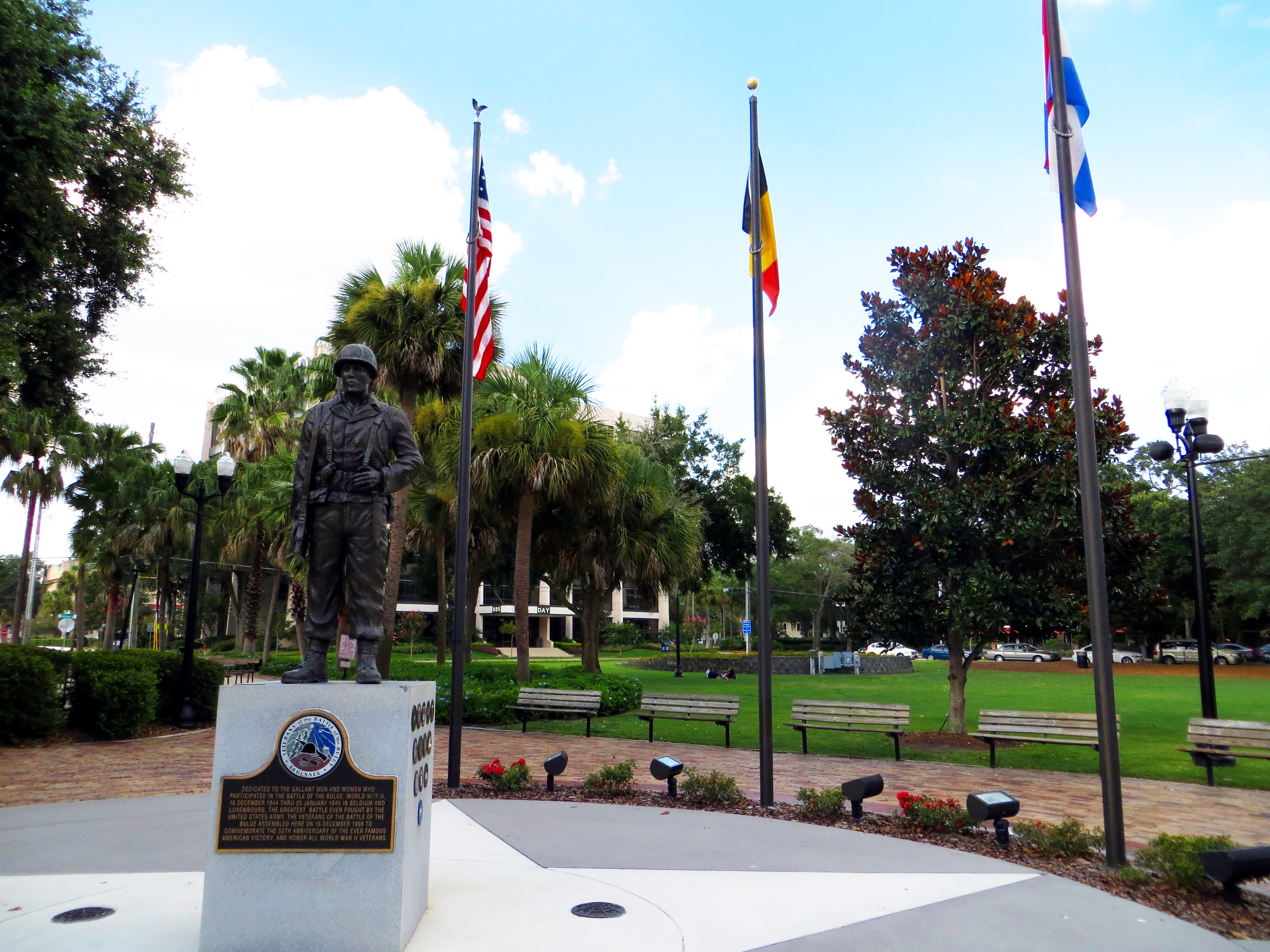 One side of the monument pedestal features a commemorative plaque, while the other sides have the insignias of participating divisions from the Battle of the Bulge. Image obtained from Waymarking. 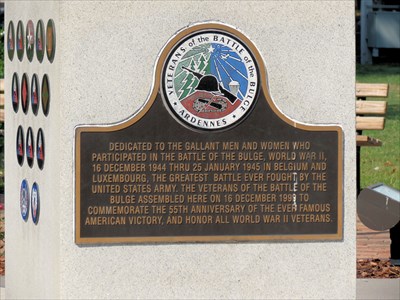 The German offensive created a large bulge in the front lines, resulting in the name Battle of the Bulge. Image obtained from HistoryNet. 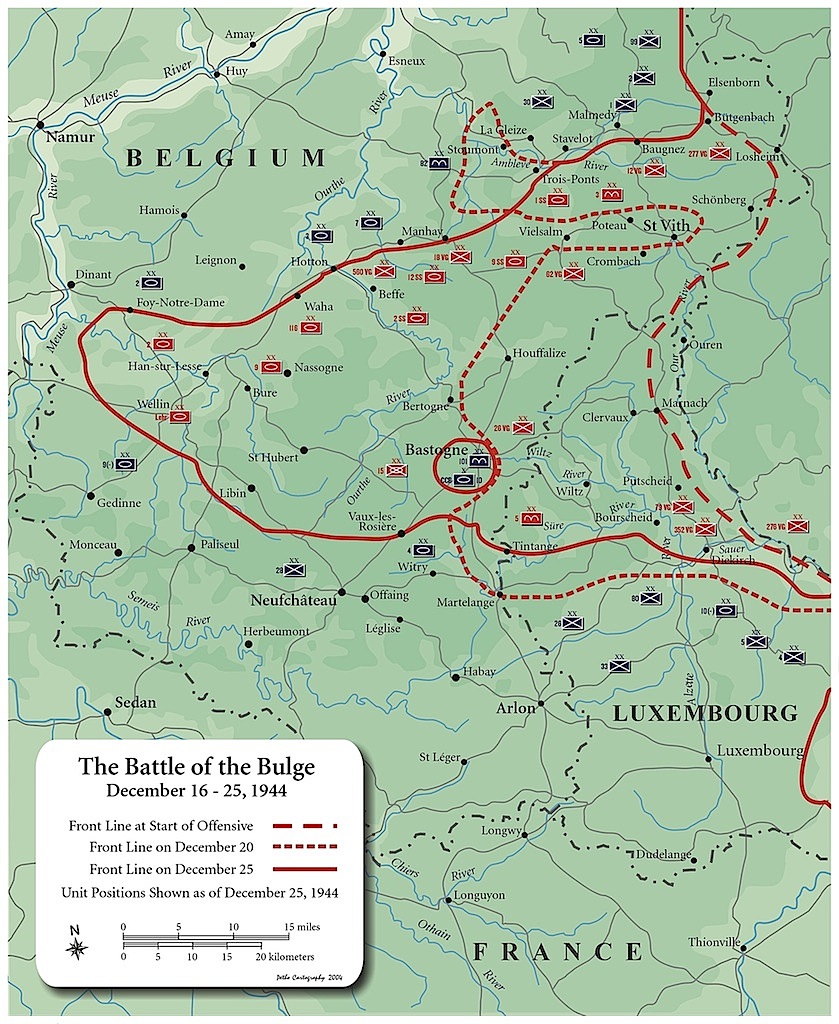 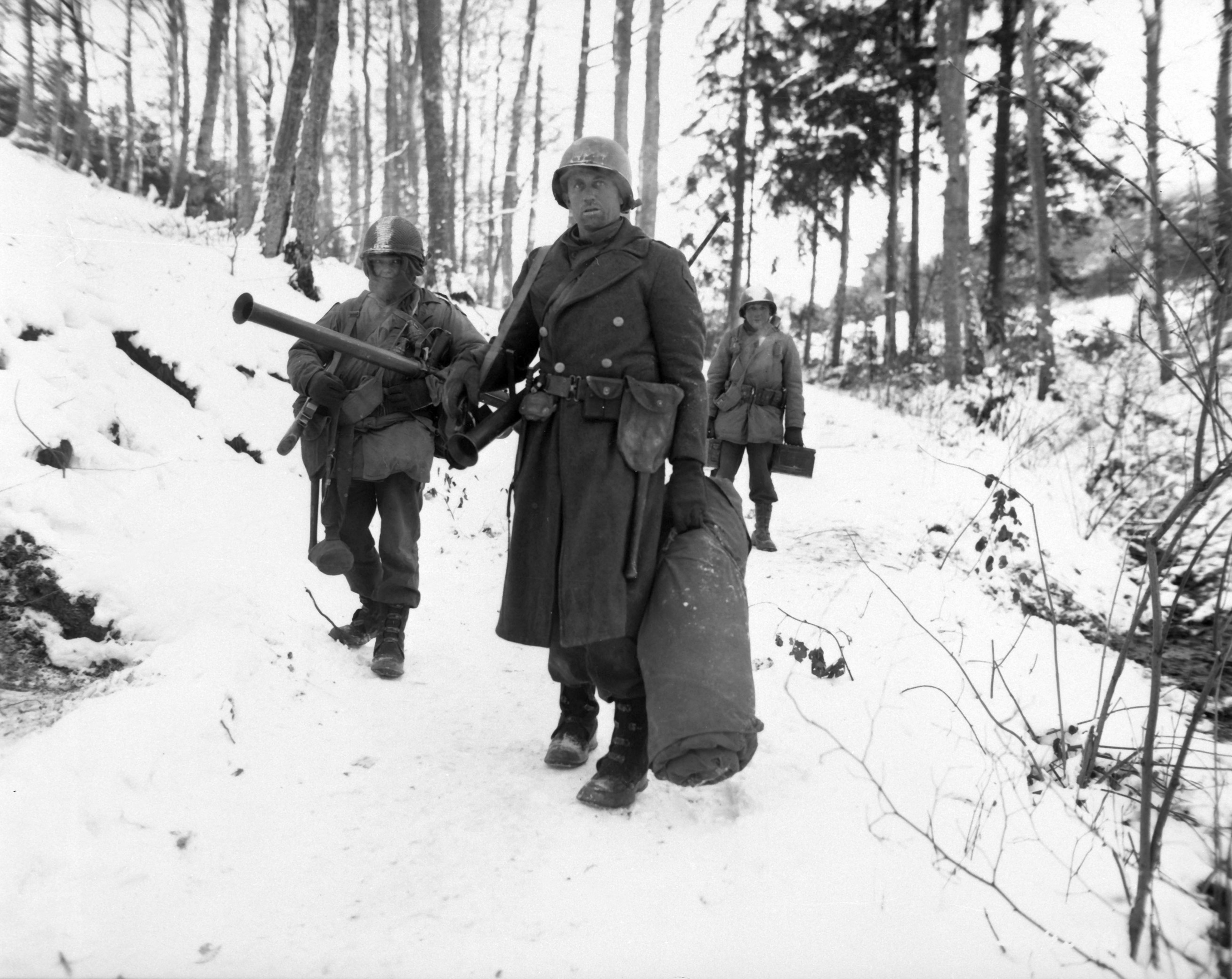 In June 1944, Allied forces (mainly American, British, and Canadian soldiers) established a foothold in Western Europe with the D-Day invasions in Normandy. By December they had liberated France, entered Belgium, and were approaching the German border. However, supply lines were stretched thin and troops were exhausted by the lengthy combat. Germany at this point was being pressured on two fronts, with American, British, and Canadian forces advancing in the west, and Soviet forces advancing in the east. To alleviate the situation, Adolf Hitler began planning a massive counteroffensive in Western Europe, much to the consternation of his generals. Hitler assembled 200,000 troops and 1,000 tanks, mostly drawn from his reserves. On December 16, 1944 his forces launched a surprise attack on American troops in the formidable Ardennes forest. The plan was to split the Allied forces in half, surround them, and hopefully force a peace agreement.

American troops in the Ardennes were caught completely by surprise, not anticipating a German attack of such scale. Heavy snowstorms hampered mobility for both armies and prevented aircraft from being used, much to the Germans’ advantage. The Germans advanced deep into Allied territory, creating a large bulge in the front line that gave the battle its name. Many American units were surrounded and suffered heavy casualties.

By late December a shortage of fuel, an improvement of the weather, stiff American resistance, and reinforcements from Gen. George S. Patton’s Third Army brought the German offensive to a halt. The Allies then launched their own counterattack, forcing the Germans to withdraw in January. While the battle managed to delay the planned invasion of Germany, German reserves had been significantly depleted. Unable to adequately defend itself on either front, Germany surrendered the following May. The Battle of the Bulge was one of the costliest battles fought by American forces in World War II. Casualties were over 100,000, including nearly 20,000 deaths.

In 1981 American veterans of the battle and their descendants formed the Veterans of the Battle of Bulge (now the Battle of the Bulge Association). On December 16, 1999, the 55th anniversary of the battle, the Veterans of the Battle of the Bulge Central Florida Chapter #18 dedicated a new monument at Lake Eola in Orlando, Florida. The monument was created by sculptor Chris Scala and is based off a similar one in Clervaux, Luxembourg. It depicts a six-foot bronze American soldier standing on top a granite pedestal. Displayed on the pedestal are the insignias of forty-one armored and infantry divisions that participated in the battle. The monument sits in the center of a star, with a light placed at each of the five points to illuminate the statue. Surrounding it is a “Circle of Honor” consisting of bricks with the name of veterans on them. Behind it is a semicircle of American, Belgian, and Luxembourg flags. Every year on December 16 a ceremony is held at the monument to commemorate the Battle of the Bulge.