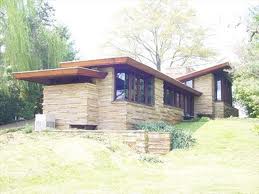 History
The house was commissioned by newlyweds Seamour and Gerte Shavin in 1949 and the home at 334 North Crest Road on Missionary Ridge in Chattanooga was completed in 1952. Seamour was a building materials salesman. It is the only building designed by Frank Lloyd Wright in Tennessee. Both the exterior and interior of the house use primarily crab orchard stone and treated Louisiana cypress wood. The stonework is reminiscent of Fallingwater. The house is sited on top of a hill to take advantage of the view of the Tennessee River and Lookout Mountain.
The home features a kitchen, den and bathroom at the top of the hill, and sleeping areas down some stairs on the lower, or eastern, side of the hill. The den/living room is the focal point of the home, featuring a large stone fireplace. Mitered glass in one corner and wood framed corner glass doors that open outward allow the eyes to wander both outside the home and around the interior.
There are many classic Wright details, such as a stunning example of a 12'x16'x16' cantilevered roof over the carport that is similar to the Goetsch-Winkler House. There are double clerestory windows with cut-wood light screens. The home has a hidden entrance. The Shavins' house contains built-ins and furniture designed by Wright, resulting in a unified design scheme.
Wright, who died in 1959, never visited the site of the Shavins' house during or after its construction. Marvin Bachman, an apprentice of Wright, supervised the construction. In 1951, Bachman was killed in an automobile accident. During the summer of 1952, Bachman's sister, Gloria, and her husband, Dr. Wilson visited Seamour and Gerte Shavin and helped them move into their new home. On the drive back to New Jersey, the couple decided to commission Wright to design the Bachman-Wilson House.
1http://en.wikipedia.org/wiki/Seamour_and_Gerte_Shavin_House