Japanese immigrants arrived in California in the mid 1860s, mainly from the Japanese province of Aizu, and settled to the north of Sacremento. This colony did not survive long due to the harsh conditions, but these early settlers are still remembered by the Japanese community to this day. Immigration to the Bay Area began to increase, and with it came an influx of Buddhist practices. By 1900, there were almost 2,000 Japanese immigrants in San Francisco. The San Francisco Young Men’s Buddhist Association was formed, and later, this organization became the Buddhist Church of San Francisco. On September 1, 1899, Rev. Dr. Shuye Sonoda and Rev. Kakuryo Nishijima arrived as the first two resident ministers for the Buddhist Church of San Francisco. The arrival of these two ministers also marked the founding of the Buddhist Churches of America. 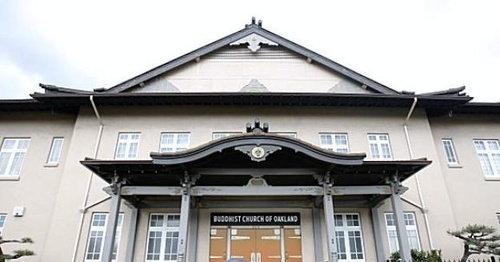 A historic shot of the Buddhist Church. 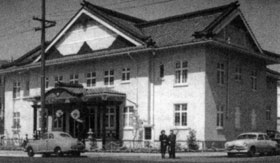 The early Japanese community spread throughout the state and temples were created in Sacramento, Fresno, Seattle, and San Jose. The Rev. Tetsuei Mizuki from the Buddhist Church of San Francisco would cross the Bay by boat to conduct monthly services and bring words of comfort and guidance to these early day Oakland settlers. Eventually, it was decided to form the Buddhist Church of Oakland.

The first church building was acquired in 1903, when a house on 7th Street was rented out. Rev. Mokuji Fujii from Yamaguchi Prefecture was assigned as the first resident minister for the Buddhist Church of Oakland in May 1905. In April 1906, the San Francisco Earthquake caused many of San Francisco's Japanese community to move to the East Bay, causing a surge in membership in Oakland. With this new membership the church was able to move to a bigger building on 6th Street.

The church was officially recognized by the state in 1911 and by 1916 a Buddhist English school had been created. As the membership continued to grow, it was decided that a permanent church building was necessary. In 1923, a large three-floor mansion on the corner of Sixth and Jackson Street was purchased. In 1926, due to some doctrinal differences, Rev. Hata resigned from the Oakland church and started the Kyudosha Mission Church with his followers, located a few blocks away.

During the Depression years, covering operating costs for the temple was difficult, even with a substantial membership. There would be times when the church could not pay utility expenses, and individual members would have to cover the costs for from their own personal pockets.

By the outbreak of WWII, tensions were high among Japanese Americans, especially as the reverse swastika symbol is prevelant in Buddhism. All members were rounded up and sent to the Tanforan Assembly Center in San Bruno. During the war years, the temple was used to store the personal belongings of the members, since it wasn't known when members would be able to return to their homes.

After the war the church members gradually returned and rebuilt their community. In 1950 the church was forced to move again due to the construction of the Nimitz Freeway. The church received a notice of condemnation from the State of California and had to move from its location at Sixth and Jackson. They decided to move to a localtion nearby, a 125x125 lot on the corner of Ninth and Jackson.The church building then had to be moved three blocks northward to the corner of Jackson and Ninth. In order to do this, the building was cut into two pieces and slowly moved to our present location.

In October 1989 the Loma Prieta earthquake struck the Bay Area, inflicting major damage on the church’s rental buildings which were demolished as a result. The church building itself sustained only minor damage, but the earthquake gave incentive to the church to have the church and apartment buildings’ foundations reinforced.

Today, this temple is the spiritual home to many Japanese Americans has been for over a hundred years.