This 19th century adobe building is one of the most unique in Albuquerque. The architect of Las Mañanitas is unknown, but their work has created a legacy for the city. One cannot miss this squat structure when driving by with the more modern structures around it. Believed to have originally been established as a home, there is evidence proving that Las Mañanitas has been expanded and renovated many times. Even though the structure had been remolded numerous times, it still maintains its original flooring, roof beams, and corner fireplaces. The structure has been a restaurant, a hotel, a pool hall, a dance hall, and a Blacksmith shop. Currently, Las Mañanitas is a privately owned building. 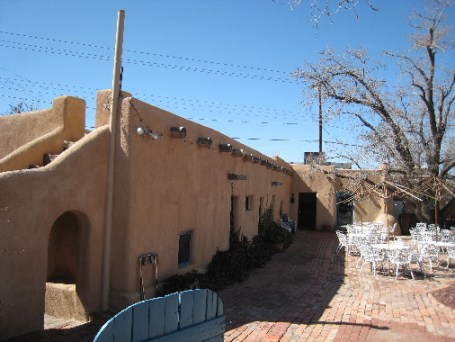 The Interior of Las Mañanitas (when it was a restaurant) 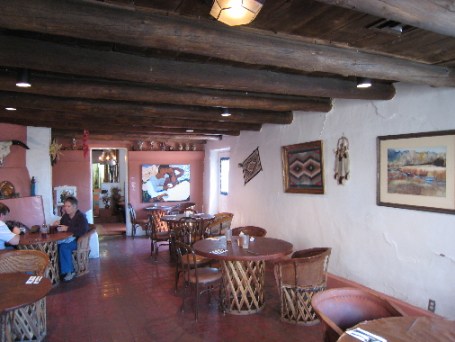 Blast from the Past: Entrance to Las Mañanitas 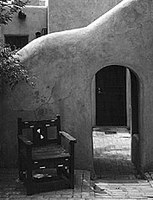 Blast from the Past: The Walls of Las Mañanitas 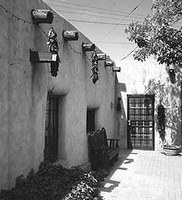 Taking the name from the traditional Mexican sung on birthdays, Las Mañanitas is a unique surviving mid-19th century adobe near the center of Albuquerque. The structure has been remodeled and expanded over the years to accommodate its several owners and proprietors, but there is evidence that its age is still readily apparent. The changes made by the many owners and proprietors over the years are part of the reason why it is a historical landmark. The varying roof heights, multiple patios, and rambling features of the house are extremely significant because they illustrate the history of the house through its owners.

The current residents of Duranes, which is an the old farming community surrounding Las Mañanitas, remember their grandparents and elders recalling that the building was a stagecoach stop on the road through the valley to Santa Fe, El Camino Real, which includes sections of the Rio Grande Boulevard.

At one point, it also operated as a pool hall and a bar, and there are tales of exuberant dances or bailes held in the large living room or sala. Also, Las Mañanitas was utilized as a hotel. One of the owners, the Speronelli family, bought the house and land at the turn of the 20th century. The family turned the building into a Blacksmith shop, and iron artifacts from the shop have been found on the property. Later, owners throughout the 20th century added rooms in Las Mañanitas, which were eventually joined together into a harmonious whole.

Despite changes to the house, many architectural features remain from its early days. For example, the original thick dirt roof still lies beneath the standard tar and gravel roofing. The massive adobe walls are made from terrones, sod blocks cut from marshes along the river. The depth of the walls is clearly seen in the low-set windows with some only measuring at a foot or so from the ground. Within the building, the original round hand-adzed roof beams support the sala roof, and corner fireplaces warm several of the rooms.

At one point, Las Mañanitas was converted into a restaurant, which served as a local eating spot in Albuquerque for around 30 years. The restaurant specialized in cooking New Mexican cuisines, such as green chile stew and pozole. The restaurant was heavily decorated with Southwestern artwork and an eclectic color scheme, and its equipales-styled furniture were made out of maguey cactus and leather. Currently, Las Mañanitas is a privately owned establishment.