Louisville Water Tower Park is home to the Louisville Water Company (LWC) original Pumping Station and historic Water Tower. Built in 1858-1860, the structures were first part of the original water system for Louisville and today host the WaterWorks Museum, an interpretive experience that explores water’s connection to the community and LWC innovations in drinking water. The Louisville Water Tower is the oldest ornamental water tower in the world, and the Engine House was renovated in 2010. The structures are listed on the National Register of Historic Places, and have been a National Landmark since 1971. 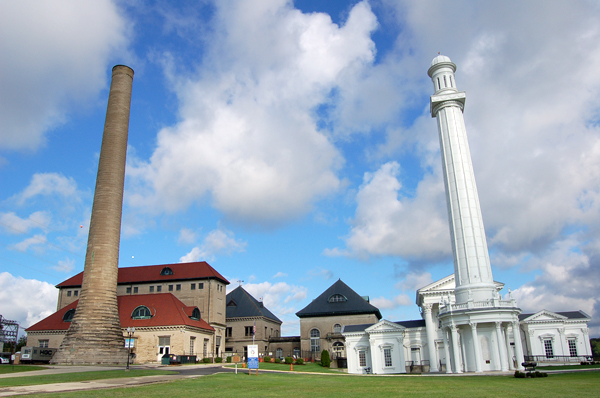 Viewed from the Ohio River (image from the Voice-Tribune) 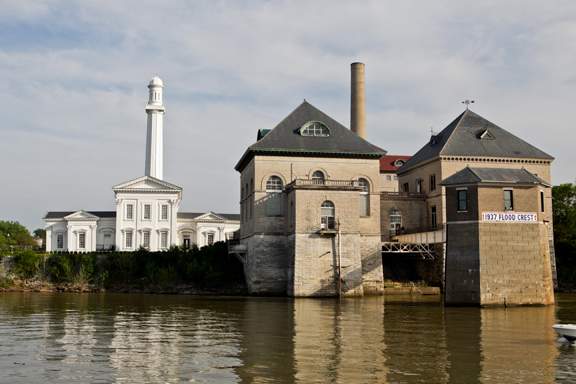 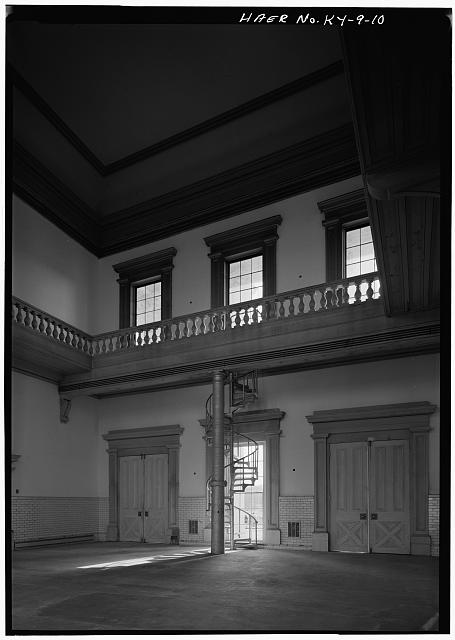 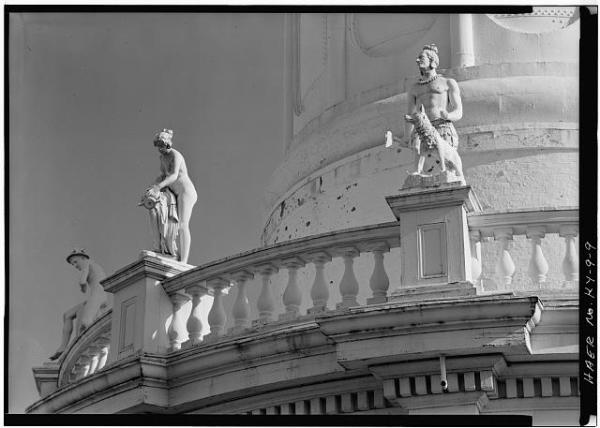 The Water Tower (image from Go To Louisville) 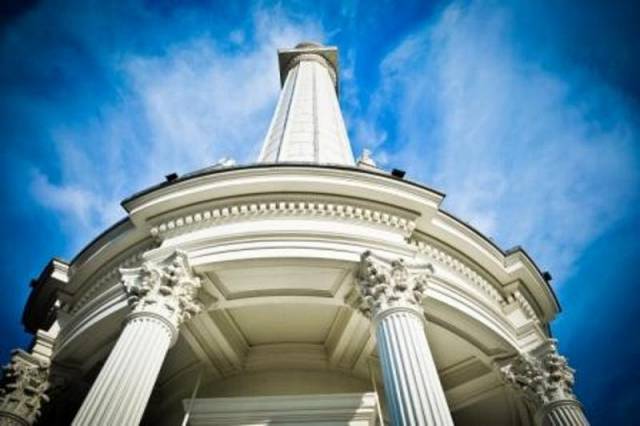 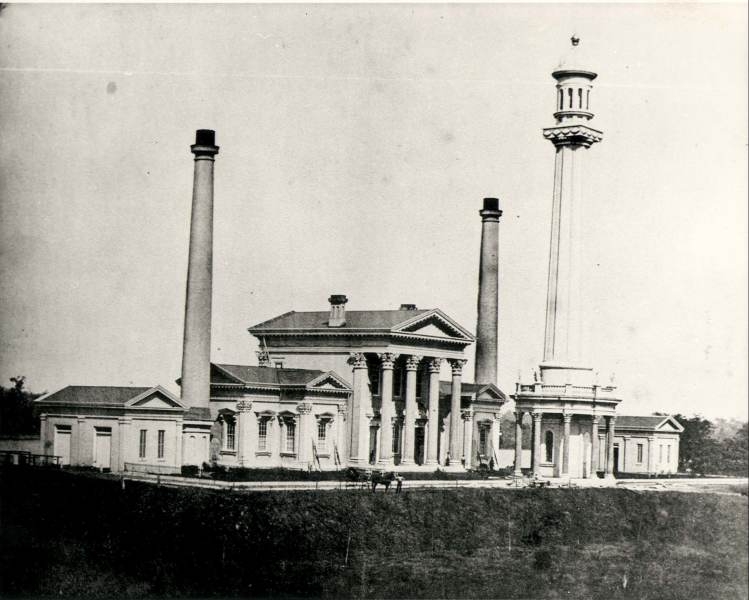 1875 engraving of the station (image from Broken Sidewalk) 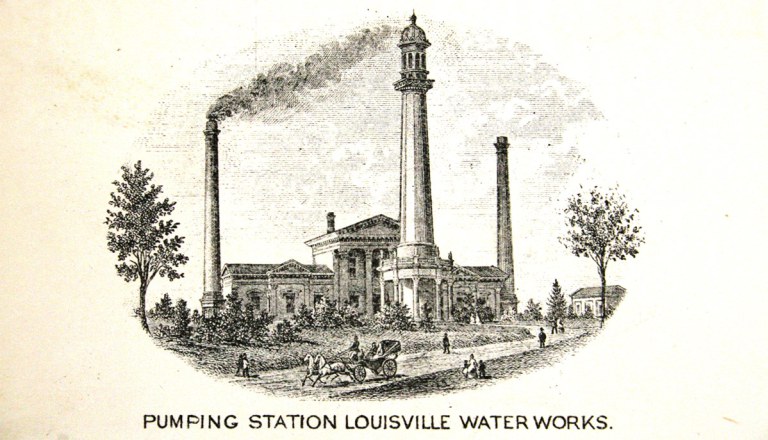 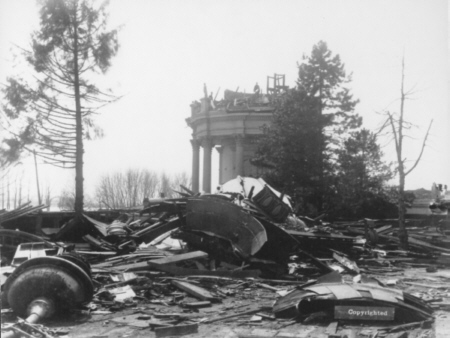 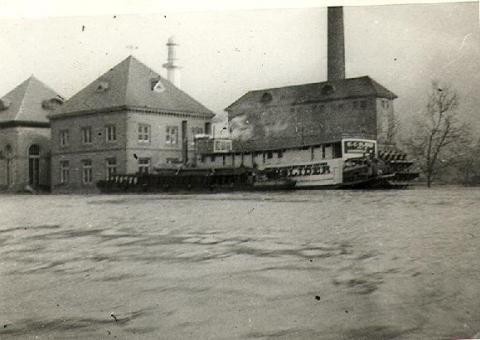 After the second cholera pandemic in the United States in the 1830s, Louisville gained the notorious nickname "Graveyard of the West," due to the tainted well-waters through which the disease rapidly spread. Several devastating fires followed in the 1850s, convincing Louisvillians of the importance of establishing a company to provide the city with water. A city ordinance passed in March of 1854 to establish the Louisville Water Company, a corporation of the Commonwealth of Kentucky. Two years later, another ordinance called for the construction of a waterworks facility, though financial difficulties and administrative entanglements put off the groundbreaking for another two years. Finally, on September 6, 1858, the cornerstone of the Engine House was laid. Though many sources mistakenly credit the architect for the project as Gideon Shryock, all primary source contemporary literature agrees that Louisville Water Company Chief Engineer Theodore R. Scowden designed the Classical Revival-style Water Tower and Engine House.

The Engine House is a two-story Roman Corinthian temple form building with a portico, before which stands the 169-foot-high standpipe tower in the style of a Doric Roman triumphal columnn, the oldest ornamental water tower in the world. It features ten life-sized classical statues, nine of mythological beings including the Roman goddess Diana, and one American Indian warrior with his dog. When the facility went into operation on October 16, 1860, it was capable of supplying twelve to sixteen million gallons per twenty-four hours with its two beam Cornish engines, two duplex steam pumps, and six Cornish boilers. It appears to have been an excellent investment, as Louisville was spared from the 1873 cholera epidemic which swept through Kentucky.

By 1885, demand exceeded the station's capacity, and construction began on a new, adjacent facility (opened in 1893) which could supply an additional eighteen million gallons per day to the city. During construction of the new pump house, the Water Tower was snapped off at the base by a tornado on March 27, 1890. The tornado also destroyed all but two of the ten statues which stood on its pedestals. Thankfully, the Chief Engineer at that time, Charles Hermany, had been Scowden's assistant thirty years before, when the tower was first built. Hermany immediately re-erected another tower replicating the original. Shortly thereafter, a new pumping station and reservoirs were built in Crescent Hill, and the original water tower ceased operations in 1909. Another of Hermany's contributions was the steam-powered pumping engine he designed with E.D. Leavitt, which went into use around the country.

At the Louisville Water Company station, George Warren Fuller, the "father of sanitary engineering" performed the first scientific water filtration tests from 1895-1897, leading to a three-part system for purification of Ohio River water which became "the basis of modern water filtration," according to the site's historic marker. The system includes sand and gravel filtration, and decreased the deaths from typhoid fever by 60% upon its first use in 1909. Louisville's water quality became so excellent that Camp Zachary Taylor was headquartered in the city during World War I in an effort to keep soldiers healthy and cholera-free before deployment. Even during the Great Flood of 1937, with the station swamped, Louisville was able to provide clean drinking water. Today, the Louisville Water Company continues to earn awards for the quality of its tap water from the American Water Works Association (2008) and the People's Choice Awards (2013), and has completed a Riverbank Filtration project using gravity tunnels and well systems to collect and filter groundwater.

The original Engine House and Water Tower are no longer functional, but are excellently preserved, listed as National Landmarks and on the National Register of Historic Places. Louisville Water has completed a full interior preservation/restoration and renovation of the original pumping station; the Engine House now holds the WaterWorks Museum, featuring the 1919 Allis Chalmers pump and permanent exhibition, a tour of the active pump station next door, and a reception area and warming kitchen. The picturesque Louisville Water Tower Park is also available for rent as an event venue.

Monday and Tuesday: Closed to Public Wednesday – Friday: 10AM – 5PM Saturday and Sunday: 10AM – 3PM