Built in 1941, Camp Barkeley was one of the country's biggest army training camps during World War II housing over 60,000 U.S. soldiers. It was so big that it encompassed 1/9th of Taylor County and was twice the size of the nearby county, Abilene. The camp was named after David Barkley (a clerical error led to the camp being misspelled), a Laredo, Texas native and recipient of the Medal of Honor for his role in a successful scouting mission at the end of WWI. The 45th and 90th infantry trained here as well the 11th and 12th armored divisions. The camp was also the site of the largest medical replacement training center in the country as well as a medical administration corps officer training school. The camp had a good relationship with Abilene and this was a factor that led to the decision to establish Dyess Air Force Base near the city in the 1950s. Today, much of the property is privately owned and cannot be explored, but County Road 257 and Highway 277 go through the site and some building remnants can be seen.

The marker as seen from highway 277. 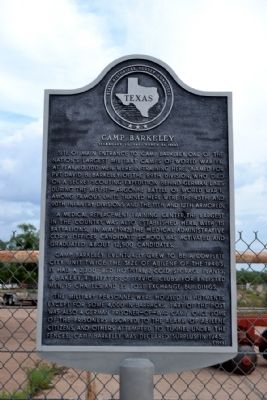 The remains of a building's foundation at the former camp. 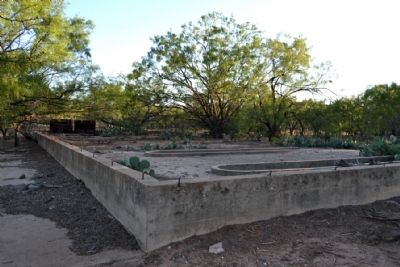 David Barkley was born in 1899 and enlisted in the army in 1917. His mother was a Mexican and as such, his last name was Cantu technically, but he decided to use his father's last name to avoid any possible difficulty joining the U.S. Army. The fateful mission took place two days before the armistice was declared on November 11, 1918. He and another soldier volunteered to obtain information on German movements, a task that required them to swim across the Meuse River in France. They got the information, but upon swimming back Barkley cramped up and drowned. He and his fellow soldier were awarded the Medal of Honor for their actions.

The military camp itself was very large and one of the largest training installations during the Second World War. It is located southwest of the location where Dyess Air Force Base was established. This air force base is located in Abilene, Texas, the town in which Camp Barkeley is twice the size of. The military camp spread over 70,000 acres over the land it occupied and had 50,000 soldiers stationed there during the peak of operations. Before it was finished in 1941, the 45th Infantry Division from Oklahoma had started their training sessions there.

German prisoners of war were also held captive at Camp Barkley. Distressingly, two months after the camp opened, twelve managed to escape which alarmed residents of Abilene. Thankfully, the prisoners were all captured within one week after their escape. The camp, which was basically a small city—complete with a hospital, four theaters, a bakery, and other buildings—was dismantled in September 1945 and ownership went back to the previous owners. The cadets and military personnel were housed mainly in hutments save for 4,000 stationed in the barracks.

Not opened to the public