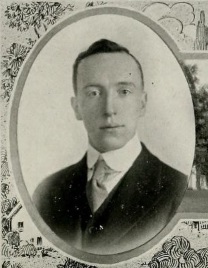 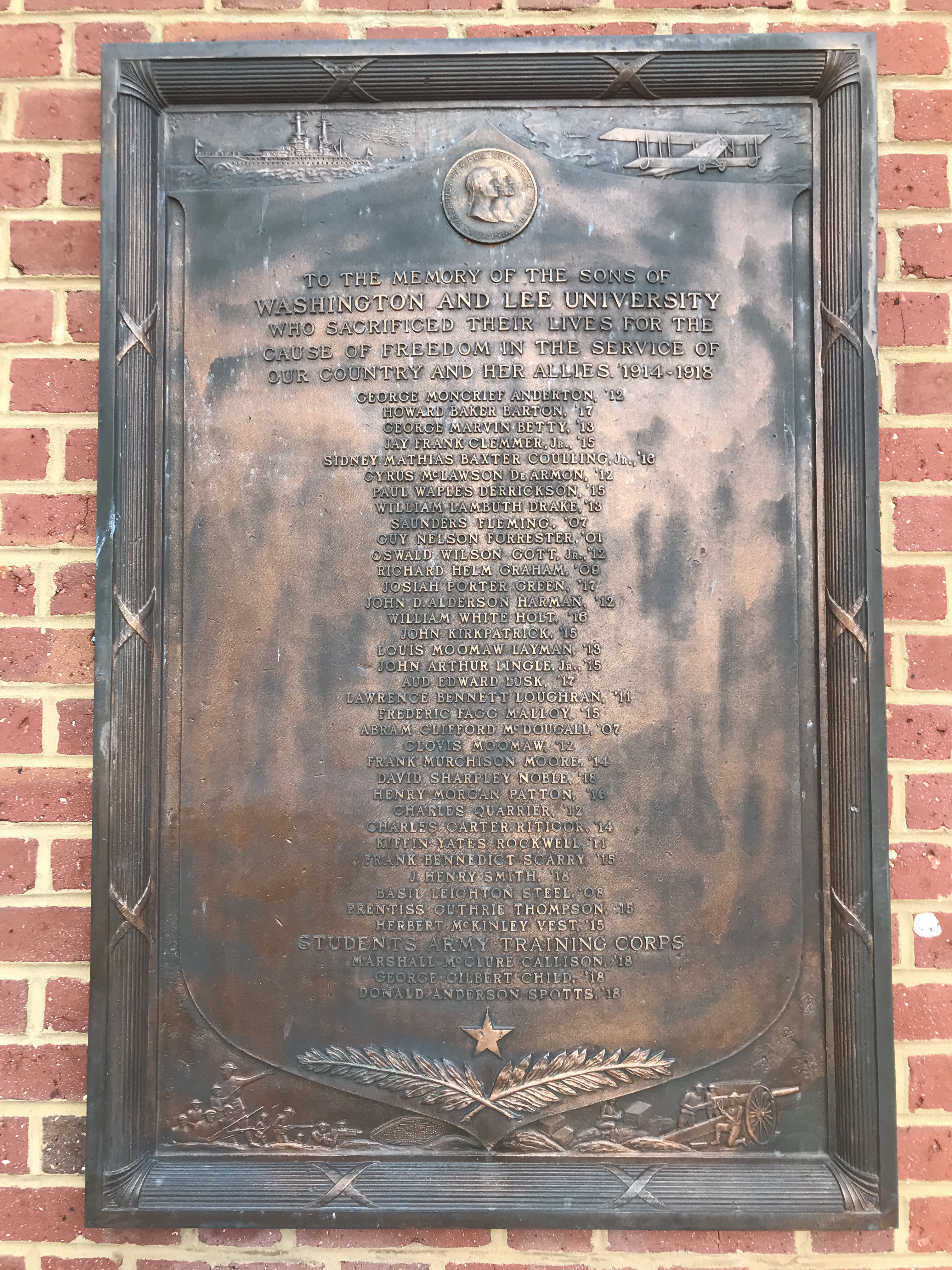 David Sharpley Noble was born on April 23rd, 1896, in Martinsburg, West Virginia. His parents died when he was young and he was raised by his uncle, Wilson M. Foulk, in Huntington, West Virginia. Interestingly, Foulk served as the State Historian during the war. Noble graduated with high honors from Huntington High School in 1914 and attended Washington & Lee University, where he was an assistant instructor in the History Department. As of June 5th, 1917, he had taken 6 weeks of training at Camp Ashville, North Carolina, was a Private in the US Army, and lived at 1517 3rd Avenue, Huntington, while attending Washington & Lee. He married Naomi (Carpenter) Noble in Charleston on April 25th, 1918, the day before he left Huntington for Camp Meade, Maryland. He was assigned to Company C of the 314th Infantry Regiment, 157th Infantry Brigade, 79th Division, US Army. He was given leave from Camp Meade to attend the commencement exercises at Washington & Lee University in June 1918, from which he graduated as one of the top 6 students with highest honors, as well as a member of Phi Beta Kappa. He sailed for France from Hoboken, New Jersey, on the LEVIATHAN on July 2nd, 1918. He ended up as a Private First Class, serial number 2711139, in the Headquarters Company of the 314th. He died of pneumonia in eastern France on October 7th, 1918.

DIES IN FRANCE OF PNEUMONIA

David S. Noble, a former Huntington boy, has died in France, according to word received by his uncle, Wilson M. Foulk, state historian and archivist, in Charleston Friday. Death was due to bronchopneumonia. Young Noble was twenty-two. He entrained for Camp Meade last April 26, the day following his marriage to Miss Naomi Carpenter, in Charleston. He was sent to France in July. He was attached to a unit which included a large number of Huntington boys. Young Noble spent the greater portion of his life in Huntington, having been reared here by Mr. Foulk, who was then superintendent of schools. His father and mother died when he was nine years old at his old home in Martinsburg. He graduated from Washington & Lee University last June, having been furloughed from Camp Meade that he might return to the school and take part in the commencement exercises. Along with his Bachelor of Arts degree, he was admitted to the Phi Beta Kappa fraternity, a scholarship organization. He was one of six to graduate with highest honors. The telegram from the war department informed his relatives that he died October 6, 1918.

– Huntington Advertiser, November 1st, 1918 (This article is courtesy of the KYOWVA Genealogical and Historical Society, from page 17 of their Summer 2015 newsletter)

Was Brought Up Here In The Home of His Uncle, Wilson M. Foulk – High School Graduate

As an added shock to mourning Huntington came the news yesterday of the death in France of David S. Noble, American Expeditionary force, who succumbed to bronchial pneumonia at the age of twenty-five. The word was received from his uncle Wilson M. Foulk, state archivist and historian, at Charleston. Death occurred on October 9.

The young soldier had been his uncle’s ward and was brought up in the Foulk home here. He graduated from the Huntington high school in 1914, and from Washington & Lee last June. He was a brilliant student and won high honrs in his university. At the time of his graduation he was admitted to Phi Betta [sic] Kappa.

On the eve of his departure to Camp Meade, April 26, he was married to Miss Naomi Carpenter in Charleston.

His memorial service was held the day before the Armistice was signed:

GOLD STARS TO REPLACE THE BLUE

MEMORY OF PRIVATE DAVID S. NOBLE WILL BE HONORED

Dr. J. Layton Mauze Will Preach on the Subject, “Our Boys Over There.”

A tribute to the memory of Private David S. Noble, who laud down his life on the altar of his country, dying in France of influenza, will be paid at the service at the First Presbyterian church this evening. With appropriate observances the blue star which has represented him in the service flag of the church will be changed to golden.

Dr. J. Layton Muaze, the pastor, will make this the occasion for a special sermon on “Our Boys Over There,” in the course of which he will lay emphasis on the necessity of supporting the united war council drive.

Even after his death he helped contribute to the cause of freedom, as $2,006.75 in war fund subscriptions, also known as the Liberty Loan, were taken at his service (NOTE: microfilmed article was damaged):

Nephew and ward of Wilson M. Foulk, State Historian, in whose home he was brought up after the death of his parents in the early years of his life.

Graduate of the Huntington High School and Washington and Lee University.

Editor of Calyx (college paper) in his senior year.

Was married to Miss Naomi Carpenter of Charleston on May 25, 1918, the day before his i…tion into the service.

A touching tribute to the first of their number to lay down his life in the Great War for freedom comes with the sounding of the appeal for the support of the United War Council drive and the subscription of $2…marked the services held by the pastor and people of the First Presbyterian Church on Sunday night.

The service opened with a…”The Fight is On.” This was followed by the reading of the First…by Dr. Mauze after which ch…congregation again joined in…”The Son of God Goes Forth…

Dr. Mauze then announced…next Sunday morning he would…on the subject “As Goes Am…Goes the World.” On that…there will be a pantomimic…expressive of the words fro…Service, on which Dr. Mauze will deliver an address. On the last Sunday night of the present month Dr. Mauze will preach the first of a series of four sermons on the theme “Has Christianity Failed?” The fourth sermon will assert the vindication of Christianity by the world war.

Battle Hymn of the Republic.

The singing of the Battle Hymn of the Republic by the choir and congregation was one of the most stirring features of the evening.

Dr. Mauze then directed attention to the service flag with its 107 stars and declared that it should be a matter for profound thanksgiving that out of these 107 only one thus far had been taken.

“The one who has been taken,” he said, “has been called from the service here to the service above.”

He then called upon Robert F. Adams, friend and Sunday School teacher of David S. Noble, to speak regarding the dead soldier. Mr. Adams spoke in simple but eloquent terms of his pupil – told of his bright, lovable and unselfish boyhood and his earnest and well spent young manhood. He spoke of his faith in Christ and like Dr. Mauze expressed the firm belief of his translation to a better sphere.

Then, after a brief but touching prayer, Dr. Mauze placed a gold star where a blue one…[huge chunk gone]…did soldiery to the tradition of American motherhood.

Speaking of their general fitness, he asked –

“Are they coming back as they were? as strong, as pure, as good?”

Speaking of the religious aspect of the case, he declared that the war had afforded an unparalleled opportunity for the preaching of the gospel to men, and added that he did not believe that the Church of God could make a better investment than to raise this money.

“Let us,” he said in his conclusion, “say to every boy on the other side, ‘remember that we love you and will stand by you until you come home.’”

At the conclusion of the service cards were distributed and subscriptions taken for the war fund to the sum of $2,006.75.

As an alumnus, he was honored at Huntington High School’s remembrance service:

…Mrs. Dickinson, speaking of the class of ’14, very touchingly referred to the esteem in which David Noble was held by his classmates. Practically every member of the class had entered the service, “fulfilling all our hopes and expectations. All will come back but one, David Noble, the most talented and popular member of the class, who contracted pneumonia and in France and died. He was a typical American boy, the embodiment of the best in the spirit of America.”…

Another heroic soul “passed on”. David was a member of the class of ’15 but he left H.H.S. after completing his Junior year. After being in the army for two months he received a furlough to allow him to return to Washington & Lee University to received his diploma and the much prized Phi Beta Kappa Key. He was soon sent overseas and in a few weeks was in the front line trenches facing the Hun. It was at this post of honor that he was stricken with pneumonia and died October 10th, at the base hospital. David Noble was ever ready to help others and it is men such as he that the world will miss.

His remains were sent home from Bordeaux on the POCAHANTAS on October 5th, 1920, and they arrived in Hoboken, New Jersey, on October 18th. He was buried in Charleston’s Spring Hill Cemetery.