Grand Central Market is a landmark of Los Angeles and occupies the ground floor of the Homer Laughlin Building. It is the city's largest and oldest public market and fills the ground and basement levels of two adjacent building - one of which fronts Broadway, and the other fronts Hill Street. The part that fronts Broadway was constructed in 1897 by Homer Laughlin, founder of the Homer Laughlin China Company. A second structure was built in 1905, which extended the original building through to Hill Street. This building was designed by architect Harrison Albright and was the first reinforced concrete building to be erected in Southern California. 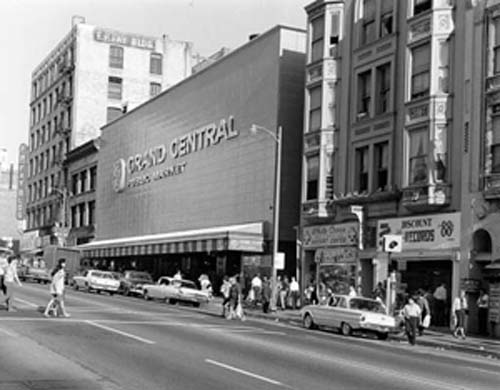 Homer Laughlin made his fortune through the company he founded, the Homer Laughlin China Company, and invested into this building once he retired. The Building was the first in Los Angeles to be a completely fireproofed with a reinforced steel structure. The original building, constructed in 1896, was only six-storeys high. It was designed by architect John B. Parkinson with Smith & Carr doing the contract work.

In 1905, the Laughlin Annex, also known as the Lyon Building, was created, expanding the building through the Hill Street. This expansion was designed by architect Harrison Albright and was the first building in the whole city to be built using reinforced concrete. Its first tenant was the Ville de Paris Department Store, which was replaced by the Grand Central Market in 1917 which still occupies the ground floor of the building to this day.

The building was initially designed in the Beaux Arts style, but it has been modified over the years, creating a totally different appearance. A tile façade was added in the 1960s which covered up the second story windows. The Building, along with the adjacent Million Dollar Theater, was renovated in the 1990s, adding residential units and creating downtown Los Angeles's first true mixed use developments in decades.

For the last 100 years, Grand Central Market has been in continuous use. At the time of construction, Broadway was the main commercial and entertainment hub of the city, with plenty of stately manners to the west on Bunker Hill. The Market has had to change with the times in order to stay relevant, and over the years has seen a wide array of vendors and stalls. Some of these include: green grocers, fishmongers, delis, butchers, dry goods, baked goods, flowers, coffee, cheese, and one vendor even sold nothing but eggs.