The Blackstone Building, which is now known as Blackstone Apartments, was constructed in 1916 and has been listed as a Los Angeles Historic-Cultural Monument since 2003. The Blackstone Department Store Building is one of architect John B. Parkinson's early works, designed in the Beaux Arts style and clad with grey terra cotta. The original Blackstone's, known as Blackstone's Dry Goods, opened in 1895 just down the street from this location. Owner Nathaniel Blackstone hired Parkinson to design this flagship store in 1917. It was sold to the Famous Department Store Company, and renovated by Morgan, Walls & Clements in 1939. In 2010, the Blackstone Building was converted into 82 apartments with ground-floor retail space and an underground parking garage.

A shot of the building as it looks today. 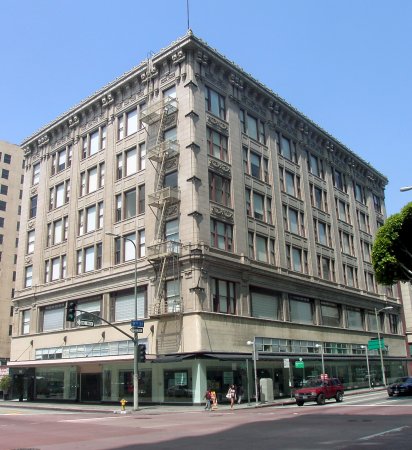 John Parkinson was one of the most preeminent architects in the early 20th century. Not only did he orchestrate the design of Blackstone's, he also played a part in designing iconic buildings throughout the city such as City Hall, Bullocks Wilshire, and Union Station. For his work on Blackstone's he decided to clad the building in grey terra cotta and featured incredibly detailed and elaborate brackets across the facade.

The building was ultimately sold to the Famous Department Store Company in 1939. The new owners hired noted architects Morgan, Walls, and Clements to oversee the extensive renovations. These alterations included a new ground-floor façade, designed by Stiles O. Clements, in a sleek Streamline Moderne style. Although not original to the building, this façade has gained significance over time as an example of later Moderne detailing.

In 2010, the Blackstone Building was converted into 82 apartments with ground-floor retail space and an underground parking garage.